The tobacco harvest is at hand and as this year’s crop awaits sale, more than 1,000 registered Kentucky hemp farmers will weigh into their inaugural hemp harvest.

There has been a great deal of hype surrounding the notorious crop since the federal legalization of hemp through the Hemp Farming Act, a part of the 2018 Farm Bill, came into effect on Jan. 1. The frenzy surrounding the unregulated CBD (cannabidiol) market and the promise of a substantial payday has brought all sorts of would-be hemp-prospectors into the fold. Tobacco farmers, hipsters, outlaw pot growers, members of law enforcement and regular folks alike all bought into what could have been no more than a snake-oil ploy.

The initial puffery surrounding hemp’s potential as a crop with untold industrial and financial potential has become a reality, especially for Kentucky’s tobacco farmers. Begging the question, amidst stagnant tobacco prices and withering contracts, is tobacco’s reign over?

While it is too early to tell in this first year, said Kentucky Commissioner of Agriculture Ryan Quarles, to seasoned farmers tobacco farmers Curtis Berry, Shack Newman and Arnold O’Reilly, the writing may very well be on the wall and they are planning for hemp’s future.

Philpot native Berry, a third-generation farmer and owner of Berry Farms, delved into hemp for the first time this year. For the past 25 years, he and his family have been, aside from fulfilling their own 32,000-pound dark air-cured tobacco contract, providing young greenhouse-grown tobacco plants to other farmers to the tune of roughly 550,000 each season. This season however, due to tobacco cuts, he was worried that he may not be able to fill his second greenhouse. That’s how a relationship began with Adam Martin and Tate Hall of Terra Farma, a Hardinsburg-based hemp processing company.

Berry planted two acres of hemp himself this year, nestled between his corn and soybean fields, but found a great deal of success in selling hemp clones to other farmers through his greenhouse operation.

“Cloning turned out great,” he said. “We cut about 90,000, which is more than I anticipated. Everything was done under one roof this year, so I’m considering two greenhouses next year. You need a separate environment for your mothers and your clones. It has been fun and exciting, just to learn something new. Things went very well.”

Outside of his greenhouse, he planted two acres, or roughly 4,400 hemp plants, this year. Despite initial fears among those entering into the hemp fray of the crop being more labor-intensive than it was worth, he’s found hemp to be far less labor-intensive than tobacco.

“I feel it has been easier up to this point,” he said. “I don’t know about the harvest yet, but it has been so far. It hasn’t been as much hands-on labor in the field as I thought it would be. The biggest challenge has been keeping it clean and keeping the weeds out. I have been doing tobacco my whole life, a lot of people have. Anybody that is in tobacco has been doing it forever, but it is 11 months a year. … The only month that we don’t do anything with tobacco is February.

“With hemp, we run from March to July, we quit cutting and then it is drying and selling it. The price on the tobacco market, it is really not fair. We are selling tobacco 20 years ago for the same price that we are today. What do you think we can go buy, equipment-wise, or fertilizer or chemicals? You think we can buy stuff today for what we did 20 years ago? Not even close.”

While the money has not rolled in yet, the relative ease that he has had with plant, especially in terms of his greenhouse, has gotten his motor running in developing a possible hemp-infrastructure.

“If it is all it is cracked up to be, I might just chuck tobacco,” he said. “You can make more money in the greenhouse than working out in the fields. I see, just like Newman and everybody else, when they do their harvest and things turn out good and they make a little money they are going to double their acres. It is a no brainer, they’ll double, especially if it is more profitable than tobacco.”

Newman, a third-generation Philpot farmer, purchased his clones from Berry Farms for his first attempt at growing hemp. He has 3.5 acres of hemp this year among his 1,000 acres of row crop and 100 acres of tobacco and, like many farmers around the state, is looking at the potential of hemp as King Tobacco’s legitimacy languishes in a downward spiral.

“Tobacco is, I won’t say on its way out, but it sure seems like it,” Newman said. “The weather now with more rain and the 3 or 4 inches of rain at one time makes it more difficult for us to clear a profit on tobacco. We wanted to get to know it. We have taken a lot of the tobacco process and used it in growing our hemp. We pretty much just put it out there, added fertilizer and micronutrients and let it grow and just hoped and hoed.

“I don’t want to get anybody’s hopes up, but hemp has been a lot less labor-intensive so far. We are not done and we haven’t made any money yet, so we will see. Had I not gone with the clones it would have been far more labor-intensive.”

Fifth-generation McQuady farmer Arnold O’Reilly began getting into the hemp game four years ago under Kentucky’s pilot program and has reached the pinnacle of hemp-farming, vertical integration.

The industry, especially in its first year, is full of potential pitfalls and money-hungry brokers trying to make a quick buck off of shady deals and hemp cons, which propelled O’Reilly, who became tired of dishonest middle-men, to develop his own product this year. His operation, with the popularity of CBD, has expanded to an undisclosed lab where an intimate team works to grind, process and pull the cash cow CBD oil.

“We do it from start to finish,” he said. “I have my grower license, I own my own genetics. We grow it, we process it and we bottle it. Everything that we say is here is here. It isn’t coconut oil, you get what I say you are going to get. I get results on every batch and bottle and I say, ‘this is what it is.’ When they get a shipment they also get my lab results. This is what you paid for. We are prepping to put a barcode on it so folks know what field it came out of. You can make a lot more money than you can on tobacco, corn and soy. You have to stay ahead of the curve.

“We started the first year and I was more or less from a farming background, so I did seed production and then I grew fiber from it,” he said. “The next year we started doing the CBD. That was where the money was at, so that is what we stuck with. It has all changed. We found out the fiber will probably be the future of it, but right now everybody going crazy over the CBD market.”

While the season started with worries, tobacco farmers have found that, despite the hype, they already have the infrastructure and the means to find success in hemp. Next year will most likely see those initial hemp-prospectors falling off the wagon after a costly education among the weeds, tobacco worms and aphids. But the seasoned Kentucky tobacco farmer, given that they already have the infrastructure, means and stoic ingenuity only a salt of the earth farmer could possess, will most likely double down on hemp. The blood is in the water now and only the initial returns will tell if all of the hype was worth it and the potential of a brave new agriculture world will take root, ending the reign of tobacco in Kentucky.

“Hemp has given farmers the opportunity to be completely vertically integrated,” Quarles said. “There will not be another crop in our lifetime where we can watch it go from zero to its full potential. I grew up on a tobacco farm like other Kentuckians and it has been interesting to watch tobacco farmers easily adopt a new crop. It is my observation that these guys are quite innovative and have continued to lead the charge.

“Hemp, like tobacco, is a specialty crop, meaning that it isn’t like corn, wheat and soybeans. It involves a lot of labor and provides the technical expertise that has quite frankly been lost for two generations. Every week I get pictures sent to me by hemp farmers getting their welders and duct tape out and inventing new equipment and harvest techniques. I’ve been there, I watched my dad do it when I was young and now, to see it again, it is so symbolic of the Kentucky farmer.

“We punch above our weight class,” he said. “Give us some bailing wire and twine and we will make anything happen.” 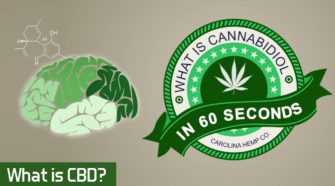 What is CBD? In 60 Seconds (Cannabidiol)