Between 80 and 90 percent of hemp farmers in Utah failed to bring in a profitable crop last year. Shysters and empty prom-isers populate this nascent industry.

Cannabis is not like alfalfa. It’s an intense crop requiring careful planning and over-sight, with plants prone to trauma that can induce some strange, money-losing results if farmers aren’t careful.

Shane England, a Fillmore hemp farmer and the co-op’s president, hosted the event, bringing together curious information seekers with industry fi gures, vendors and agriculture consultants of all stripes.

One couldn’t help but walk out of the co-op’s introductory session feeling conflicted. On the one hand, farmers have a chance to enter an industry on the ground floor, one with far more profi t potential than, say, alfalfa or fruit and vegetables.

On the other hand, it’s plain; the hemp growing business is fraught with danger.

More than one local farmer experimented with the crop in 2019 and lost money.

First-time local hemp grower Mont McPherson, for instance, described his experience to KSL in November, calling it a “train wreck” when 30 percent of his seeds failed to germinate.

England says the idea of a co-op is exactly for the purpose of increasing the odds of success, with membership granting access to a wide range of helpful information, knowledgeable consultants, discounted material and more—including how not to get swindled by unscrupulous seed sellers.

“We as a co-op are going to make sure that everyone is on track,” he told attendees. “Everybody’s following a good budget. Everybody’s getting the hemp they need. We are going to have ag tech services for everybody.”

Farmers will even be able to share equipment and get help come planting and harvest time, he said. “We’re going to have a lot of vendors in our co-op,” England added. “We’re going to be doing a lot of group buys, driving down the costs.”

Memberships will be more than affordable, too, starting out at $50 for a basic annual membership to $100 annually for an expanded pack-age of services and steeper discounts. Members will have access to an online educational arm, Hempstart.biz, dedicated to walking farmers through hemp production step by step, off ering profes- sional insights into the best science and farming methods utilized by the industry’s leaders.

Still, entering the hemp business is probably not for the faint of heart.

The Bottleneck Is Real

The biggest obstacle to profi table hemp farming, felt all over the country last year, is the lack of processing capacity within the CBD oil extraction leg of the industry, where all the real money appears to reside at the moment. CBD oil is just one of the myriad benefi cial byproducts of cannabis, used in numer-ous popular over-the-counter health products. But getting high-quality oil in any abundance is easier said than done.

Farmers hoping to cash in on a bumper hemp crop last year—those who were actually able to grow a crop—have found that people they’ve contracted with to buy the hemp had to back away after harvest because oil extractors couldn’t process all of the biomass dumped onto the market.

“The bottleneck right now is in the processors,” said Allen Naylor, a financial consultant and co-op member. “Because they took on too much biomass…everybody dumps their stuff on the market at the same time.

“When we entered this market and joined the co-op, we realized this was really going to be an issue for our farmers.”

Naylor said farmers shouldn’t be totally discouraged because there are literally about 24,000 beneficial uses for cannabis, with CBD oil just one among that number.

Naylor didn’t downplay the risks, however.

“There’s a lot of risks. I’m not going to say this industry is risk free,” he said, illustrating his point with a sidebar about GenCanna, a multi-billion dollar hemp processor in Kentucky, one of the first real industry leaders, mired right now in litigation and fighting liens on its business assets over unfulfilled contracts.

“If you guys are getting your oil processed through them, as a farmer, who’s holding the bag?” Naylor asked rhetorically. “So the best thing we can do is mitigate the risks, we can’t get rid of it all the way. At least we can reduce it as much as possible.”

Wayne Jenkins, a farm consultant in the audience, urged farmers to be wary of false promises of money at harvest time, and added that crops shouldn’t even be planted without ironclad agreements in place, the buyer’s money in a third-party escrow account awaiting delivery.

“Without a prudent, money in the bank guarantee that they have a market, they shouldn’t be planting,” he said.

England was more optimistic. He said he thinks the co-op can break the bottleneck for its members by making Millard County home to consistently high-quality hemp production.

Despite the roiling CBD oil market, hemp production in Utah is likely to produce more than a few success stories in the coming seasons.

The state is an ideal place to grow cannabis. With the right seeds and growing plan, farmers should be able to produce good crops every season.

John Willoughby, of Willoughby Produce, is a co-op member. He offered some insight into how local farmers can break into the hemp business.

He said he believes a plastic mulch, drip tape irrigation system on raised beds offers the best chance for success for those just starting. He said he uses the method with his 30-acre pumpkin crop.

“Our increase from plastic mulch to without it is almost double,” he said. “I highly recommend it. You save water…it makes a big difference on your crop.”

He said the plastic mulch system helps with weed control and prevents evaporation, which saves on water compared to flood irrigation.

David Lee, a farmer at Pine Valley Farms in Hurricane and a co-op member, is a seed producer. He told attendees he is producing seeds bred to grow in Utah’s climate. He is bringing his experience and expertise in seed genetics to the co-op.

“We really pride ourselves on the genetics that we have. The main thing we’re looking to bring to the co-op is the right genetics. That’s the key from the beginning. Everybody knows good seed is what matters. And getting a good healthy start, too,” he said.

The keynote speaker at the co-op confab was Jeffrey McPhee, vice president of horticulture for Imperial Seedlings of Imperial Valley, Calif. His company sells hemp producers seedlings tailored to their specific growing environment. He said he and England are still negotiating a discounted service plan for local farmers.

He told audience members the area’s high desert region has a capacity to produce 3,500-4,500 pounds of cannabis biomass per acre.

He said the growing season is shorter than in other areas of the country, but by using seedlings, farmers can shave as much as 40 days off the period between planting and harvest.

“Utah is very viable. The cannabaceae family of plants does well in high elevation, high steppe deserts,” he said.

McPhee urged prospective co-op members to be careful entering the business, but said they shouldn’t be totally discouraged by others’ horror stories.

McPhee said with the proper guidance any hemp farmer can achieve profitability.

For more information on the Great Basin Hemp & Farm Co-op, contact England at 801-628-8061 or via email, This email address is being protected from spambots. You need JavaScript enabled to view it.
. 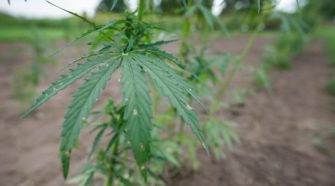