PILGER — A search for new opportunities led Loraine and Gene Ott to the Cooper Family Community Center in Pilger on Friday.

They weren’t alone. The place was packed.

“The cattle market’s down,” she said. “We need another option.”

So did 175 others attending the Midwest Hemp Forum, some driving two or three hours to the event. They came to hear speakers, to connect via Skype with presenters from California, Oregon and Tennessee, as well as Canada, and to network with others who might also want to plant hemp in fields where corn and soybeans have traditionally grown.

The event was the third in the state sponsored by Midwest Hemp Forum, said representative Colin Fury who served as moderator for the day.

The group has taken it upon itself to educate farmers about hemp-growing possibilities now that the option to grow industrial hemp has been approved by Nebraska lawmakers.

Historically, hemp has been used in the creation of textiles and canvas. On ships, hemp was used for sails, ropes and riggings, plus hemp resin sealed the wood. Taxes were paid with hemp, and in 1942, Hemp for Victory programs were begun. The plant eventually lost favor when confused with marijuana.

Today, all that’s changed the introduction of a Farm Bill which looks favorably upon hemp as a cash crop.

Hemp and marijuana differ primarily in the amount of tetrahydrocannabinol or THC concentrated in each. Generally speaking, hemp is generally considered so low in concentration of THC as to be non-psychoactive.

Cannabidiol or CBD, is extracted from the flowers and buds of marijuana and hemp plants. It doesn’t produce intoxication, and is claimed to contain medicinal benefits.

Five parts of hemp plants can be harvested including the leaves, grain, fiber, hurd and roots. Seeds can be used in the formation of paints and plastics, and can be pressed for oil.

The hurd or shiv is the core of the plant stalk, and can be used for animal bedding or in the formation of building materials. Hemp flowers are used for CBD oil, and the roots have their own niche market.

However, there are a lot of up front costs to planting hemp, Fury said, with seeds as high as $1 each and seedlings running at $5. But with hemp’s grain and fiber as a crop, and hemp used to create bio-plastics, the crop is a big thing of the future, he said.

“CBD is a gold mine right now, especially when compared to corn and soybeans,” he said.

The plant’s flowers are harvested similarly to tulips, its grain like corn and soybeans, and its fiber like hay. However, the plant requires tedious care.

Andrea Holmes is a professor of organic chemistry at Doane University in Crete. She stated, “We are tearing down the stigma of marijuana.”

She offers an on-line course for farmers to become certified for growing hemp and for other future jobs. Those interested can register on the Doane College website, or at cannabis@doane.edu.

She spoke on a three-member panel including Dr. Ismail Dweikat, professor of Agronomy and Horticulture at UNL; and Dr. Allen Jenkins, economics professor at the University of Nebraska-Kearney and author of the book, “The Return of an Ancient Partner: Hemp.”

“Over time, specialty markets for hemp will develop like it has for wine and beer,” Jenkins said.

Pierce farmer Paul Hilkemann came to the forum to find out for himself.

“We came to get as much information as we can, and are open to possibilities for profitability, to see how hemp would work in our operation.”

After all, he said, right now, “farming is tough.”

The next hemp forum will be held at the York Auditorium in York on Oct. 11, at 9 a.m. 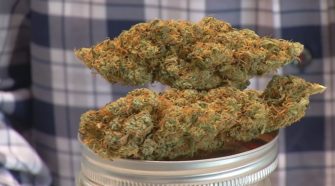