Just under two years after legalizing medical marijuana, voters in North Dakota will weigh in on legalizing recreational cannabis throughout the state by casting ballots for or against Measure 3 on November 6.

In many ways, Measure 3 is a response to the state’s inaction over the previous ballot initiative.

“In 2016, 64 percent of North Dakotans voted for medical marijuana. Since then, the legislature has dragged their feet and tore the bill apart,” Cole Haymond – an advisor to the Legalize ND Campaign – told Civilized. “People just want their medicine, but North Dakota’s medicinal marijuana program is not operational yet because they keep dragging it out. Now they’re saying the end of 2019. Well this bill – Measure 3 – circumvents that. People can get their medicine starting December 6, if this measure passes.”

And that’s not all Measure 3 will do. Here’s an overview of what is arguably the most liberal cannabis ballot initiative that’s ever been voted on.

Measure 3 would make it legal for anyone 21 or older to purchase, possess and consume cannabis in North Dakota. They would also be allowed to grow cannabis in their homes. And unlike the 9 states that have legalized recreational use thus far, Measure 3 would not limit the amount of cannabis that North Dakotans can possess at any given time, nor would it restrict how many cannabis plants they can grow at home.

“Measure 3 has no cap on possession or cultivation,” Haymond told Civilized. “It is the most liberal recreational bill that this country has seen on the ballot. But on the flip side, when you look at it from a free-market perspective, it’s also the most conservative since conservatives argue that less regulation is better for everything.”

Conservatives also despise taxes, which should make Measure 3 appeal to them because it does not create a cannabis-specific tax. Those special excise taxes are common in recreational states, but North Dakota plans to do things differently.

That doesn’t mean the state won’t reap any benefits from legalization though.

“While there’s no tax in the bill, every marijuana sale would still be subject to the state’s sales tax and whatever sales taxes municipalities may have,” Haymond explained. “So it will effectively be a 7 – 12 percent tax rate, even without a specific cannabis tax in place.”

And if the state wants to tweak the system to add an excise tax, there’s a mechanism in Measure 3 that would let lawmakers do just that. But they won’t be able to rewrite it willy-nilly.

“If the legislature wants to change the specific language of the bill itself, they need a two-thirds vote,” Haymond said.”If they want to add things that are not in the bill, that would take a simple majority. So if they wanted to add taxes, add regulation, add zoning restrictions [for cannabis dispensaries]-that will only take a simple majority.”

But one thing they can’t do is drag their feet on implementing the ballot initiative.

“If the majority of North Dakotans vote in favor of this, then the bill comes into law on December 6th,” Haymond explained.

So the state legislature would have to address the initiative within a month of it passing or else it will kick in whether they like it or not.

On top of allowing recreational cannabis use, Measure 3 will give many drug offenders a fresh start by expunging nonviolent cannabis convictions from their records and sealing court documents relating to those cases (unless the offence involved a minor).

That could change the lives of thousands of North Dakotans whose careers are hampered by old pot busts.

“One in seven North Dakotans have some marijuana charge on their record – in some way, shape or form,” Haymond told Civilized.

That number is absurdly high considering that not many residents of the Peace Garden State actually consume cannabis.

“Per capita, usage of marijuana by North Dakotans is ranked 47th [of the 50 states] according to FBI crime data. It’s 47th in usage, but the 6th in marijuana-related arrests. And the state of North Dakota’s population is less than a million. So a lot of people could help their families more and seek out a fruitful career without being handcuffed by a mistake-not even a mistake but possessing a plant.”

But while Measure 3 is the most liberal ballot initiative to date, it’s not an ‘anything-goes’ approach to legalization. Selling cannabis to people under 21 would remain a crime. And minors caught with marijuana would be subject to the same penalties that they would face if busted with alcohol. That could mean mandatory counselling, up to 30 days in jail and a fine of up to $1500.

Haymond says there’s no shortage of support for Measure 3 from both sides of the political aisle.

“We do enjoy support from Democrats and Republican elected officials on this issue. This is not a partisan issue. And North Dakota has a longstanding history of this libertarian streak – this states’ rights streak that I think will ring true on November 6th.”

And if the same voters who approved medical marijuana in 2016 return to vote in the midterms, then Measure 3 will likely pass as well.

“What that 64 percent [support for medical marijuana] shows is that although that North Dakota is a conservative state, this isn’t a partisan issue. This is a personal freedom issue and a criminal justice issue. Measure 3 opens it up so that people can possess a plant freely without fear of being incarcerated.”

On top of that, the Legalize ND Campaign’s other supporters include the Marijuana Policy Project and NORML as well as PBS host Rick Steves, who visited North Dakota recently to campaign in favor of legalization.

Unfortunately, there’s no shortage of adversaries for Measure 3. Those include North Dakotans Against the Legalization of Recreational Marijuana as well as a group called Healthy and Productive North Dakota, which is backed by Project SAM (one of the most influential of the anti-cannabis lobbying groups in America today).

Then there’s an assortment of other groups who are rallying around the Vote No On 3 campaign.

“If you look at their coalition, it’s pretty clear who opposes us: the healthcare industry, pharmacies and pharmaceutical associations – and you can wager your guesses as to why since the marijuana industry would hurt the pharmaceutical industry,” Haymond told Civilized. “Then there’s the North Dakota Sheriffs and Deputies Associations and the Peace Officers Association. The Chamber of Commerce has come out against us as well, which is interesting because when we had a fundraiser to welcome NORML here weeks ago, numerous businesses in downtown Fargo donated gift cards or items for our silent auction. So perhaps the leadership of the Chamber is against us, but it’s certainly not universal with the rank and file.”

Right now, the coalition’s greatest weapon is misinformation, according to Haymond.

“We’re facing the most ridiculous attacks right now. Some are just laughable. Like, ‘Legalizing marijuana will legalize child neglect’.”Healthy and Productive North Dakota is really pushing the idea that this is bad for children. It’s desperate attacks. Our detractors say, ‘Big Marijuana is coming to take over.’ But here’s the facts: corporate farming is banned in the state of North Dakota. So if Big Marijuana wanted to come in here, they can’t.So we certainly work hard every day to set the record straight.”

And they have faith that North Dakotans will see through the hysterical rhetoric.

“We’re confident that the people of North Dakota – who are sensible people – will see through this maze of misinformation and truly vote their conscience,” Haymond added. “It’s scare tactics. It’s ‘The Sky Is Falling,’ and the sky is not falling, the world will not end come November 7 – the day after we are hopefully successful.”

Right now, the fate of Measure 3 is anyone’s guess. The most recent poll coming from the state suggests that 51 percent of voters support legalization while 36 percent are opposed. That means the 14 percent who are currently undecided could sway the initiative’s outcome either way.

But he has faith that the undecideds will make the best decision come Election Day.

“People in North Dakota are sensible. They’re willing to listen. And our hope is that we’ll be able to continue to put out our message and convey to voters that this is the right and sensible thing to do. It’s states’ rights, personal freedom and criminal justice reform.”

Beyond changing drug policy in North Dakota, Measure 3 could be the tipping point for marijuana reform in America, according to Haymond.

“I think – with no shred of a doubt – that if Measure 3 should pass, it will put pressure on Congress to change federal policy,” he told Civilized. “It’s beyond comprehension for people outside North Dakota that this is even feasible. For a deep red state like North Dakota to vote in favor of this would besignificant, it would force the hand of Congress. And they would have to take a much deeper look at ending prohibition.”

But only time will tell if November 6 is the beginning of the end of federal prohibition in America, or merely the start of the second campaign to legalize recreational cannabis in North Dakota. 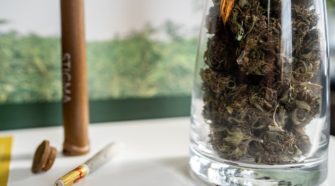