Taryn and Ben Marcus had hoped hemp was going to be the cash crop of their dreams, bringing in enough money so they would no longer have to borrow against their Whitefield farm each spring to tide them over until the strawberry crop was ready to pick.

Instead, their hemp harvest – which garnered national headlines as Maine’s first pick-your-own hemp operation – is turning into a nightmare as the couple’s bank and insurance agency has canceled their accounts, putting the 180-acre farm, farm store and family home at risk.

This even though hemp is not marijuana, cannot get you high and is legal under state and federal law.

“We tiptoed out of the dark woods of prohibition, guided by our elected officials, and wham, we got run over by everyone’s other favorite institutions, banks and insurance companies,” said Taryn Marcus. “We were completely blindsided… what’s the point of legalizing hemp if we can’t actually farm it?”

On Friday, the couple’s bank, Camden National, called to say it was closing the farm’s bank account and calling the $12,000 equipment loan it had just issued for a produce cooler the couple had ordered but has yet to even receive, Marcus said.

This comes on the heels of Acadia Insurance deciding to cancel the policy that covers the 180-acre Uncas Farm, Sheepscot General Store and the couple’s personal home, which is located next door to the former dairy farm. Without insurance, the couple’s privately held mortgage could get called at any time.

Acadia’s parent company, W.R. Berkley of Connecticut, said the insurance company doesn’t comment on individual policies or clients, and refused to answer questions about its current hemp policies. But Taryn Marcus said Acadia has given them until Nov. 19 to find a new carrier before pulling their coverage.

“We thought it was just a mistake, that it would all be fine once we explained we were growing hemp, not marijuana,” Marcus said. “But they understood that. They knew hemp was legal, but said without federal guidelines on how to handle hemp, they had no choice but to cut us loose.”

The couple’s plight attracted the attention of Gov. Janet Mills and Maine Agriculture Commissioner Amanda Beal, who sent a letter to the U.S. Department of Agriculture on Tuesday asking it to finalize federal guidance and regulations for commercial hemp production.

“Growers in Maine are receiving notices of bank account closures and insurance policies not being renewed because of uncertainty around federal hemp regulations,” they wrote. “These are troubling developments that stifle the growth and aspirations of hardworking farm businesses.”

When Congress legalized hemp in December, removing it from the federal government’s list of Class 1 controlled substances like heroin, cocaine and marijuana, it transferred hemp regulation from the U.S. Drug Enforcement Administration to the USDA.

USDA is working on its hemp regulations, which are expected to be published sometime this fall. Once finalized, each state will have to submit their own plan for USDA approval, embrace the federal plan or prohibit hemp production altogether. Maine is waiting for the USDA rules before deciding what to do.

The USDA hopes these guidelines will be in place in time for the 2020 hemp crop, but that leaves all the farmers who jumped into the newly legal 2019 hemp season in limbo, not doing anything illegal, but not able to access many of the support services available to traditional farmers, like banking and insurance.

“We thought we did everything right,” Taryn Marcus said. “We got our license. We researched the best genetics, best growing practices. We transplanted seedlings, weeded nine acres by hand. We publicized the hell out of it to create a market. We basically did what good farmers do. We grew a beautiful crop.”

The couple’s insurance broker is hopeful that she will be able to find them another carrier, but predicts the cost of the policy will be higher than the one they had with Acadia. Ironically, Acadia’s parent, W.R. Berkley, offers coverage to higher risk marijuana operations through one of its other insurance groups.

Several financial institutions have reached out to the couple since they began telling people about their plight, but one credit union that handles marijuana-related deposits isn’t chartered to serve their region and a second institution is so far away that it would require them to hire a courier service to deposit their cash.

Renee Smyth, marketing officer at Camden National, declined to discuss Sheepscot General’s situation, citing customer privacy. But she said that in general, although growing and selling hemp is now legal, banking regulators have offered no guidance on how to ensure they are following the new federal law.

“The conundrum between these small businesses and us, is that we don’t have guidance for how to bank businesses like that,” Smyth said. “We want to work with those businesses. We want to help them grow, but we’re kind of caught in this middle-ground.”

The Marcuses made headlines last month when they announced they would open their first hemp crop to adults for guided public picking, much like they do their strawberry or blueberry fields. Hundreds of people showed up to hand select cuttings for $35 a pound or whole hemp plants for $25 a pound.

The couple decided to start growing hemp – the variety of cannabis that will not get you high – last year after the U.S. legalized its cultivation with the 2018 Farm Bill. In April, they were the first in line to get their state license to plant about 7,000 plants on about 3 acres.

Like all hemp, the plants grown at Sheepscot contain only trace amounts of THC, the psychoactive part of the cannabis plant. The state Department of Agriculture, Conservation and Forestry actually tests all licensed hemp grows to make sure they don’t bust the legal 0.3 percent THC threshold.

The Marcuses bought state-approved seed for four cannabis strains known to yield flowers that will, if dried, cured and heated at the right temperature, yield about 15 to 20 percent CBD, or cannabidiol, the active ingredient in hemp.

The number of hemp licenses issued nationwide has quadrupled since the passage of the Farm Bill last December, according to a report issued last month by New Frontier Data, a national cannabis research company. Licensed cultivation hit almost 480,000 acres in 2019, a 328 percent year-over-year increase.

That is more hemp than the U.S. planted in 1943, at the peak of cultivation during World War II.

Hemp in Maine has grown from a small pilot program in 2016, with just two farmers growing a quarter acre of plants between them, to 164 state licensed farmers from Elliot to Madawaska growing more than 1,700 acres, with another 1,400 acres licensed but not in production, according to state regulators.

Farmers are responding to America’s obsession with all things CBD. According to the Brightfield Group, a national marijuana consulting firm, U.S. consumers spent $591 million on CBD products nationally in 2018 in the belief that it eases insomnia, anxiety, depression and pain.

Hemp is a versatile crop. Its core can be used for construction, its skin for insulation and its nutty seeds for eating. But the CBD craze has made oil extracted from its flowers its most lucrative end market. New Frontier Data estimates 70 percent of the 2019 crop will end up as CBD oil.

Please check your email to confirm and complete your registration.

Use the form below to reset your password. When you’ve submitted your account email, we will send an email with a reset code.

More choices and stable premiums for ‘Obamacare’ next year 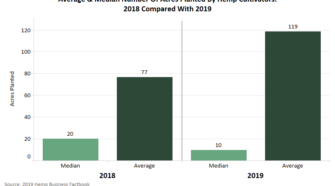