The U.S. Department of Agriculture has approved New Jersey’s plan to allow farmers in the state to begin growing and producing hemp and hemp products. New Jersey, Louisiana and Ohio were the only states given clearance.

“The hemp plant is one of the oldest known plants for commercial use in the world,” Fisher said.

According to a 2018 Congressional Research Service report, there are more than 25,000 reported uses for industrial hemp products around the world. Industrial hemp is grown mainly for fiber production like fabrics and yarns.

Fisher says hemp comes from the same plant as marijuana, cannabis sativa, except hemp does’t contain enough of the psychoactive tetrahydrocannabinol, or THC, to get anyone high.

Fisher says they are hoping processors will come to New Jersey to process hemp oil, because most of the money is in CBD oils.

Hemp is also grown for the production of cannabidol oil, which is extracted from resins produced largely in its flowers and used as a health supplement.

Joe Cutter is the senior news anchor on New Jersey 101.5 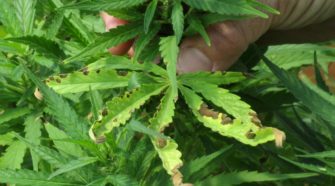