HONESDALE, PA — With it getting harder and harder to turn a profit through traditional types of farming in Wayne County, some farmers are wondering if it’s time to get in on the “hemp boom” that’s been sweeping the country in recent years.Hemp seems to be everywhere these days.

Outdoor-clothing company Patagonia is currently selling a wide range of hemp-based jackets, pants and shirts. Hemp seeds are in the grocery store in the same aisle as flax and chia seeds. Hemp-derived cannabidiol (CBD) oil drops and chews have caught on as alternative treatments for medical issues like anxiety, pain and depression.

There is a hemp alternative for just about any product made from paper, plastic, or fabric, and a hemp niche in the personal hygiene, food and drink markets.

Industrial hemp is of the plant species cannabis sativa. While it looks very similar to marijuana plants, industrial hemp contains no more than .3 percent THC, the psychoactive ingredient in marijuana. Because of its connection to marijuana, growing hemp was long outlawed in the United States until the 2018 Farm Bill, which removed the plant from the list of Schedule 1 drugs. Since then, hemp has become the fastest growing crop in the country.

Now the Penn State Extension of Wayne County is educating local farmers about the opportunities and risks involved in getting in on trend.

Bruce Ludovicy, a hemp farmer from Warwick, NY, spoke to Wayne farmers last week about his experience getting involved with this relatively new sector of agriculture. Ludovicy was a high school chemistry and physics teacher for 27 years who began in agriculture as a flower farmer, growing for farmers’ markets and weddings. Ludovicy said that for hemp-growers in this region, the money is in CBD production.

“You can grow grain and fiber, but the problem is we don’t have the infrastructure to utilize them,” he said, noting that he knows of some places in Binghamton and Rochester that will purchase fiber, but not at a price that makes it worthwhile for the growers.

This year it took Ludovicy three we`eks working with his family and several laborers to harvest and dry about 5,000 hemp plants. He is currently working on finding a way to complete the process more efficiently, looking to farmers out West who have been able to produce much more hemp at a much faster pace.

In the meantime, because it’s such a time-, labor- and energy-intensive crop to produce, Ludovicy recommended that Wayne farmers start small with between one and three acres. Even at that scale, hemp is a risky endeavor.

“Hemp is not a get-rich-quick scheme,” the crop could be as much as a $5,000 investment. Ludovicy called the hemp market the “Wild West” because it can be so unpredictable. “Last year I sold my material for $60 a pound, right now that same material would probably sell for $16 a pound.”

Krystal Snyder of the Penn State Extension also spoke with the farmers about the legality of growing hemp. Many of the regulatory issues involved are still in flux, she said, as a result of legalization happening so recently. Since the federal government removed hemp from the Schedule 1 list, it’s been up to states to regulate its farmers’ hemp farming.

Snyder closed her presentation with some questions she said are important for farmers to consider if they plan on getting into the hemp market. Chief among them: “How does PA ensure a niche when surrounding states are already investing in hemp infrastructure?” and “Will the CBD market continue, or will the bubble burst?”

If you are a farmer in the Upper Delaware Region that grows hemp, The River Reporter wants to hear from you. Call 845/252-7414 or email owen@riverreporter.com to tell us your story 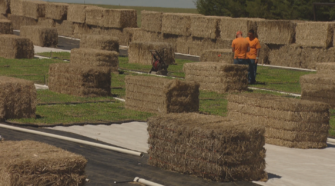