DANVILLE, Va. (WFXR) — Josh Ludgate, co-owner of Natural Bridge Farm, plans to open a plant in South Boston this summer that will process his hemp into CBD oil.

“What we’re trying to accomplish here is put Virginia on the map for being a leader in cultivating this plan,” he said.

He expects to bring about 30 jobs to Southside, thanks to Virginia’s newest cash crop.

“It’s between five and up to 20 times what they would typically make on an acre of, from soybean to corn to tobacco.”

With hemp now legal to grow in Virginia, the Commonwealth is seeing the industry as a growing market, especially as other crops like tobacco are on the decline.

In Danville on Tuesday, Ludgate was one of more than 100 hemp industry workers who attended an expo hosted by the Institute for Advanced Learning and Research. It was the first in what the Institutes plans to be a yearly event to bring together hemp growers and processors.

For many, the goal was to build contacts and help support each other in the new and volatile market.

Rebecca Hobden is the CEO of East Coatst Cannalytics, a hemp testing lab. She says she has seen hundreds of farmers sign up to be licensed to grow hemp.

“Especially in that Southside Virginia area,” she said, “to the border right around Danville where we are now, people getting back on their land and starting to plant things that have a high value.”

But those benefits aren’t being seen in Southside just yet. Many at the expo say the market last year was flooded with hemp, but the demand didn’t keep up.

“Yeah we ran into issues with our harvest,” said Mike Brennan with Horizon Hemp and Agriculture, “as far as market price drop, but anything new coming in is going to do that, it’s going to fluctuate. So we’re going to stick it in there.”

From oils to dog treats, these growers see a big potential market for their products, if consumers learn more about what is available.

“With the consumer education,” said Derek Wall with Buffalo Hemp Company, “with more research being done on the plant and what its benefits are, I think the more that this industry will grow and it will stabilize and then the growers will make the money that they expect.” 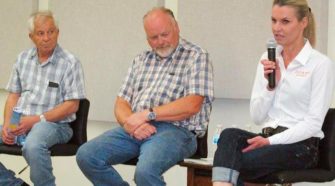