Barranquilla, Colombia, Dec. 05, 2019 (GLOBE NEWSWIRE) — View Systems, Inc.’s (VSYM), medical marijuana and hemp subsidiary, Sannabis S.A.S. (“the Company”) announces they will begin to import Hemp seeds and other Hemp derived products to the United States from South America beginning next quarter. The Company is manufacturing products in Colombia derived from certified hemp seeds and has begun planting hemp fields in Uruguay to export hemp seeds to the United States. The Company has secured one of the few licenses in Uruguay for hemp cultivation, they will apply for a transformation license in the first quarter of next year. Sannabis products in Colombia are registered with Colombia’s Health Authority, INVIMA.

This past April, the U.S. Department of Agriculture (“USDA”) released a statement, in which the agency clarified that the passage of the 2018 Farm Bill rendered the importation of hemp seeds legal. The Farm Bill legalized hemp, hemp seeds, and other derivatives, by removing them from the Controlled Substance Act. Accordingly, the USDA held that the DEA “no longer has authority to require hemp seed permits for import purposes.”

Although the 2018 Farm Bill legalized the commercialization of hemp and its derivatives, the production of the crop in the U.S. has yet to be regulated by the U.S. Department of Agriculture (“USDA”), which is tasked with adopting rules that will serve as a road map for states and Indian tribes wishing to regulate hemp within their borders. Sannabis takes this as an opportunity to open the door to new markets with legally imported hemp products from South America since hemp has not yet been regulated by the USDA to be grown in the U.S.

The USDA had anticipated issuing its rules by the end of summer; however, the agency only recently submitted (on September 13) its proposed rules to the White House Office of Budget and Management (“OBM”), which reviews all regulations adopted and implemented by a presidential administration. Until this process is complete, there is little guidance on the production of hemp, including its transportation. The Company believes this is a benefit for hemp importers.

Until the USDA passes clear regulations on hemp production in the U.S., many major U.S. corporations will be hesitant to initiate the sale of hemp derived products using hemp grown in the United States. The Company is establishing commercial relationships with U.S. corporations for the importation and distribution of hemp seeds and other hemp derived products from Colombia and Uruguay. Interested U.S. distributors are encouraged to contact the Company.

View Systems, Inc. also announces they anticipate filing their quarterly report for Q3 with the SEC today or tomorrow.

View Systems Inc. provides security and surveillance products to law enforcement facilities such as correctional institutions as well as to government agencies, schools, courthouses, event and sports venues, the military and commercial businesses. View Systems’ products are used by commercial businesses and residential consumers wishing to monitor their assets and limit their liability. For more information, visit www.viewsystems.com

View Systems Inc. (www.viewsystems.com) is the developer of the ViewScan Weapons Detection System, a Department of Homeland Security (DHS) sanctioned product used by law enforcement and correctional facilities, government agencies, schools, courthouses, special events, sports venues, military, and commercial businesses. View Systems acquired Colombian Cannabis company, Sannabis, to diversify into the burgeoning Cannabis industry with new management committed to continue developing their ViewScan Weapons Detection System in Colombia for the local and international market. View Systems intends to file for a name and symbol change in the near future, however, they will continue to develop their newly enhanced state of the art ViewScan products in Barranquilla, Colombia for the local and international markets.

ViewScan is installed at government agencies in Washington, DC and elsewhere, major school systems, correctional facilities, ports, and police stations around the world. View Scan has also been used at events where top security clearance is required for former Presidents. In this Market Survey Report commissioned by the U.S. Department of Homeland Security (DHS), ViewScan demonstrated more features than their top competitors, https://www.dhs.gov/sites/default/files/publications/WTMD-MSR_0614-508.pdf

Next Relevium launches organic hemp products in US - NutraIngredients-usa.com

Cream of the crops – Mail Tribune 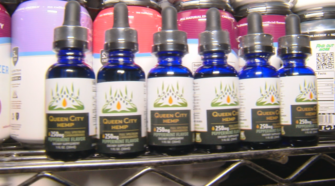