TORRINGTON – While hemp advocates are quick to point out that the cannabis sativa cultivar can be used for thousands of products ranging from building materials to clothing and even health supplements, there are some risks and drawbacks to investing big dollars in the burgeoning hemp industry.

Those drawbacks are both due to environmental issues with growing the plant itself, as well as an oversaturated and immature market for the raw product.

It’s a risk versus reward scenario, according to University of Wyoming Extension Educator Carrie Eberle.

Eberle told the handful of agricultural producers who braved a harsh winter storm to attend the High Plains Crop Conference on Nov. 26 that the best thing local farmers can do if they plan to grow hemp in Goshen County is have a solid contract in-hand before making a major investment.

“I would say for a farmer who is interested in growing it – and I don’t do farm contracts, I’m not going to pretend to do them – but be sure you feel good about that contract and know you are covered for everything, that you get cash on harvest, not on delivery,” she said.

There are three kinds of hemp, Eberle said, and each of them presents its own set of challenges to agricultural producers. If a producer would want to get into the hemp business, it would be a choice between hemp for fiber, hemp for grain or hemp grown for cannabinol, which is an oil used for health supplements. No matter which market a producer is trying to break in to, there are some common issues.

While hemp is touted as drought-tolerant, Eberle said that isn’t necessarily the case.

“This crop needs water to establish,” she said. “If you don’t get water on it when you plant it, you can get like 2% establishment. We’re also looking at an early June planting date. In terms of looking at it like it’s going to be a successful dryland crop, there are potentially going to be establishment issues. As we learn more, that may change – but right now, it’s going to be pretty vulnerable to get it to grow in a dryland situation.”

Regardless of the intended market for the hemp, Eberle said buying the right seed is crucial.

“It’s really critical, and it’s not all the same,” she said. “If you want a grain crop, choose a grain variety.”

Of the potential markets for hemp, Eberle said seed hemp, which is used in food products for people and animals, may be the most viable in Goshen County.

“This is a potential market if you can contract out and find markets for those seeds,” she said. “You can go to Main Street Market right now and find hemp hearts, which is what they call it. Money-wise, income-wise, large-scale production-wise, this is probably the best option for a field crop for us.”

Eberle said the seed crop could run into issues with cross-pollination and seed contamination. Hemp seeds are dioecious, which means they are male or female – and that comes into play in this type of hemp.

“For this, you need a bunch of female plants to set seed for you, and just a few male plants in the field to pollinate them,” she said. “If you have 50 percent males, you’re going to be greatly reducing your yield for that crop.”

Eberle said it’s possible to find the proper ratio by buying the proper seed, or by manually thinning the fields.

“That is a lot of labor and work,” she said.

One of the big risks of the seed crop, Eberle said, is the toll it takes on farming implements.

“One of the things I would stress is to have a fire extinguisher,” she said. “You will start your equipment on fire during harvest. One guy said that with seven minutes, their combine was on fire in one of their fields because it is still hemp – the fibers in the stem get in all of your bearings and they start to cause friction and they start on fire. It can be really hard on your equipment.”

“He also said that after harvest, you need to wash your equipment with industrial solvents. That residue is so sticky on there that it bogs down everything,” she said.

“Field production of CBD in Goshen County is stupid,” Eberle said. “How many hail storms did we have this year? Right now, the amount of value you’re putting into putting a CBD crop into the ground in our climate conditions and our weather hazards, you’re just asking for a disaster.”

“I consider it a specialty crop because it is really high input,” she said. “You can get seeds to plant for a CBD crop, but the primary way to produce CBD crops is through clonal propagation.”

And that means the plants will have to be transplanted into the fields.

“The problem is that clones mean transplanting. Now, there is some amazing transplanting equipment out there, but it’s not cheap. Right now, your transplant equipment is going to be hired labor force,” said Eberle.

“Right now, we’re looking at a hand-harvest,” Eberle said. “There are ways to mechanically harvest flower buds, but again, that costs money. There is equipment out there and there is equipment developed, but for somebody just getting started, that’s probably not reasonable. You’re looking at having a labor force in your field, picking those flower buds, needing a place to dry them and needing a place to ship them for extraction. There’s a lot of infrastructure and planning required for a CBD crop.”

While hemp for CBD might not be realistic in area fields, Eberle said it can be done indoors.

“In Scottsbluff, that huge greenhouse that went out of business, that could be a great place to try and establish CBD production, or work on clonal propagates,” she said.

While hemp grown for fiber is the cheapest and likely the most viable to grow in the Wyo-Braska area, that’s the case in other areas, as well. Because of that, there is a market glut leaving acres of hemp with no buyer.

“Don’t grow fiber crop,” Eberle said. “They can’t give it away in other areas that have it. If industries want to come in, awesome. But for right now, fiber is not going to be what you want to grow. That is too bad because it’s going to be the cheapest and easiest.”

Fiber hemp is tough on equipment, and harvesting it is labor-intensive, as well. Eberle said it requires a process called field retting, where the crop has to be cut and left to sit in the field so it begins to naturally break down.

“It is really hard on equipment, and there is no market for it right now,” she said. “Basically, you cut that crop and you let it sit in your field with moisture on it. It starts to break down the fibers in the stem. It’s a pre-conditioning process done in the field. As far as understanding fiber production, it’s kind of like a guy buying an alfalfa pivot and thinking he is going to produce premium quality alfalfa his first year of hay. There’s going to be a learning curve.”

The market glut has cost farmers in other areas thousands as entire hemp harvests have no buyers. According to a study conducted earlier this year by Whitney Economics, farmers across the land jumped into the hemp industry once it was legalized by the 2018 Farm Bill – but perhaps it was premature.

According to the study, 65 percent of hemp farmers nationwide do not have a buyer for their crops.

“This supports the hypothesis that farmers entered the market before the infrastructure was in place,” the study said. “By extrapolating this to all of the states surveyed, only $2.8 billion of the $9 billion in biomass potential had a buyer.”

The issue, according to the study, is that there is no infrastructure to support the crop. As of now, there is only one processor for every 100 acres of hemp produced nationwide.

The Whitney study predicts that by the time the infrastructure for hemp processing is in place, large corporate operations will have taken over the business.

“Big agriculture will enter, pushing smaller growers to the side,” the study said. “Given the revenue per acre and the value of hemp as a rotational crop, smaller firms must be prepared to compete with larger commercial operations. Small growers will still find an opportunity, but they will be fewer and more focused, or niche markets.”

But the market will be there at some point, the Whitney study said.

Whitney predicts that in time, hemp will be the fourth major crop in the United States. It has the potential to even be the third-biggest cash crop behind corn and soy, and could be an $11 billion a year industry if it all fleshes out. The study said the supply chain issues could work themselves out in the next year or so, and are pretty typical of new industries.

“There are a lot of issues related to the 2019 ramping up of hemp industry post passage of the 2018 Farm Bill,” the study said. “While these can create hardships for farmers and businesses alike, they are not atypical of a newly formed industry. What is atypical is how quickly people jumped into the market, the pace of growth and how this accelerated growth exponentially magnified the impact on the industry.

“Now that the season is near its end and all of the warts have been exposed, the industry and its supply chain will adjust and normalize over the next 12 – 18 months and once again as more regulatory structures are put into place,” according to the study.

Eberle said that hemp was a thriving commodity market before World War II, but regulations due to another cannabis sativa cultivar, marijuana, destroyed the market.

“What is really interesting is the before World War II, hemp was a major industry in the U.S.,” she said. “It became a drug, it became illegal to grow it and all of the industry infrastructure disappeared. We can build it back, but we need investors and need people who want to do that. And while that infrastructure is being rebuilt, it might be best for local farmers to avoid the hemp hype train for the time being.

“Right now, if a farmer doesn’t know where he’s going with that product, I would not recommend them to take the risk of growing it – and that is with any new crop,” Eberle said. “If you don’t know where it’s going, don’t grow it.

It’s not something that should be abandoned and forgotten locally – but Eberle said producers should definitely consider all of the factors before getting into the hemp business.

“There are upsides and there is potential,” she said. “I don’t think hemp is a ‘let’s never talk about it again,’ It is a ‘proceed with caution, be smart and let’s do it right’ situation, so farmers don’t get burnt by enthusiasm from the opposite side of the industry.

“I don’t want guys growing something and investing a lot in these upfront costs, and not being able to move that product because we overhyped the industry,” she said.

What the Dutch can teach the world about cannabis 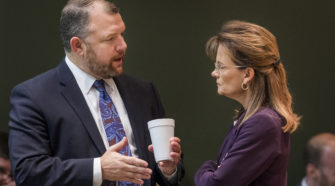