A bipartisan coalition of 34 state and territory attorneys general are urging Congress to pass coronavirus relief legislation that includes language protecting banks that service marijuana businesses from being penalized by federal regulators.

The case they lay out runs directly counter to seemingly coordinated statements by GOP lawmakers in opposition to the banking provision’s inclusion in legislation the Democratic-led House passed on Friday.

In a letter to House and Senate leadership on Tuesday, the top state law enforcement officials said there are three main reasons that providing the cannabis industry with banking access is especially necessary during the pandemic.

First, the public safety threat of operating on a largely cash-only basis has been exacerbated amid the crisis. Second, large cash transactions “places law enforcement, tax regulators, consumers, and patients at heightened risk of exposure to the virus.” Third, access to financial institutions would make it easier to collect tax revenue from marijuana sales, which is particularly needed to offset economic shortfalls due to the health crisis.

Congress needs to pass #SAFEBankingAct, led by @RepPerlmutter. Particularly during #COVID19, it is irresponsible to force #cannabis businesses to operate in cash. We @COAttnyGeneral led a bipartisan AG coalition to demand action. https://t.co/o5JR3UXO92

“The current predicament of a rapidly expanding national marketplace without access to the national banking systems has resulted in an untenable situation,” the officials wrote. “We stress that current legislative models are available to fix this situation.”

The argument from the attorneys general, which includes seven Republicans, flies in the face of criticism from GOP lawmakers, who have stated that the banking language included in House leadership’s latest COVID-19 package is not germane and is simply part of a liberal wish list.

The letter goes on to say that passing the Secure and Fair Enforcement (SAFE) Banking Act as part of coronavirus relief legislation would not represent an endorsement of cannabis legalization by Congress. “Rather, it reflects a recognition of the realities on the ground and an embrace of our federalist system of government that is flexible enough to accommodate divergent state approaches,” they said.

“Many legitimate businesses have been pushed into cash-dependent models because they don’t have access to the federal banking system. At a time when COVID-19 has exacerbated health and safety concerns related to cash exchanges, now more than ever it is vital Congress act on this point,” Weiser said in a press release. “We in Colorado will continue to be at the forefront of defending our businesses and their employees.”

California Attorney General Xavier Becerra said that the “continued exclusion of the licensed cannabis industry from the federal banking system is untenable—and unwise.”

Congress should move swiftly to pass this commonsense legislation and provide relief to the many local cannabis businesses who are playing by the rules. https://t.co/IK1eJYL1kB

“The coronavirus crisis has only exacerbated the economic and investigatory challenges that arise from keeping a $15 billion industry in the shadows,” he said. “Congress should move swiftly to pass this commonsense legislation and provide relief to the many local cannabis businesses that are playing by the rules.”

Last year, I led a group of 38 AGs in support of the #SAFEBankingAct, which ultimately passed the House.

This bill will deter criminal activity, protect the health of our residents, and make our communities safer: https://t.co/iv0ZyYDiGp

Advocates, stakeholders and lawmakers have been pushing for some form of cannabis reform to be inserted into COVID-19 legislation. The inclusion of the SAFE Banking Act, which was previously passed by the House as a standalone bill on a bipartisan basis last year, represents a significant victory to that end.

That said, it is unclear how the issue will fare in the Senate, whether as part of the COVID-19 response or otherwise.

Rep. Ed Perlmutter (D-CO), the lead sponsor of the bill in the House, made an argument in favor of the provision’s inclusion that’s similar to one point that attorneys general made.

Thank you to @COAttnyGeneral and others for your leadership on this issue. The #SAFEBankingAct is important for the cannabis industry and its workers who were also deemed essential during the #COVID19 crisis even as they face an increased public safety and public health risk. https://t.co/cqXcR1ezge

He said that while some Republican legislators might argue that the cannabis language doesn’t belong in a coronavirus bill, the measure would actually protect public health by reducing the threat of spreading the virus through cash transactions.

After the House passed the SAFE Banking Act last year, it’s since sat in limbo in the Senate Banking Committee. Negotiations over the bill have been ongoing, with the Chairman Mike Crapo (R-ID) recommending a series of changes, but Sen. Cory Gardner (R-CO) saying a deal was “close.”

Advocates have also been asking lawmakers to add language extending access to federal Small Business Administration (SBA) relief programs to cannabis businesses in coronavirus legislation. That didn’t materialize in this package, however.

Currently, SBA specifically prevents marijuana businesses from receiving COVID-related relief due to federal prohibition. That also includes companies that work indirectly with the industry, such as accounting and legal firms.

Rep. Earl Blumenauer (D-OR) introduced a bill last month that would fix that, calling for SBA access for cannabis businesses and ancillary companies. That came after he led a letter with 34 bipartisan members of the House urging leadership to include the policy change in future coronavirus-related bills.

Sens. Jacky Rosen (D-NV) and Ron Wyden (D-OR) made a similar request to Senate leaders in a separate letter.

Read the cannabis bankin letter from the attorneys general below:

SAFE Banking Act With Signa… by Marijuana Moment on Scribd 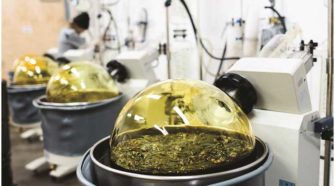