One year ago on Thursday, activists behind a first-of-its-kind drug policy reform ballot initiative in Denver were anxiously awaiting the results of a local vote that stood to set the city apart from any other in the country. Things didn’t look promising near the end of the night when they were behind—but as the votes continued to trickle in through the next day, it became official: The city had become the first place in the U.S. to decriminalize so-called magic mushrooms.

The Decriminalize Denver campaign defied odds and expectations. Psilocybin was just entering into the mainstream lexicon, there weren’t any large and monied psychedelics advocacy groups chipping in and voter confusion about what it meant to decriminalize—rather than allow retail sales like is the case for marijuana—threatened to derail the bold initiative.

But through a combination of education, outreach and innovation—as well as the open-mindedness of the local electorate—the campaign prevailed. More remarkable than the policy change in Denver, however, is the national grassroots movement it has inspired in the year since the historic vote.

Activists in more than 100 cities across the U.S. have now expressed interest in reforming their own psychedelics policies. Two more cities—Oakland and Santa Cruz—went a step further than Denver and decriminalized a wide range of entheogenic substances such as ayahuasca and ibogaine.

Oregon advocates are close to qualifying a statewide ballot initiative to legalize psilocybin for therapeutic use for this November. Washington D.C. activists were approved to circulate a petition to decriminalize various psychedelics in the nation’s capital on Wednesday. A California campaign had hopes of putting psilocybin legalization on the ballot before the coronavirus pandemic. And psychedelics reform bills have been introduced in three state legislatures.

On the congressional level, Rep. Earl Blumenauer (D-OR) has endorsed the Oregon psilocybin initiative and Rep. Alexandria Ocasio-Cortez (D-NY) introduced an amendment to encourage research into the medical potential of psychedelics. That was defeated on the House floor, but she plans to file more legislation on the issue.

In other words, a lot has happened in a year. And it is difficult to believe that the movement for drug policy reform beyond cannabis would have organized and spread this quickly were it not for what happened in Denver. Kevin Matthews, who led that campaign and has since launched a national advocacy group called SPORE, told Marijuana Moment that he “always looked at Decriminalize Denver and the Denver Psilocybin Initiative as an experiment for how to change laws around psychedelics.”

“Denver was the first step and we still have a lot of work to do,” he said. “What I didn’t necessarily expect was how quickly the landscape would evolve and how it would be this massive, national—perhaps even global—conversation now.”

The success of the campaign “just shocked people,” he said. “I think it really showed that you have a committed, passionate group of people who are brave enough to step into this space and really put their blood, sweat and tears, energy and, in some ways, livelihoods on the line to progress something. We were another example of that, right?”

More and more examples have formed in the past year, with activists working overtime to convince local legislators and residents that criminalizing people for using entheogenic substances is the wrong path. Instead, the plants and fungi should be viewed through the lens of civil liberties and public health, they say, citing research indicating that these currently illicit drugs hold significant therapeutic potential for the treatment of conditions such as severe depression and post-traumatic stress disorder.

One of the main reform groups that has emerged in the space since Denver is called Decriminalize Nature (DN)—a national hub for campaigns to lean on as they pursue local and state policy changes. Chapters across the country are raising awareness, exploring the ballot process for reform and communicating with lawmakers about the need to take a new approach to psychedelics.

Larry Norris, who cofounded Decriminalize Nature, told Marijuana Moment that “Denver’s success cast light on a space beyond the veil of possibilities.”

“They were the first to bring the important conversation about decriminalization to the table, and in the end, the power of the people prevailed. Even the victory was a great underdog story,” he said. “To come back from behind, after almost every news organization reported the initiative had failed the previous evening, provided great media attention for the larger policy conversation. Their success also gave a boost of confidence to Decriminalize Nature, who was able to share Denver’s victory with the Oakland City Council-Members shortly before the public hearings began in Oakland.”

Oakland activists aren’t stopping at decriminalization, either, with plans now in the works to propose a local regulatory model for a limited retail system for entheogenic substances.

David Bronner, CEO of the activist soap company Dr. Bronner’s, which is funding several psychedelics reform campaigns across the country, told Marijuana Moment that the vote in Denver last year “showed that it’s now politically possible to win our right to life-saving psychedelic medicine at this moment of the cultural psychedelic renaissance, and directly paved the way for Decrim Oakland to make magic happen there, and the birth of now national and international Decrim Nature movement.”

“It set a good precedent of talking about psychedelic medicine in the healing therapeutic frame, with a strong educational component about proper preparation, set and setting, and integration after,” he said.

There have been some reform supporters who have questioned whether decriminalization campaigns could detract from the rigorous, federally authorized studies into the therapeutic benefits of psychedelics that are in the works. Author Michael Pollan, for example argued in a New York Times op-ed shortly after the Denver vote that “ballot initiatives may not be the smartest way” to change laws around the substances. He later seemed to walk back that stance somewhat after pushback from advocates, however.

Natalie Ginsberg, director of policy and advocacy at the Multidisciplinary Association for Psychedelic Studies (MAPS), which is funding and gaining approval for clinical trials into several substances, told Marijuana Moment that for decades, “psychedelic research has been paving the way for psychedelic medicine, but medical access is not enough—decriminalization must go hand-in-hand with medicalization for a healthful society.”

Bronner also contended in a blog post last year that bringing the underground psychedelics world aboveground through a state-licensed treatment model in advance of federal approval “provides an example outside of the traditional pharma model for responsible regulated adult access to psilocybin therapy.”

“It’s also important to understand that the state ballot measure process is the only political mechanism that exists for providing this kind of broad responsible adult access,” whereas psychedelic-based pharmaceuticals could be less accessible, he said.

Advancements are being made in the traditional research realm as well, with Johns Hopkins University announcing last year that it is launching the nation’s first center devoted exclusively to studying psychedelic drugs.

What’s to come in the year ahead? The current pandemic might have created challenges for political campaigns of late, but assuming society returns to some level of normalcy, advocates anticipate an even bigger wave of reform—another year of progress that challenges the status quo of prohibition and demonstrates the need for a psychedelics renaissance.

Bronner predicted that “we’re going to see most large urban cities in America decriminalize mushrooms and plant medicines in the next few years,” adding that he believes Food and Drug Administration approval of psychedelic therapies will happen and Oregon will legalize psilocybin for therapeutic use. That will “pave the way to mainstream acceptance and widespread psychedelic healing of the people of the world by the end of the decade,” he said.

Norris conceded that it’s “uncertain how quickly things will reopen post COVID-19 shutdown and when city councils will be able to address these policies again” and the pandemic “obviously had a great impact on those with ballot initiatives who need to gather signatures.”

“However, many DN teams are working hard behind the scenes to prepare for the eventual reopening. Taking our cue from nature, DN is currently in a phase of nourishing our roots, rather than fruiting and blossoming,” he said, adding that the organization has been holding virtual meetings with activists across the country and globe. “Assuming things resume in a timely manner, we project at least five to seven more cities will Decriminalize Nature by the end of 2020.”

Among some drug policy reform advocates, there’s a lingering question about focusing decriminalization efforts on a singular class of substances, rather than ending the drug war altogether by removing criminal penalties for all currently illicit drugs.

Matthews said he agrees that reform shouldn’t end with psychedelics. “I absolutely support the broader decriminalization of all drugs,” he said. “Our campaign in many ways opened the door for us to have a direct conversation with the city—a very direct conversation with the city—about how it enforces their drug policy. We need alternatives to the current drug policy paradigm.”

“All substances absolutely need to be decriminalized because they’re mostly non-violent and victimless crimes, and we need to focus more on treatment where it’s necessary,” he said. “The psychedelics drug policy movement can very much inform and help galvanize the broader drug policy decriminalization movement. Denver is a good example of that based on the messaging we’ve got from the city.”

Ginsberg at MAPS said that “Denver’s move to deprioritize psilocybin arrests ignited communities across the country to mobilize to deprioritize all entheogenic plants, cacti and fungi, or ‘decriminalize nature’,” adding that she’s “hopeful that these psychedelic movements will join forces with broader coalitions to end the war on drugs and fully decriminalize all drugs.”

“In times of pandemic it’s clearer than ever that mass incarceration, and mass criminalization, are fundamentally incompatible with public health,” she said.

Broader decriminalization campaigns might not yet be taking off at the speed of the psychedelics reform movement, but there are proposed statewide initiatives in Oregon and Washington state to fully end the criminalization of drug possession while expanding treatment services.

In the meantime, Matthews had this to say to activists in the early stages of exploring psychedelics reform:

“Be committed, and that takes discipline. Folks definitely need to explore—both internally, to have experience with these substances to really understand it, and then find the others. That takes bravery because you’re stepping out as a psychedelics user in a sense. Then start broadcasting. Start sharing information. Social media, email your network—broadcast, broadcast, broadcast, and do it with integrity. Be very open about both the therapeutic and medical potential and the risks. That’s very important.”

“If you’re committed, a part of that involves faith and trust in the process,” he said. “This movement certainly has a mind of its own. If anyone out there wants to dedicate their livelihood to this, then they will be supported by the microverse.”

Decriminalization might be on the books now as Denver’s official policy thanks to the vote one year ago, but Matthews and other advocates are still at work educating city officials and ensuring that the change is implemented effectively, with an eye toward justice. A panel comprised of city officials, law enforcement and advocates, which was mandated by the ballot measure, held its third meeting on Wednesday—two months after the group established tracking and reporting criteria for police activity related to psilocybin post-decriminalization.

Now, thanks to Denver voters’ decision last May, the city is home to the nation’s first government psychedelics decriminalization body, but it is not likely to be the last.

Campaign To Decriminalize Psychedelics In DC Cleared For Signature Gathering

Next USDA approves hemp plan for Massachusetts - The Boston Globe 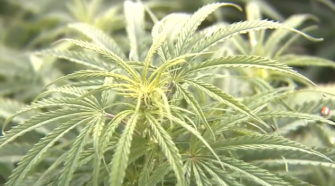