The Joint Appropriations Committee, which oversees the state budget, heard $245,000 or $3.5 million for cost estimates from the Legislative Research Council and state agencies, respectively, to implement a hemp program, lawmakers heard on March 3.

Bill sponsor Rep. Lee Qualm, R-Platte, said meetings with the Governor’s Office are ongoing and he believes they’ll be able to negotiate a budget that is agreeable to both sides.

To get a hemp program up and running, state agencies told the committee that it’ll take 15 additional staff and $3.5 million in one-time and ongoing costs, of which $1 million would fall to the state to pay.

But legislators’ research department, the Legislative Research Council, told the committee that it’ll take 1.6 additional staff and $245,000 in one-time and ongoing costs, of which $164,000 would come from the state coffers. The LRC’s estimate differs from the state because it asserts that the state won’t need testing and lab space or additional staff, based on what occurred in North Dakota and Montana when they began their hemp programs.

Providing adequate funding for a hemp program is one of Gov. Kristi Noem’s four “guardrails” that need to be in place before she’ll consider signing House Bill 1008 legalizing industrial hemp this session. Her Cabinet told the committee on March 3 that the LRC’s estimate won’t fulfill Noem’s guardrail requirement.

Qualm said that at this point, he’s not concerned that Noem will veto the hemp bill for a second consecutive year.

Qualm said the state’s cost estimate includes new lab space and equipment that won’t be needed in the first year of the program. If the bill passes, the state needs to submit its hemp plan to the U.S. Department of Agriculture, which has up to 60 days to approve it. State officials and Qualm said it could likely be late in the planting season before farmers can legally plant it.

“I don’t see a lot of acres being planted this first year. I think one (staff) person will very much be able to take care of it,” Qualm said.

Additionally, the state has two questions on the November ballot related to hemp and marijuana that would completely change what the state has to do and it wouldn’t make sense to add staff and equipment this year, Qualm said.

In both scenarios, the license and inspection fees would cover part of the cost. State officials said they would revisit the amount of general funds needed with legislators each year as fee revenue increases because of an increase in producers growing hemp.

But how many producers and processors will apply for state hemp licenses during the first year was a guess on March 3.

Rep. Taffy Howard, R-Rapid City, questioned why the state couldn’t start out with one staff to oversee the Department of Agriculture’s hemp program. The department’s financial officer Chris Peterson replied that they don’t want to be stuck in a position where they’re underfunded and understaffed without any capacity in the department’s budget for additional resources.

The committee questioned state department heads’ estimated need for 13 more staff in the departments of Health and Public Safety, new equipment and renovations to the state’s public health lab and drug storage lockers if the state legalizes industrial hemp program.

The sticking point for the legislators was that industrial hemp is federally legal and the state has to implement ways to handle it already, regardless of whether state legalizes it.

Public Safety Secretary Craig Price said his budget could absorb the costs if it’s not legalized. But if the state legalizes hemp, it’ll increase the amount of hemp in the state and he’ll need more resources to handle it, he said.

When questioned about how quickly he can have staff in place to handle industrial hemp, he said he’ll likely move four current staff into the four additional trooper staff positions in the state’s cost estimate. But he needs inspectors, field tests and storage space to handle the increase in volume if it’s legalized, he said.

Sen. John Lake, R-Gettysburg, questioned if law enforcement is going to be testing hemp loads being transported that have already been permitted by the state and tested by the state Department of Agriculture. Price said he doesn’t know if they’ll test every load they come across, but there may be reasons for law enforcement to be suspicious that will lead to the load being tested.

Health Secretary Kim Malsam-Rysdon said that any plant containing THC, the chemical responsible for the high, would continue to be illegal in South Dakota if HB 1008 doesn’t pass. The state currently doesn’t have the ability to test a plant’s THC level to determine if it’s hemp or marijuana. When driver’s claim their load is hemp, those tests are sent out of state, and that would continue if the state doesn’t legalize industrial hemp, she said.

“We would not build state capacity to test for laws that don’t apply to South Dakota,” she said.

If industrial hemp is legalized, law enforcement wants the testing to be done in-state because they’re concerned an out-of-state lab test will impact their cases, Malsam-Rysdon said.

The state public health lab is funded by fees law enforcement agencies pay for the state to test forensic evidence. The testing and storage space is at capacity, Malsam-Rysdon said. If the state legalizes industrial hemp, it’ll need a $275,000 renovation at the facility to handle the increased volume, she said. The lab is anticipating an increase of 1,500 samples per year to test to determine if it’s hemp or marijuana, she said.

The state will also need $430,700 worth of equipment to be able to test a plant’s THC level to determine whether it’s hemp or marijuana for law enforcement, Malsam-Rysdon said.

Rep. Lance Koth, R-Mitchell, questioned if it was fair to put the entire renovation cost in the hemp program when it needs to be done anyway.

Joan Adam, director of the Health department’s administration division, responded that the renovation has been a “wish list” item for the last several years and they haven’t completed it because they don’t have enough money from fee revenue to pay for it. But if industrial hemp is legalized, the renovation would need to be done immediately, Adam said. 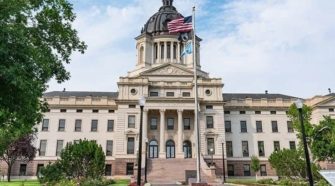