East Hampton real estate magnate Stefan Soloviev, owner of Crossroads Agriculture, began buying property on the North Fork in 2013 and has since reportedly acquired over 1,000 acres of farmland. Some of that land is poised to be the site of a hemp operation.

Four years ago, he purchased 27 acres of farmland in Orient and two years later, he purchased more than 300 additional acres across the North Fork.

Mr. Soloviev’s interest in the multi-billion-dollar hemp industry speaks to a larger discussion on the legality of cannabis varieties, consumer demand and the proliferation of hemp farms on the East End and nationally.

In a letter to The Suffolk Times last month, he addressed speculation about his land buys, setting aside any large-scale development plans and saying instead that his focus would be on hemp production.

As of Dec. 12, three farms on Route 25 in Jamesport donned black and blue “Soloviev” signs. In a phone interview Dec. 11 he confirmed those purchases and a 90-acre farm on Sound Avenue in Baiting Hollow, but declined to say what he will grow there.

“I’m not talking about what I’m farming. I don’t do that out west and I’m not going to start to do that back east,” he said.

Mr. Soloviev said he is not looking to buy anymore property here.

“I’ve hit my limit on the North Fork and I’m back out west right now as I speak, running my business, the important part of my business … This is where I exist, and this is where this company exists. I’m really tired of talking about the North Fork. It’s not my priority.” 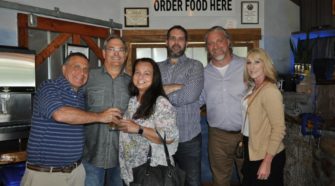