Canopy Growth (CGC) has been called the best in class, as far as Canadian cannabis players are concerned. That firm, having benefited from the hefty investment made by U.S. alcoholic beverage maker Constellation Brands (STZ) , will report on Wednesday morning. Aurora Cannabis (ACB) has been called the best risk averse option due to it’s low market price, and that firm did report year over year revenue growth of 259%. Both of these names are locally domiciled at the New York Stock Exchange. There is another such name that enters nearly every cannabis-based conversation. That would be the Wild Child. That would be Tilray (TLRY) , listed over at the Nasdaq.

Cannabis stocks were for the most part, pretty darned hot over the two months leading into federal legalization across Canada for recreational use. The groups largely sold off after the fact. That was broadly expected as share prices had run ahead of reality, and that is also exactly how markets behaved in response to California’s state level legalization way back toward the start of the year. The fact that stores that sell cannabis in Canada for recreational use have regularly, or it just seems like they have (I am not in Canada), run out of product. This leaves growers/producers in the position of prioritizing the medical use side of what they do.

Industry expectations for TLRY are for EPS of $-0.14. I have not heard anything in the way of a whisper number. Revenues are projected for the quarter at $10.1 million, but there is such a wide range of analyst expectations here, that I am hesitant to label anything as consensus. The lion’s share of that revenue, safe to say, is expected to have been provided by the medical use segment.

Perhaps the highest profile impact on Tilray equity performance, has been the interest of outspoken investor Andrew Left of Citron Research. Left has maintained a short position throughout that would appear dangerous to most, yet Left seems very confident. Not only does Left mention the probable entry of U.S. competitors into the space at some point over the next few years, while stressing increased downside risk as TLRY nears the IPO lock up expiration date. I think that item right there is a very real threat to this stock, one that might be significantly understated.

That date is not readily upon us, but it is out there stalking a shareholder near you as soon as January 15th. The stock you may recall was priced at $17 bucks a share.

The chart does not provide, at least not to me, a lot of guidance. We only know that volatility will likely increase as we move through winter. My instinct is to join Citron on the short side. Bear in mind however that almost 20% of the entire public float is held in short positions so this is a crowded trade. An investor would be out of his or her mind to short this one un-hedged. A January $115 TLRY call would cost the trader $18.70 this morning. For me, that makes this name a no-go.

The Something For Nothing Trade?

Bet you did not know that this morning you can sell one January 2020 (I kid you not) $50 put at $11.60. Just goes to show you that enough people think that price likely enough to overvalue (?) such a possibility. If you do get stuck buying these shares, (Better have $5 grand handy at the time) your net basis in 14 months would be 39.40. If not, that’s $1,160 in your pocket. Holiday shopping money?

(This column originallyappeared at 11:03 a.m. ET on Real Money, our premium site for active traders. Click here to get great columns like this from Stephen “Sarge” Guilfoyle, Jim Cramer and other experts throughout the market day.) 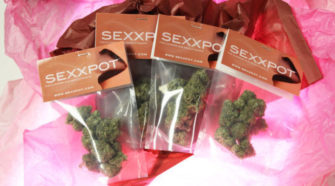