Customers line up for recreational cannabis outside a dispensary in Hollywood, Calif., on Jan. 12, 2018.

A trio of U.S. cannabis companies raised nearly US$1-billion from equity sales this week ahead of listing their shares on a Canadian exchange as investors turn their attention to marijuana stocks with exposure to the American market.

In the largest share sale by a U.S. cannabis company in Canadian markets, Massachusetts-based Curaleaf Inc. sold US$400-million of stock in a private placement, chief executive Joseph Lusardi said. New York-based Acreage Holdings raised US$350-million and Arizona-based Harvest Enterprises Inc. raised US$200-million, according to investment banking sources. There was strong demand for all three of the offerings from Canadian, European and U.S. institutional investors, with more than US$1-billion of demand for both Curaleaf and Acreage shares.

Curaleaf, which was valued at US$4-billion before its latest financing, is listing Monday on the Canadian Securities Exchange (CSE) and will be the first of these large players to go public.

Marijuana firms that operate in multiple U.S. states have become the new darlings on Bay Street. At the same time, investors have been dumping Canadian weed stocks a week after the country legalized recreational cannabis. The Canadian market is seen to be saturated, with 132 licences handed out by Health Canada. The firms are also facing heavy restrictions on advertising and branding, provincial distributors that disrupt the supply chain, and the inability to sell edibles and concentrates until 2019.

Even though cannabis is federally illegal in the United States, there’s much more leeway for operators in states that have eased restrictions. And the big U.S. companies are already making money, whereas the Canadian firms are promising that one day they might be able to.

“Investors are recognizing that the U.S. market has tremendous growth potential and there’s more of an interest in the sector than there was half a year ago,” Curaleaf’s Mr. Lusardi said. “Public perception of cannabis in the U.S. continues to get more favourable.”

Curaleaf has a presence in 10 states – its largest footprint is in Florida – and is in the process of getting licensed in two more. It owns 28 dispensaries as of last month, and plans to open 13 more this year. It has 12 cultivation facilities. In 2018, it has booked US$45-million in revenue, it said in an investor presentation.

Acreage does business in 14 states and is vertically integrated. Its board features former Canadian prime minister Brian Mulroney, the former Republican Speaker of the U.S. House of Representatives John Boehner and former Massachusetts governor Bill Weld.

Harvest operates in 10 states and says it’s the largest player in its home market of Arizona. As with Curaleaf and Acreage, Harvest is licensed to grow, process and sell its product across multiple states.

All three companies say they’re going public on the CSE by way of a reverse takeover.

The CSE is landing these U.S. companies because it takes a liberal view of U.S. regulations, while established exchanges such as the Toronto Stock Exchange, New York Stock Exchange and Nasdaq continue to steer clear of any company with assets in the United States that run afoul of U.S. federal law. The CSE lists the shares of 107 cannabis companies, of which 50 are based in the United States.

The competing Neo Exchange also lists a handful of stocks that have U.S. marijuana holdings or intend to, including Halo Labs Inc., Maple Leaf Green World Inc. and Canaccord Genuity Growth Corp, which recently agreed to acquire Columbia Care LCC in a reverse takeover that valued the U.S. medical cannabis company at US$1.35-billion.

The rules of the TSX, where the largest Canadian cannabis companies are listed, prevent its issuers from having any U.S. assets on their books. That has forced players such as Canopy Growth Corp., Aurora Cannabis Inc. and Aphria Inc. to tip-toe around the United States by signing agreements that give them the right to acquire U.S. assets only if marijuana becomes legal at the federal level.

Danish cannabis oil firm StenoCare makes its stock market debut on Friday, aiming to take advantage of a recent surge in investor interest in a substance that is still banned or restricted in many markets. Reuters

Previous Should Cannabis Be Legal in the United States? Politicians and Pundits Weigh In 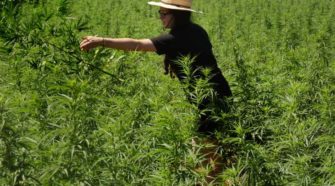