But the flattened plants were not his only problem. Because of water issues, he had used acreage not officially permitted for hemp by the state agriculture department. He called the agency to ask whether he should hire a crew to manually prop up the 25,000 plants. “They said, ‘Keep doing what you’re doing,’ ” he remembers.

He got a different response several days later when a phalanx of law enforcement officers arrived, handcuffing and arresting him for illegal hemp cultivation, then bulldozing his crop. “It must have been 30 of them coming from everywhere,” Pendarvis said recently, surveying the crushed remains on his farm northwest of Charleston. “Now it’s just all rotted up.”

As his case wends through the courts — despite South Carolina not yet prescribing a penalty for what it considers a misdemeanor crime — Pendarvis has become emblematic of the hurdles that farmers face in growing a crop legalized through the 2018 federal farm bill. Laws are evolving across the conservative South, where hemp grows well thanks to the warm weather and fertile soil.

Hemp is outwardly indistinguishable from marijuana and smells the same when burned. Difficulty in telling the two apart is causing headaches throughout law enforcement. South Carolina, for one, requires farmers to be licensed and their fields approved. Crops must be tested to keep THC, the psychoactive compound found in marijuana, at 0.3 percent or less of the plant’s dry weight.

“There are no manuals yet. Laws vary,” noted Billy Styles, a North Carolina hemp farmer who consults in both Carolinas and across western states. “I tell farmers to abide by the law — and understand it’s moving.”

The same holds true for the consumer market. In Georgia, consumption of hemp and hemp products is legal, but not the consumption of cannabidiol, the oil commonly extracted from hemp and used in a vast array of products. In North Carolina, it is legal to sell hemp flower that contains negligible levels of THC, but selling flower in smokable form may soon be banned. South Carolina allows consumption of CBD oil; smoking hemp flower is legally murky.

Despite all the uncertainty, hemp is a lucrative draw. Its tough fiber is starting to replace wood pulp in paper, and manufacturers, including BMW, with a facility in Greer that is South Carolina’s largest employer, have begun using hemp-based cloth and plastic in cars.

CBD is even more of a market winner. Pendarvis said the plant’s profit potential vastly eclipses that of corn, soybeans, peanuts and the other staple crops his family has grown for generations. He might earn a thousand dollars for an acre of peanuts, he says, but nearly a million dollars on an acre of quality hemp.

Given that he normally cultivates around 3,500 acres of corn, soybeans, cotton and peanuts, the difference is one that might secure his future.

Pendarvis first ran into trouble after raising a first round of seedlings in a greenhouse in May and realizing that the water supply for his permitted field was insufficient. With a limited planting window, he utilized an adjacent field and another two acres in a field owned by a colleague 100 miles north.

He says he called the state agriculture department and was told to submit an amendment form. According to agency spokeswoman Eva Moore, he did not complete the form until after officials inspected his property. Weeks before the hurricane hit, they reported him to the law enforcement division that handles state-level drug crimes for willfully planting on an unpermitted field.

His attorney, state Sen. Brad Hutto (D), contends that Pendarvis was treated like a drug trafficker by the officers who showed up and that his crop was destroyed despite the South Carolina attorney general saying judicial review should first be sought in such cases. Citing pending litigation, the South Carolina Law Enforcement Division declined to comment on the case or its execution of hemp law.

Other farmers were shocked by the arrest, Hutto said.

“Farmers are the most rule-abiding people you’ll meet” and certainly not accustomed to being arrested for growing a crop, he noted. Market prices, bad weather, equipment failures — that’s what keeps them awake at night. “The last thing they need to worry about is law enforcement.”

The Palmetto State had 3,300 acres planted in hemp in 2019 compared with 256 acres the previous year. And even with the possibility of tougher federal regulations for THC testing in 2020, Moore said Friday that it is prepared to license upward of 300 hemp farmers — nearly double the number approved in 2019. Some of them have a high profile, including former state representative Chip Limehouse and legendary Clemson football coach Danny Ford.

Pendarvis is a substantial man of 38 years with a deep middle Carolina drawl. He comes from a long line of farmers who raised cotton and tobacco. “My daddy’s granddaddy started farming right here in 1919,” he explained, leaning up against a muddy pickup truck and pointing across the narrow stretch of road. “That’s the original farm house.”

He remains amazed and horrified by his brush with the law — not just his experience of being arrested, but also of being handcuffed, fingerprinted and jailed. Plus, he still regrets the fate of his hemp field. “I probably had one of the biggest crops that’s ever been around,” he said.

His license has yet to be pulled, so Pendarvis plans to grow hemp again. He is well acquainted with the plant’s needs because of the similarities between farming and curing hemp and tobacco.

“Hemp is going back in there like a cash crop,” he said. “Kind of like tobacco was. . . . I figure you have a five-year shot to make big money right off the rip, then it’ll be just like every other market. The price will come down.”

Previous Our Voice: Some good news about industrial hemp - AberdeenNews.com

Eaze Expands Distribution of Non Psycho Active Cannabis Across US

The Biggest Surprise of the $8.5 Billion Cannabis Boom? Dozens of the Startups Striking It Rich Are Actually Really … 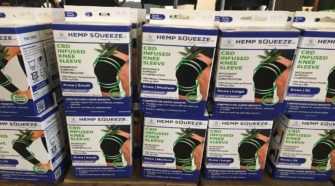