Industrial hemp can be turned into many things.

Or a tiny house made of hempcrete.

Examples of these things will be on display May 2 at the Industrial Hemp Awareness Fair in Columbia.

Borough council on Tuesday gave the borough’s Parks and Recreation Committee conditional approval to hold the fair at Locust Street Park. The decision is pending approval by the Old Columbia Public Grounds Co. and funding in the 2020 budget.

Locust Street between North Fifth and North Sixth streets would be closed during the fair.


“We’d like to continue to educate. We need to make the distinction of what industrial hemp can bring to a community like ours,” event organizer Susan Love said.

Love, who is a member of the borough’s Parks and Recreation Committee, said costs to hold the free event will be covered by vendor fees and sponsors.

“I don’t know that Columbia will be a hub,” he said. “ … But a manufacturing facility has gotten zoning approval here. This will be a great opportunity to educate people.”

In September, Columbia’s zoning board approved a variance to allow Floyd’s of Leadville to process hemp at 185 N. Front St. The Colorado-based company that sells cannabis derivatives believed to have health benefits is owned by Farmersville native Floyd Landis.

A federal law change loosened restrictions on industrial hemp late last year, and dozens of Lancaster County farmers are among those who grew the crop for the first time this year as a result.


About 50 of those farmers grew for Floyd’s of Leadville.

Jake Sitler, the company’s director of business, said Tuesday that harvest was almost completed and he hoped processing in Columbia would start in about two weeks.

Columbia, he said, was a central location that had space available for a good price, and being near the Northwest Lancaster County River Trail opens possibilities if they ever want to invite the public in to see the processor at work.

“We’ll definitely participate,” he said of the fair.

Since she started planning the fair a few weeks ago, Love said, more than 30 businesses and organizations have expressed interest in participating.

One of them is Shawn House, a local resident who has long advocated for industrial hemp — and is the force behind Hempzels, “The original hemp pretzels.”

Educating the public will be key to growing the hemp industry, House said, and it “couldn’t be better timing” for Love’s proposal.

Noting that Columbia almost became the capital of the United States in 1789, he said, “Maybe Columbia could be the cannabis capital of Pennsylvania.”

LNP correspondent Chris A. Courogen contributed to this story. 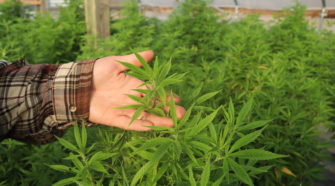