Do you have a pet? If so, what does that mean to you? According to this survey, a majority of Americans (69%) consider their pets as family members, and one in five (23%) even see their pets as children. Furthermore, Millennials view their pets as starter children since they delay having kids of their own, getting to the point where almost 40% of them would take maternity/paternity leave upon welcoming a new pet.

Regardless, as pet owners, we always want them to be absolutely happy and healthy. In that sense, when they suffer, we suffer too. Just like humans, they sometimes have to deal with a disease or a disorder, which can be very frustrating and even heartbreaking to us. Lately, though, CBD usage for pets to relieve those health conditions has been frequently and actively studied.

The thought of turning to cannabis-based products like cannabis skin cream or THC tincture was laughable just a few years ago. You can ask Nevada Senator Tick Segerblom who tried to pass a bill back in 2015 in his state that would allow pets to receive medical cannabis just like people. The bill did not pass. “When my bill was first introduced, it was perceived as a joke, now 3 years later, everyone is on board,” Segerblom tells us.

Cannabidiol (CBD) is one of the 113 cannabinoids found in cannabis and has been the most sought-after subject of much research due to its various medical applications, including its therapeutic attributes. The compound is non-psychoactive (meaning it does not make you high, often associated with THC), proving itself as a safe and effective option for those who may be concerned about the mind-altering effects. CBD also has no known toxicity level, and therefore, is incapable of causing an overdose. And it comes in a multitude of forms like cannabis skin cream, medical cannabis tincture, and even CBD gummies.

“There are no published studies of CBD in pets. I could see it being beneficial because these receptors exist in animals, as well. And, there are those stories of people saying that pets felt better with less anxiety or it helped with issues better,” according to cardiothoracic surgeon Dr. Mehmet Oz, arguably one of America’s best-known doctors, who lost his beloved black Lab named Rosie in the summer of 2016 (and Khaleesi joined the Oz clan shortly after).

Previous How Artists Use CBD to Relax and Create

Next CBD Products Are Helping Athletes with Their Physical Ailments 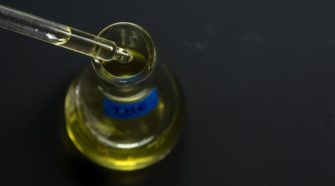 Cronos Group to cultivate cannabis in a lab