Cannabis is the most commonly used drug by women during pregnancy with an estimated prevalence of use in Colorado of 5.7%. THC and its metabolites freely cross the placenta and blood-brain barrier to bind with cannabinoid receptors, disrupting the endogenous cannabinoid signaling system during a critical period of development of cortical circuitry structure and function. The density of cannabinoid receptors in the developing brain is high, especially in the limbic areas and prefrontal lobes. Research in animal models suggests synaptic plasticity in the prefrontal lobes as well the amygdala and hippocampus are impacted by the prenatal cannabis exposure; regions associated with both cognitive and emotional control, thus influencing long-term deficiencies in attention and impulsivity. This pilot study will collect preliminary data on the structural impact of in utero cannabis exposure on region-specific morphology and structural connectivity of white matter tracts that connect to the prefrontal lobes and the limbic regions shortly after birth, before confounding by the postnatal environment becomes a major influence.

Cannabis is the most commonly used psychoactive substance among pregnant women, with an estimated prevalence of use between 5 to 20% in in the United States. Little is known about the neurodevelopmental consequences for the fetus, particularly in the context of contemporary cannabis use patterns including high potency strains, cannabinoids and novel routes of administration. Colorado leads the nation in implementation of legalized medical and retail marijuana. Coupled with a growing pro-marijuana advocacy movement, marijuana may be perceived as “safe” to use during pregnancy. The local actions of endocannabinoids are in place in the placenta during fetal brain development and THC and its metabolites freely pass the placental barrier and the fetal blood-brain barrier. Furthermore, cannabinoid receptors appear to be more widespread in the fetal and neonatal prefrontal cortex (PFC) and the limbic areas (the amygdala and hippocampus) than in the adult brain, thus the in utero period may be a sensitive period of human brain development during which exogenous cannabinoids could permanently alter neurodevelopmental processes. Human epidemiologic studies across diverse populations have reported an emerging theme of deficiencies related to impulse control and executive functioning among offspring with in utero exposure to cannabis starting in adolescence. Only rudimentary aspects of executive function are present in infants, thus evidence of an impact during infancy and the toddler years is sparse, inconsistent and confounded by the postnatal environment (i.e., daycare, caregiver functioning). Research is needed to evaluate the proximal impact of in utero cannabis exposure on robust metrics of neonatal brain morphology and structural integrity of white matter tracts that connect to the PFC and the limbic regions before the influence of postnatal exposures become a major confounding influence.

Specific Aim 1: To determine the magnitude of the association between in utero exposure to cannabis and neonate brain morphology and structural connectivity.

Hypothesis: In utero exposure to cannabis (assessed by THC metabolites in meconium) will be associated with the following neonate brain structural outcomes: (1) Grey matter: reduced volume in the PFC and limbic regions (i.e. the amygdala, hippocampus); (2) White matter: reduced structural integrity (assessed by fractional anisotropy) of white matter tracts that connect to the PFC and the limbic regions including the uncinate fasciculus and the cingulum bundle. The associations will be independent of other maternal substance use (i.e. tobacco), postnatal feeding practices (i.e. breastfeeding), socio-demographic characteristics and maternal mental health. 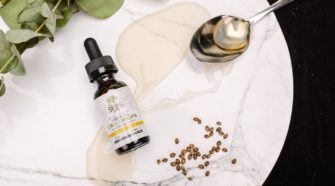