Half a dozen industrial fans hum inside a football field-size warehouse in White City. Lined up on the ground in neat rows are 500 white plastic bags, each three-foot by three-foot. The bags are full of hemp.

Hemp Inc. farmed on 42 acres of land on the Rogue River in Grants Pass this year. The hemp in these super sacks is drying to become smokable CBD cigarettes.

The research around CBD is murky. It comes from hemp and is in the cannabis family, though it doesn’t get users high. But these days it’s being put in everything from dog treats to an FDA-approved epilepsy medication.

Epling wears a gray fedora and blue puffy jacket inside the breezy Hemp Inc. warehouse. This strait-laced non-smoker from Las Vegas is not necessarily who you’d expect to be a cannabis producer, but the rapidly growing CBD market is drawing in entrepreneurs like him.

Epling reaches inside a white super sack to smell the pungent drying buds inside.

“We should end up with at least 60,000 pounds of really high quality pre-98 OG Bubba Kush,” he says, recalling the name of the plant’s strain.

Growing Pains Of A New Industry

According to the Oregon Department of Agriculture, the number of hemp growers in the state more than tripled since the federal Farm Bill passed in late 2018, removing hemp from the Controlled Substances Act. The land used to farm hemp increased five times over in Oregon, from 12,000 to 63,000 acres.

But for some in Southern Oregon, where hemp farms have become a ubiquitous part of the landscape, the new industry experienced growing pains in its first year of legalization.

The spike in growth caused price fluctuations. Growers struggled to find farm workers to harvest their crop and there were shortages of hemp drying facilities. And, not all of the new farmers knew what they were doing.

“They may have not gotten the crop in the ground at the right time, they may not have harvested at the right time, it was wet early this year,” says Sunny Summers, cannabis policy coordinator with the Oregon Department of Agriculture. “There’s a lot of reasons why we’re not going to see 63,000 acres.”

Even with the industry’s growth, Summers says she doesn’t expect there to be an oversupply of hemp or, what it’s being largely grown for in Oregon, CBD oil.

The turbulence for growers continued in late October when proposed regulations about growing hemp came out from the U.S. Department of Agriculture (USDA).

The proposals create stricter rules to ensure hemp contains very low levels of the psychoactive chemical THC. There’s also a shorter timeframe when plants can be tested for THC and testing must be done in labs certified by the Drug Enforcement Administration (DEA).

“That definitely is way more restrictive than what we have currently,” Summers says.

Good Business For The Experienced

Business wasn’t bad for everyone in 2019.

Cheryl Johnson is a longtime cannabis farmer. She makes CBD lotions and candies with her business West Coast Baked Goodness. In her office in White City she removes the lid from a generic looking white container. Inside is bright orange powder.

“These are developmental products,” Johnson says. “It’s going to be in everything, let’s just say that.”

Besides making edibles, Johnson advises growers on how to stay in compliance with state and federal cannabis laws with another business called House Calls Financials. Over the past year, she says, a growing number of conventional farmers in the Rogue Valley are producing hemp.

“They’re killing it. They know how to grow. In three years’ time it’ll be a farmer’s game,” she says.

Johnson is not particularly sympathetic to what she describes as the ‘green rush’ of new growers entering the hemp industry this year, who are now distressed about proposed USDA regulations.

“People have to understand, this is a real business,” she says. “If you’re going to lose money now that there are rules and regulations, then your margins weren’t good enough in the first place and you shouldn’t be in the industry.”

But even with all the growing pains this year, she says, hemp offers the potential for a world-wide market for those who know how to do it right.

After nearly a year of the legal hemp industry in Oregon, even the experts don’t agree. It will take time to know whether hemp will become a permanent part of Oregon’s economy or another ‘green rush’.

Sunny Summers with the Oregon agriculture department says the industry will correct itself.

“At some point it will level out, but [hemp] will become an important part of Oregon’s agricultural economy,” she says.

The growers with Hemp Inc. produced three times what they’d projected for 2019, according to Barry Epling. But the industry’s volatility has him thinking about bubbles.

“There was an internet bubble. There’s been housing bubbles. There was a telecom bubbled. This is a hemp bubble,” Epling says. “If you’re in early enough I think you’ll do really well but at some point, the bubble’s going to burst.” 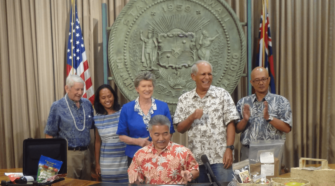