Legislators will soon congregate in Pierre.

You can expect a lot of industrial hemp pontification.

Allowing its growth under certain restrictions to avoid its THC morphing into marijuana was approved by the Legislature last year.

Gov. Kristi Noem put a lid on the plan, vetoing for fear it would be a first step toward legalizing pot.

More than a century ago, industrial hemp was part of a legislative discussion, although for a different reason.

In 1906, South Dakota farmers purchased an estimated 757,575 miles of binder twine, some of it made from industrial hemp and some from the sisal plant.

At that time small grain production in the state was in its infancy, yet production required twine enough to wrap around the world’s 25,000-mile girth 30 times.

Grain harvests had been revolutionized when reapers came along in the late 1890s with knot-tying machinery able to quickly snug up a bundle of grain automatically.

Each bundle needed about 18 inches of twine made of hemp or sisal. Six or eight neat bundles could then be stacked in shocks for pick-up and transfer to a waiting threshing machine.

South Dakota’s agricultural juggernaut was just getting started in 1906. The need for binder twine would surely grow as the state’s homestead land filled and as farming practices improved.

Wisely, South Dakotans figured it was time to break up the nation’s binder twine trusts (aka monopoly) and put the income from the sale of twine to good use for all South Dakotans.

In the November election in 1906, citizens voted to tax themselves $1.50 for every $1,000 of their assessed property value for one year. The income would build a twine factory at the state penitentiary in Sioux Falls.

At that time a handful of the 212 inmates were already busy making shirts that were sold for a state profit. Prisoners (including two females) could now also produce twine and help pay penitentiary expenses.

A state-owned plant would also insure a steady supply of binder twine for South Dakota farmers at a reasonable price.

Sisal from Yucatan became the plant of choice, proving better than hemp, which was a grasshopper delicacy, as was just about everything else in its way.

Except in 1919. A few prisoners turned to sabotage. They cut the twine about every 100 feet as it was being wound into twine bales. Millions of severed bales were put on the market.

The result caused considerable consternation for farmers. Their harvest sequence was interrupted. Farmers had to stop for repair many times every acre. Harvest ground to a halt.

Farmers were red-faced mad, shaking fingers at Gov. Peter Norbeck and legislators. The state bought back defective bales as best it could, and arrangements were made to buy good twine from other states.

Eventually the problem was dealt with.

Now hemp isn’t used for binder twine, but in textiles, building materials, paper and other products. But its a bit of the dreaded THC in it that will be our Legislature’s challenge later this month. 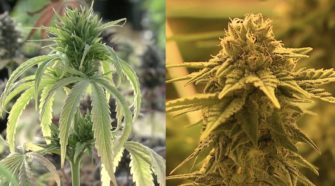