Since the beginning of the new public agricultural program piloted this spring, the state has licensed dozens of hemp growers and manufacturers, Connecticut Gov. Ned Lamont announced last week.

The agricultural program began on May 9 when Lamont signed legislation that initiated a state hemp research program and set boundaries for the legal amount of THC — the main psychoactive component in marijuana — permitted within Connecticut-cultivated hemp. Hemp is the strain of the Cannabis plant used for industrial purposes, and does not contain a THC concentration capable of producing euphoric effects. According to the Sept. 5 Lamont press release, policymakers approved the bill unanimously, in an effort to introduce guidelines in time for the hemp growing season — which begins around May, according to Purdue University.

“Since we launched this hemp program, we’ve developed great partnerships with [Connecticut] farmers — some of whom have been in the industry for many years and are diversifying their agricultural opportunities with hemp,” Lamont said in the press release. “I’m excited about the opportunities this program is creating.”

According to the press release, Lamont’s office has licensed 82 hemp growers, 21 manufacturers and two processors since last May, implying a bright future for the Nutmeg State’s nascent hemp industry. Right now, 294 acres of Connecticut land are being used to grow hemp.

According to Jeff Wentzel, a founder of the Connecticut Hemp Industry Association, the Constitution State’s burgeoning hemp market will certainly be a positive investment. Wentzel told the News that while farmers grow hemp, other specialists like processors and extractors work to transform the product into more marketable items. He added that beyond job prospects, consumers will also benefit from hemp products that are both high quality and local.

Hemp can be used for a variety of products ranging from lotions to “hempcrete,” a type of concrete mixed with hemp used in construction. However, Wentzel said that the majority of Connecticut’s demand for hemp centers on CBD, or cannabidiol. CBD has been shown to treat pain, anxiety and sleep disorders, along with a variety of other medical conditions. According to Harvard Medical School, while CBD is an active ingredient in both hemp and marijuana, hemp does not contain significant concentrations of THC, often making it a preferable alternative to marijuana.

“The demand for CBD has been almost exponential [for] the last couple of years,” Wentzel said. “There seems to be real movement toward natural alternatives to opioids and other overprescribed medicine so it’s just a sign of the times. CBD is very popular right now.”

Hemp production isn’t just an opportunity for new businesses. Some farmers, according to Wentzel, may now have a chance to rejuvenate some of their lands that were previously left fallow due to lack of profit.

Furthermore, economic advantages from hemp are not restricted to Connecticut. After Kentucky-native Nathan Hall SOM ’17 FES ’17 realized that growing hemp could help revitalize some rural Appalachian communities, he later launched a series of startups that encouraged farmers to cultivate hemp — which may still prove lucrative even if some farmers own relatively small parcels of land.

Hall added that while he mostly works in Appalachia, he estimates that Connecticut could soon become a central growing market.

“There’s a lot of potential benefit[s] for local economies for sure,” Hall told the News.  “Connecticut is a little lighter than other states in terms of getting the legislation in place to have a state program … I think it’s probably really well positioned to be in this market just being as close as it is to New York, Boston and big customer bases.”

Hemp’s legal presence in the state basically began last May with Lamont’s legislation. However, hemp was legalized on a federal level in December 2018, when President Donald Trump signed the Farm Bill that allowed hemp cultivation nationwide.

According to the Agricultural Marketing Resource Center, the total retail value for hemp products in the United States in 2017 was $820 million.

Previous Hemp Licenses Quadrupled in 2019, But Will There Be a CBD Surplus? - Cannabis Now 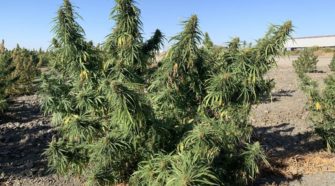