Editor’s note: This is an excerpt from the final installment of The Long, Hard Road, an Enquirer special section to be published Thursday on Cincinnati.com.

Daryl Burns looks out on his crop, and it is not a familiar sight. The 66-year-old lifelong farmer took a gamble with his crop this year.

“We had to,” said Addison Burns, Daryl’s 33-year-old son. “Tobacco was done, and we had to try something new.”

The Burnses are hemp farmers, at least for now.

This Campbell County family, like many across the U.S., has been dealing with declining tobacco profit. The labor wasn’t worth it anymore.

They won’t know how profitable their first hemp crop is until the process is over, and that makes Daryl Burns nervous.

The weather will determine if what they have grown is, in fact, legal.

Daryl Burns, 66, holds dry hemp in his hands on his farm in southern Campbell County on Monday, November 11, 2019. Burns grew tobacco his entire life. He and his son, Addison Burns, had to learn a lot to make the switch from tobacco to hemp. They planted 4 acres of hemp and are waiting to see how profitable their first attempt at it was. (Photo: Meg Vogel/The Enquirer)

That’s because weather impacts how much CBD and THC a plant has. To have a profitable – and not illegal – crop, the Burns family needs its plants to have a large percentage of CBD and a very low percentage of THC.

CBD, short for cannabidiol, is the nonpsychoactive chemical in hemp that is rising in popularity because it’s believed by some to reduce anxiety and help with sleep and pain. THC, short for tetrahydrocannabinol, is the compound responsible for the psychotropic effects of marijuana.

At $3 a plant, the Burns family spent $24,000 to plant 4 acres of hemp. It was another few hundred dollars to put down special tape and plastic to help the plants grow, something tobacco never needed. Hemp takes a lot of “babysitting,” as the family puts it.

“We don’t go home for lunch. We bring us a bologna sandwich and spend the day here,” he said.

The investment and time commitment could be worth it. In 2018, hemp processors reported $57.8 million in gross product sales, compared with $16.7 million in 2017, according to the Kentucky Department of Agriculture.

But a lot could go wrong.

Hot temperatures, like the days Northern Kentucky had this summer, could produce more THC. Then the state can destroy the family’s crop. No one will know the exact levels until the plants are sent to the processor. How long that takes depends on how the weather dries the plant.

CBD levels can vary as well, which means the pay scale varies. Plants have different levels, and some levels vary within the same plant.

“But that’s farming,” the elder Burns says. Once, he lost an entire acre of tobacco in a five-minute hailstorm.

In the barn, as his hemp dries, Daryl smushes one of the dry plants between his fingers. It’s how to release the oil that has the CBD in it, he explains.

The market for this magic stuff is expanding. A farmer could do worse.

“I think,” Daryl says, “we’ll probably do it again next year.”

Previous A look behind the scenes of how the emerging hemp industry remains in regulation - wpde.com 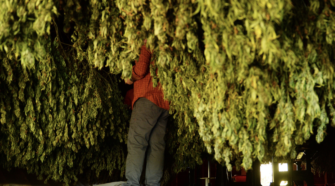 Industrial Hemp Is the Answer to Petrochemical Dependency-Forbes