However, he firmly believes in starting small—manageably small.

It’s advice many farmers who rushed into the hemp market—since legal restrictions on growing it in were lifted on a limited basis in certain states six years ago—probably wish they had followed now that the bloom has fallen off the Cannabis sativa plant, so to speak.

Cannabidiol (CBD) oil peaked at $45,000 to $65,000 per acre during boon times, but prices dropped by 60-80 percent in 2019 because of a flooded market. Some unscrupulous buyers who promised farmers they’d be back to collect tons of biomass failed to show up. Others went bankrupt.

Furthermore, the misconception that industrial hemp and marijuana are the same—they definitely are not even though they look alike—continues to stand in the way of widespread acceptance. And, tales of shoddy quality in the CBD retail marketplace are all too common.

So at this point, Dybdahl and his two partners who own BC Hemp Co. in Eau Clarie, Mich., absolutely agree with the conventional wisdom tempering the attitude toward hemp farming these days.

“I would say 100 percent, pump the brakes,” Dybdahl said last Thursday night after keynoting the Berrien County Conservation District’s annual meeting and banquet held at the Sarett Nature Center in Benton Harbor. “Definitely, if you’re going to get into the industry, start small and try your hardest to hone in on contracts and the market you’re trying to get into.”

How small did Dybdahl, the CEO of BC Hemp, and co-founders Ryan Piedt and Joel Mbungu start?

Jaws dropped and eyebrows shot up when Dybdahl told the 83 people in attendance the story of BC Hemp’s very first planting last May and subsequent fall harvest.

It all began on 32 acres of land where BC Hemp’s operation manually planted 66,000 clones by hand. And in September, the three partners, their seven full-time employees and 35 or so seasonal workers harvested the crop by hand, using tree loppers to cut the thick, fibrous stalks.

The crew then used a scissors-lift to hang each plant with baling twine from the rafters of a 20,000-square-foot drying facility that was quickly filled to capacity, necessitating the lease of an additional 10,000 square-foot building that was filled and emptied three times.

“It was a crazy time, that’s for sure,” Dybdahl said. “The harvest was the most intense thing I’ve ever been a part of.”

From such humble beginning sprouted not only mature plants with 10-15 pounds of biomass, but the seemingly unlimited potential for hemp-based applications and a sense of reassurance BC Hemp is doing it the right way.

“The only reason that we’re growing 75 acres this year is that we got contracted to do so,” Dybdahl said. “Our model is seed-to-sale. What we’re trying to do is develop genetics that work well here in our Midwest climate and soil profiles, and also develop a high-quality product from what we get out of our field, and be able to deliver that to our community.

“We’re in constant communication with over 40 farmers doing this, and the biggest concern I have (for farmers) is that it’s a totally different crop from something like corn or soybeans. There’s no grain and most aren’t used to trying to find a market.”

It costs $10,000 to $15,000 an acre from planting hemp to harvesting it, and Dybdahl, a former Berrien Springs High School football player, didn’t downplay the commitment a hemp startup has to make to achieve success.

“We had such a hard time trying to find buyers for our crop, but with persistence and the relationships we developed over the past year we’ve been able to move our crop, slowly but surely,” he said. “If I had any statement to make to farmers that are having issues it would be, don’t give up and keep on trying to find avenues for selling because if you don’t find and develop that market, you’re going to be left holding onto it.”

Based on the metrics used to gauge the viability of BC Hemp, Dybdahl and his partners couldn’t be happier with the results. For example, BC Hemp plants passed seven compliance tests proving they didn’t exceed the legal limit of .3 percent THC. Plants that test higher are considered marijuana and must be destroyed.

“Our actual ability to complete the task we set to accomplish, which was harvesting and having all of the hemp plants in the field pass the MDARD test, that was a success,” Dybdahl said. “In regards to revenue generated, that was a success. We had goals to develop a retail line, and that was a success. To be able to help educate our community, we were able to do that. Creating jobs was a big thing for us and we did.

“We don’t feel success only comes in terms of monetary success. We weren’t even sure we were going to be able to have a market, but we developed those relationships and were able to generate revenue and create a revenue stream to get the product out of the field, and then further, to pay our employees who helped make that happen.

“Pretty much all (the money) that’s come in is going out, so we did have a loss in 2019, but the assets we have from our fields, our oils, products, etc., they will create a profit for us in year one.”

Nancy Carpenter, district manager of the Berrien Conservation office in Berrien Springs, was pleased to hear Dybdahl dispel some of the pie-in-the-sky expectations those expecting to strike it rich with hemp farming right away might have.

BC Hemp owns 6 ½ acres of land and leases the rest from Dybdahl’s in-laws and Piedt’s parents.

“My in-laws’ land wasn’t planted (before) and Ryan’s parents’ land (20 acres) was planted with squash,” he said.

BC Hemp distributes a product line bearing its name to 15 retail outlets in southwestern Michigan and Chicago, but the company isn’t directly involved with the production process. It also provides oil to manufacturers that their CBD under different brand names.

“We grow the oil, but we leave the formulations and manufacturing to professionals that specialize in that,” said Dybdahl, who nonetheless insists on meeting the highest industry standards.

The primary reason for growing hemp these days is for the CBD oil, but what may be the most versatile plant ever germinated can be used for more than therapeutic purposes for people and animals, including dogs and horses with anxiety issues.

“Our pet treats are our biggest seller,” said Dybdahl, who was wearing a denim jacket made from hemp.

Hemp was one of the first plants spun into fiber thousands of years ago and ropes made of hemp were used to rig ships during the golden age of merchant sailing. Dybdahl passed around fiber-based building blocks made from what’s been dubbed “hemp-crete” and hemp material can be pressed into other construction products. CBD can be used to make bioplastics and biofuel.

“If we’re going by a percentage base, I’d say we’re only at 4 percent of where this could go because there’s over 40,000 industrialized (products) used for hemp and its byproducts” he said. “The products are limitless. The biggest threat (to hemp development) are those who are stuck in their ways.”

Because hemp grows so fast and could be cultivated twice a year in some areas of the country, it could be a solution to environmental concerns from pollution to deforestation.

“It’s just incredible,” Dybdahl said. “There’s not a day that goes by than I’m not learning more about it. The stigma of marijuana and the guilty-by-association perception was the reason for its demise and the fall of industrial hemp. It’s so new and unique, the surface hasn’t even been scratched.”

This is where the big-thinking part comes in.

“The infrastructure’s just not there yet for the fiber, but we as a company can’t wait for that to happen,” he said. “Our guess is about 4-5 years where we’re going to actually have that infrastructure.”

When that happens, Dybdahl said, “This industry will fly.”

Return to Top of Page

What’s Next For The Hemp Business? – WUTC 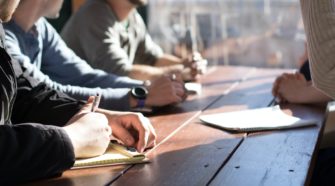