Welcome to The Checkout: an express lane for weekly news you need to know, always 10 items or less.

Luna & Larry’s Coconut Bliss is looking to bring sweet, smooth, dairy-free joy to more consumers with this week’s release of Everyday Bliss, the company’s first new line since launching in 2005. The products will be sampled next week at Natural Products Expo West.

“It’s very much a labor of love and a response to the feedback and needs of our current customers,” Kim Gibson Clark, Luna & Larry’s Coconut Bliss president and CEO, said in a release. “[It] opens up the opportunity for us to experiment with other types of organic, sustainable plant bases. We’re excited to begin this new chapter.”

Darcey Howard, the brand’s global marketing director, told NOSH the idea behind Everyday Bliss is to reach a broader customer base as private label plant-based offerings have expanded into the freezer aisle. Certain ingredient choices were made for the product to hit a lower price point; for example, the coconut base is sweetened with organic fair trade sugar rather than agave, which is used in the core line. As a result, the texture is lighter — inspired by a plant-based soft serve the company offers in foodservice — and the flavor is more familiar to consumers. Additionally, the packaging uses a “simple and approachable” color palette to reach more consumers, Howard noted.

Everyday Bliss is sold in four flavors: Caramel Macchiato, Salty Peanut Butter Chip, Salted Caramel Chocolate Chip and Vanilla Brownie Swirl. Each retails for $5.49, while the original Coconut Bliss line is $6.99. Everyday Bliss debuted this week in Stop-n-Shop, Albertsons East region and Safeway’s Southwest region; the brand’s original products are sold in 80,000 U.S. stores as well as in Canada, Australia and South America. Howard noted that the majority of the brand’s future growth will continue within the natural channel, but the company will also seek a greater presence in food service. Still, the freezer case has room for more innovation.

“Who knows what the next plant-based trend will be, but the Everyday Bliss line gives us the opportunity to experiment,” Howard said.

After being appointed commissioner of the Food and Drug Administration (FDA) in December, Stephen Hahn spoke publicly about hemp and CBD for the first time during a presentation Wednesday at the National Association of State Departments of Agriculture (NASDA) Winter Policy Conference in Arlington, Virginia. Hahn said that the agency can’t block CBD products — and that consumers clearly want them.

“People are using these products,” Hahn told the audience. “We’re not going to be able to say you can’t use these products. It’s a fool’s game to try to even approach that.”

Commissioner Hahn noted the FDA acknowledges potential “value” in CBD products but wants to provide consumers with the most accurate information as the market grows.

Also this week, the United States Department of Agriculture (USDA) updated its hemp guidance to temporarily remove the requirement that hemp testing labs register with the Drug Enforcement Agency (DEA.) That stipulation was part of the USDA’s interim final rule published in October, after which industry advocates noted that that DEA involvement would delay the market’s growth. Indeed, the USDA has since received complaints from state governments, farmers and hemp businesses.

“We now better understand how the limited number of DEA-registered labs will hinder testing,” the statement notes. “And [we] better understand the associated costs with disposing of product that contains over 0.3% THC could make entering the hemp market too risky.”

Moving forward, hemp testing can be conducted by labs that are not yet DEA-approved until the ﬁnal rule is published, or Oct. 31, 2021, whichever comes ﬁrst, the statement notes. This should provide more time for labs to submit applications, which the DEA will evaluate in accordance with the Controlled Substances Act.

“Women currently drive 70-80% of all consumer purchasing,” Cassie Nielsen, VP of talent at VMG Partners, said in a release. “Without immediately addressing diversity and inclusion in our boards and leadership, our companies and industries will not meet the needs of our consumers and drive the innovation and fact-based decision making needed to drive growth and profitability in this evolving marketplace.”

The effort has received an “outpouring of support” so far, said Sheryl O’Loughlin, the WOB Project’s co-founder and co-chair (former CEO of REBBL and Clif Bar and co-founder of Plum Organics). Other board members include Alex Hanifin, VP of marketing for better-for-you chip brand The Good Crisp Company; Kara Cissell-Roell, general partner at VMG Partners; and Mita Mallick, Unilever’s head of diversity and cross cultural marketing.

After last week’s announcement of its plans to acquire frozen vegetable brand Farmwise, food company B&G this week reported its fourth quarter and full 2019 earnings. The company, which owns frozen vegetable brand Green Giant, saw net sales increase 2.6% year-over-year to reach $470.2 million during the quarter and $1.7 billion during 2019. Net income was $10.3 million and $76.4 million for the quarter and full year, respectively, with a $25.2 million boost coming from its acquisition of flour brand Clabber Girl in May.

B&G’s second largest banner, Mexican-inspired brand Ortega will receive a touch of cauliflower as well. Ortega, bought by B&G in 2003 will launch a new line of Cauliflower Taco Shells and Cauliflower Tortillas, each made with over 25% cauliflower. The brand will also release a line of street taco-inspired sauces.

“Performance reflects rapidly increasing awareness among consumers around the benefits of plant-based meats,” Brown said during an investor call.

In the fourth quarter, net revenues increased 212% year-over-year to $98.5 million, bringing net revenues to $298 million for 2019, a 239% year-over-year increase. In U.S. retail, the brand generated velocity growth of 106% and grew 26 times faster than competitors in the conventional multi-outlet (MULO) channel for the 52-week period ending December 29, 2019, according to data firm SPINS. Beyond Meat’s products are sold at approximately 77,000 retail and foodservice locations, including Walmart and Whole Foods Market.

Additionally, Starbucks will debut a breakfast sandwich using Beyond Sausage in Canada next week, while Canadian coffee chain Tim Horton’s recently removed a similar product from its menu. But Beyond Meat has boosted breakfast sales at Dunkin Donuts, and is further working with KFC to roll out Beyond Fried Chicken nationally.

Beyond Meat executive chairman Seth Goldman also announced his resignation during the call. In November, Goldman left beverage company Honest Tea to focus on Beyond Meat, but noted the company is in good hands.

“This is just a matter of me having such confidence in the team,” Goldman said. “Frankly 18 months ago, we didn’t have the caliber of leadership we have to support Ethan and now we do — I’m absolutely going to continue to be engaged.”

Although Beyond Meat and rival Impossible Foods often dominate plant-based headlines, other smaller entrants and big CPG companies are seeking a bite: just this week global food and agriculture company Cargill announced plans to launch its own private-label plant-based patties and ground meat in April. 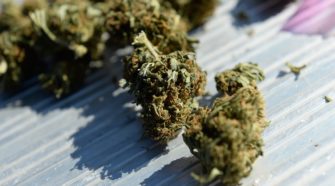