County residents are encouraged to attend a public hearing this Tuesday, March 10 at 1:30 p.m. on a proposed ordinance that would pave the way for industrial hemp production in Siskiyou County. The hearing, which will be held at the Commissioners‚Äô Chambers in Siskiyou County Courthouse, 311 Fourth Street, Yreka, will allow for continued public input before a final hemp ordinance is adopted.

In December 2018, President Donald Trump signed the 2018 Farm Bill into law, which removed hemp from Schedule 1 of the federal Controlled Substances Act. Since then, the State of California has been trying to bring state law into compliance with the federal regulations. At the county level, a moratorium on hemp cultivation has been in place since December 2018, while planners and commissioners grapple with how to implement these new federal and state laws at the local level.

‚ÄúWith these recommendations, we looked at other rural counties to see what they had proposed and adopted.‚Äù

Skierski and the other county planners reviewed ordinances in Imperial, Monterey, and San Joaquin Counties. Siskiyou County‚Äôs proposed ordinance closely follows that of San Joaquin with some additional restrictions. San Joaquin and Monterey have adopted their ordinances.

‚ÄúOur plan calls for a slightly stricter setback from residential areas (1,000 feet),‚Äù said Skierski. He added that, with the requirements for proper signage, 40-acre parcel restrictions, and other proposed restrictions limiting light pollution, the proposed ordinance would give county farmers a path to cultivate hemp on their land.

‚ÄúWe have had numerous public meetings with minimal input,‚Äù Skierski said. ‚ÄúSome farmers voiced concern over the 40-acre parcel size being too large, but we have followed the board‚Äôs recommendations.‚Äù

The Planning Board‚Äôs recommendations include confining industrial hemp cultivation to parcels 40-acres or larger, a ban on indoor hemp cultivation, a provision requiring clear signage distinguishing hemp cultivation from unpermitted cannabis cultivation, and an exemption from further environmental review under the California Environmental Quality Act. Potential hemp farmers would also have to obtain a license from the agricultural commissioner, would be required to keep plantings away from schools and residential zones, and would need to be re-licensed on an annual basis.

Hemp has a long history of cultivation in the United States dating back to colonial times and is seeing a resurgence due to its de-listing from Schedule I of the federal CSA. Hemp has the same genetic makeup as cannabis, but its uses extend far beyond those of cannabis. It can be processed into rope, clothing, paper, food, fiber, fodder, medicine, and numerous other products. With the passage of the 2018 Farm Bill, the U.S. Department of Agriculture predicts sales could increase to as much as $25 million this year and to over $100 million by 2022.

The proposed industrial hemp ordinance and the planning commission‚Äôs recommendations can be viewed and downloaded through the Siskiyou County website, www.co.siskiyou.ca.us. 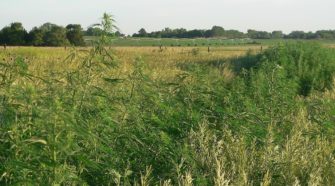