ARM’S LENGTH—The Ventura County Board of Supervisors will vote in January to designate a buffer zone that would eliminate hemp fields in areas that caused the largest number of complaints, including one in the Tierra Rejada Valley in Moorpark and one near Leisure Village in Camarillo. Residents reported that the strong smell coming from hemp fields affected their health and their quality of life.

In response to complaints from residents about the pungent smell of the crop, the board of supervisors has directed its staff to draft an urgency ordinance that would require industrial hemp farms to be at least half a mile away from city limits and sensitive sites like schools.

The buffer zone would eliminate fields in areas that caused the largest number of complaints, including one in the Tierra Rejada Valley in Moorpark and one near Leisure Village in Camarillo.

The board is expected to vote on the ordinance at its Jan. 14 meeting.

“I do recognize that when you get an odor that is new and is as strong as the hemp odor can be (that) it is debilitating for some people,” said District 1 Supervisor Steve Bennett, who represents Ventura, Ojai and the surrounding areas. “One of our commitments is to try to protect the quality of life (of residents) and at the same time try to keep ag as profitable as possible in Ventura County.”

The supervisors also directed staff to create a non-urgency ordinance— one that wil l require additional review from the county’s planning commission— to determine a planting window for the crop as well as exceptions to the buffer zones.

County staff said allowances could be made for hemp grown near city limits when, for example, the crop is placed inside greenhouses equipped with filtration systems.

The second ordinance will be reviewed sometime in early 2020.

Although the county is looking at various mitigation measures, it will not be able to prohibit new growers from registering to plant industrial hemp. The potential action was one the supervisors asked staff to look into at their Nov. 19 meeting.

County lawyers said temporarily banning new registrants in the county would be against the law, as officials do not have the authority to deny or suspend applications if they follow state law.

This is because the 2018 federal Farm Bill separated hemp from marijuana and defined hemp as an agricultural commodity. The plant can be legally grown by farmers who apply for a license, pay a fee and ensure their crops have less than 0.3% THC, the psychoactive chemical in marijuana.

This year, the county allowed 47 registrants to grow 3,600 acres of hemp on 110 sites, making Ventura County one of the state’s top five county producers of hemp.

With its proposed restrictions, the supervisors said they wanted to give residents a respite from the skunk-like smell while allowing farmers to grow the profitable crop.

Their decision was met with apprehension and opposition.

Fifty people spoke on the matter, with some asking the board to completely ban the crop, while others asked the county reps to consider the financial challenges farmers face.

“ This is a very complex business, and it’s very difficult to hit a home run the first year out of the gate,” said Will Terry, a fifth-generation farmer who is president of the board of directors of the Farm Bureau of Ventura County. “I don’t think taking away a farmer’s right to farm right out of the gate is the message you want to send to them. I think we want to send the message that we are willing to work collaboratively and look at the technology necessary to mitigate the issue.”

“I think there are solutions out there,” said Dan Hultgen, a resident of Ventura. “There are strains in production that don’t have the smell, so we need to look at everything before we have a knee jerk and shut everything off.”

Some residents said that hemp fields’ proximity to residences and schools, as well as the crop’s lingering smell, caused them to become ill or to not feel comfortable in their homes.

“No one is against farming or agriculture. . . . This is about the extreme odor being emitted from the farms year-round,” said Mark Van Dam, a Moorpark resident and former City Council member. “No one wants to outright prohibit hemp. All we want is that the county determines areas that are appropriate for farmers to grow their crop safely and productively.”

Next Out With Cows, In With Hemp: Kimball Brook Farm Announces Change Of Direction - Vermont Public Radio

Cannabis Yoga: The Best Strains for Each Style 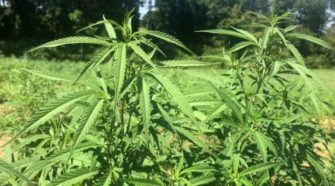