First, a clarification – full spectrum hemp oil should not be confused with hemp seed oil – they are completely different products. Full spectrum hemp oil is a whole plant extract. While hemp has very low levels of the intoxicating cannabinoid THC (and legally, it must have less than 0.3 percent THC in the USA, otherwise it’s considered marijuana), it can have high levels of other cannabinoids such as cannabidiol, plus various terpenes.

“Cannabis plants with low THC are still psychoactive, but tend to result in less psychedelic experiences, while still offering profound and often immediate relief from symptoms such as pain, anxiety, and depression,” according to Dr. Jacob Miguel Vigil, associate professor in the UNM Psychology Department and one of the researchers involved in the study.

“Hemp plants contain numerous therapeutic constituents that likely contribute to analgesic responses, including terpenes and flavonoids, which in theory, work together like members of a symphony, often described as the entourage effect,” said Jegason P. Diviant, one of the researchers.

The researchers point out that full spectrum hemp oil could provide a relatively safe alternative option for treating chronic pain compared to the use of opioids, which they say is the third leading cause of death in the U.S

The study’s findings have been published in the journal Life. UNM’s article on the findings and some of the researchers’ comments seemed a bit hypey (which was a little odd), but it’s all still interesting stuff.

Neuropathic pain is usually chronic and caused by progressive nerve disease such as multiple sclerosis; but it can also occur as the result of injury or infection. 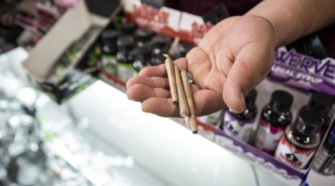