A sign warning people of surveillance and that the hemp planted is not marijuana at L & J Valley Farms near Gervais, Oregon on Oct. 23, 2019. (Photo: ANNA REED / STATESMAN JOURNAL)

Some tribes in South Dakota are laying the groundwork for residents to begin growing hemp in the next year.

The 2018 Farm Bill allows tribes to implement their own hemp programs separate from the states. While Gov. Kristi Noem and the Legislature continue their stalemate over legalizing hemp, tribes in South Dakota have been moving quickly to adopt hemp ordinances, create committees to oversee their hemp programs and submit hemp plans to the U.S. Department of Agriculture for approval.

The Flandreau Santee Sioux and Oglala Sioux tribes have already submitted their hemp plans to the USDA. The Sisseton-Wahpeton Sioux Tribe grew a hemp crop on the North Dakota side of its reservation this year for the second consecutive year and held a “hemp field day” in September to provide hemp education. Dozens of tribes, including several in South Dakota, formed a coalition to collaborate on writing hemp ordinances and hemp plans to submit to the USDA for approval.

Some tribes, such as the Cheyenne River Sioux Tribe, are still educating themselves about hemp and haven’t yet formally voted on creating a hemp program.

Agriculture-based economies want a diversity of crops and hemp offers another option for farmers, said Heather Dawn Thompson, the attorney working with the coalition. Hemp is a hardy crop that grows well on the Northern Plains region, and it is a “healthy crop” that doesn’t require a lot of maintenance or pesticides, which benefits the environment, she said.

“It’s a nice cultural match for a lot of tribal nations,” she said.

With the state’s hemp legalization still a question mark, the Rosebud Sioux Tribe sees an opportunity to become hemp leaders in South Dakota.

“RST has the opportunity to be, at least, approximately one year ahead of the state of South Dakota with its hemp legalization and production efforts,” said Michael LaPointe, economic development specialist at the tribe’s business department, the Rosebud Economic Development Corporation.

Rosebud has about 100,000 potential acres for hemp, and, considering cost and profit estimates for hemp, the tribe has a profit potential of $25 million from the crop, he said. Looking ahead to a long-term goal, the tribe could ideally have a processing facility where hemp could be turned into textiles, clothing, insulation, paper, “Hempcrete,” particle board, and auto and boat parts.

“This has the potential to allow RST, and individual RST members, to have additional financial resources to reinvest into economic development projects, create jobs, increase tax revenues and fund critical government functions for some of the poorest people in the state,” he said.

More: Why S.D. lawmakers are bracing to fight Gov. Kristi Noem on hemp

Rosebud has a zero-tolerance drug policy on the reservation because of the meth epidemic, and the first step was to pass a code decriminalizing hemp, explained Buster Isennock, marketing director at REDCO. Once all of the regulations are in place, “the real work begins,” he said.

A 400-acre plot, managed by REDCO and certified organic, will be the tribe’s starting point to learn to grow hemp.

“We have really big dreams. We’ve got a lot of land. We have the ability to do this on a larger scale,” Isennock said.

Hemp provides a new market for a land-based tribe such as Rosebud. REDCO’s focus is on entrepreneurship, and hemp is an emerging market that can accomplish economic self-sufficiency and increase jobs, he said. The hemp industry is still building up at this point, but he believes hemp will be a mainstream product 20 years from now.

Hemp’s appeal to a younger generation can also give the tribe a tool to increase interest in farming among young people, he said.

It’s not a bad thing that the state is taking its time to legalize hemp, he said. If the state takes a year or two to get its hemp program up and running, the tribes can serve as a partner for South Dakota farmers interested in growing hemp, Isennock said.

“If we can … at least get our foot in the door, then that gives us a leg up on the hemp economy within South Dakota, and I think that’s where we want to be,” he said. “Hemp is not a bad plant. We want to use this plant to further our goals of economic sustainability, putting our land to good use.”

Next HEMP Toilet Paper could be a Game Changer - RADIO.COM 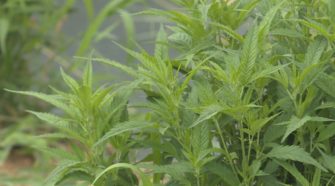