Seven months after Sonoma County supervisors narrowly approved a ban on commercial hemp cultivation, the crop looks poised for a reset, with planning commissioners voting Thursday to recommend a new governing framework that would allow cultivation to move forward.

The Planning Commission voted 4-1 to advance rules favored by hemp advocates to supervisors, who will decide during a Dec. 16 meeting whether the rules are sufficient to reverse a ban they put in place April 2.

Sonoma County Supervisor James Gore, who along with Supervisor Lynda Hopkins led the charge last year in enacting the moratorium, said the proposal represented the kind of effort that the board had sought — a monthslong process to establish sound rules for a new crop. The moratorium, Gore said, bought the county time beyond the green light given in the 2018 Farm Bill, which legalized hemp.

The ordinance outlines areas where hemp cultivation will be allowed — within each of three agriculture-specific zones, as well as the county’s agriculture and residential zone and its resources and rural development zone, each of which favor agriculture as a permitted use. Other provisions include registration of cultivation sites, testing and setbacks from neighboring properties.

The measures are less restrictive than those adopted by the county for commercial cannabis, a close cousin of hemp that looks and smells quite similar.

The key difference is that hemp, by legal definition, has only trace amounts of the intoxicant tetrahydrocannabinol, or THC. Instead, the plant’s commercial promise lies in cannabidiol, or CBD, a compound already in wide use as a nonprescription remedy for chronic pain, anxiety, acne, insomnia and other conditions. CBD can be extracted from female hemp plants.

“I think the ordinance strikes a good balance between the neighbors’ concerns, the cannabis industry’s concerns, as well as the government’s concerns as it relates to the environment,” said Erich Pearson, founder of the SPARC dispensary network and a co-founder of the Cannabis Business Association of Sonoma County.

The Planning Commission required setbacks of 600 feet from occupied structures and 200 feet from property lines. It prohibited hemp cultivation in rural residential zones.

Linegar, who endorsed the ban in April, presented the proposed ordinance Thursday, and highlighted the need to diversify the county’s agricultural base. He gave a full-throated defense of the county’s Right to Farm Ordinance, which renders moot most complaints about agriculture-related noise, smells and side effects.

“We get people moving in, building mansions, not using the land for agriculture, and then complaining,” Linegar said. “I’m very disturbed by this. If we allow people to do this, we are eroding our right to farm.”

Some residents sought to stop hemp before it could begin, raising concerns about water use, crime, smell and plunging property values. Advocates, meanwhile, extolled the virtues of hemp as the potential cure for global warming, pointing to its ability to draw carbon out of the atmosphere and replace products made from fossil fuels.

Next The legality of hemp oil products with American Shaman - KSHB 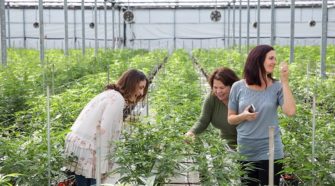