BASOM — Brad Mills of the Mills Family Farm in Basom sees an opportunity for CBD and industrial hemp.

On Monday, students in Pete Bueler’s Participation in Government and AP History class were putting together a digital board showing their U.S. Senator and Minority Leader is Charles Schumer.

One day later, the students were learning about the benefits of industrial hemp as the classroom moved to Mills Family Farm in Basom and the instructor was none other than Sen. Schumer.

The students at first stayed in a close group, but then started moving toward the plants, taking photos and touching them to see if it was real. Mills said not only was he pleased to see that, he was pleased Schumer discussed the benefits of his crops and is working on clearing up the stigmas concerning hemp.

“The profit margin on CBD and hemp is very high, eventually the market is going to plateau and then what is next?” said Mills. “We want to expand this now while the prices are high. Even though it’s lucrative and more efficient than corn and wheat, there are a lot of start-up costs. We need help with finances.

“We do want to expand a little. Being a small farm, the idea is to get a processing license and maintain the small crops we have now, and process it ourselves and keep that money rather than paying it out to other (facilities),” he added.

Right now, the gross of industrial hemp is about $60,000 for the 2,000 plants, Mills said. However, he added they have to pay licensing fees, taxes and they have to finance for better equipment. Then, he needs the money to invest the following year. He has about an acre and said if you plant 100 to 200 acres, you could make more money.

“We did have his ear. We want to apply for a research grant and a letter from Sen. Schumer would be great and maybe help expedite that process,” said Mills. “If marijuana legalization happens, we want to know how to move forward legally. Show we do great work and we can be trusted.”

Schumer talked to the students about their college plans and Buffalo Bills quarterback Josh Allen. But there was more.

“When Sen. Schumer went over there, he explained the potential and all the good things hemp can do for the economy, there are so many uses including in vehicles and I don’t think the kids knew that,” said Mills. “It’s marijuana’s brother that does not have psychoactive side affects. That was the most impactful thing of the day. It’s ok, no horror stories.”

Bueler said, “To see all the governments working together in real life is phenomenal. To see a bipartisan compromise, with the minority leader (Schumer) and Sen. Mitch McConnell is tremendous … governments can work together. This is huge for us. These are new solutions and new ideas for the economy. The administration (at Oakfield-Alabama) gave it the OK (to attend the press conference in the field). For the school, it’s not about the issue, it’s about seeing what is out there, see the parties involved and to have the minority leader here, to have Brad here, a fellow Oakfield-Alabama graduate.”

Christian Yunker, president of the Genesee County Farm Bureau used the opportunity to ask Schumer a few questions as well.

Mills was joined by his sisters, Kerry and Kim Mills and mother Toni Mills. The farm is a four-generation farm, owned by their uncle, Robert Mills. Brad Mills’ father, George Mills Jr. also works on the farm, and his grandfather, George Mills, also worked on the family farm.

Schumer said he was in Genesee County to launch a new push to iron out a thorny issue for the burgeoning industrial hemp industry in Upstate New York. He said despite laws, “financial institutions have continued to question whether or not they can extend their services and products to industrial hemp-oriented businesses and farms even though it is fully legal.”

Schumer said that without access to traditional financial services, local farmers and the industrial hemp industry Upstate and in Genesee County is being unfairly restricted, preventing further economic growth and the creation of good-paying jobs and choking off valuable income for farmers.

“The industrial hemp industry is seeding and growing all over Upstate New York, with prospective hemp businesses like the Mills Family Farms popping up left and right, which is why I fought so hard to strip the burdensome and outdated federal regulations from it by passing the Hemp Farming Act of 2018,” said Schumer. “However, if these businesses aren’t able to get financing from a bank or find a credit card processor that doesn’t charge them an arm and a leg, none of that matters all that much.

“If the financial institutions aren’t given updated guidance by the major federal financial regulators clarifying the legality of industrial hemp, the industry in Western New York and the Finger Lakes Region and producers like 4th generation Genesee County farmer Brad Mills will continue being tightly bound, prevented from growing and creating the good-paying jobs they’d otherwise be able to,” Schumer continued. “That’s why I’m urging the FDIC, Federal Reserve and OCC to issue updated guidance to the financial institutions looking to provide services to industrial hemp-oriented businesses as soon as possible, to help growers, producers and industry harvest the massive potential of this versatile crop.”

Schumer said in a press release that since the 2018 Farm Bill removed the federal regulatory shackles from industrial hemp production, manufacturing, and selling, New York’s industrial hemp industry has started to grow significantly, with new farms and businesses emerging and existing ones expanding operations. This has brought considerably more good-paying jobs and revenue to Upstate New York, making industrial hemp a critical new part of the state’s agricultural future. For example, Canopy Growth recently held a ground breaking celebration for its new industrial hemp industrial park in Broome County, which will bring 400 new jobs to the region, with the potential for many more industrial hemp-oriented businesses to locate to the region. That being said, as industrial hemp farmers and businesses are exploring the full benefits of the 2018 Farm Bill, they have experienced serious difficulty accessing financial products with regulatory uncertainty at financial institutions. While some companies have agreed to offer financial services to the growing hemp industry, many have not due to confusion over the crop’s legal status.

The press release continued, while the enactment of the 2018 Farm Bill did legalize the production and sale of industrial hemp at the federal level, many financial institutions are still uncertain if they can extend services and products to related businesses. Without consistent access to these traditional financial services, such as checking accounts and credit, many industrial hemp businesses have faced difficulty expanding beyond their basic business operations. Small businesses and new entrants are hit hardest by these regulatory uncertainties.

Schumer pointed to Mills Farms Family Farm in Basom as the perfect example of an industrial hemp business brimming with potential that’s being tightly bound by the lack of regulatory clarity. Schumer explained that “4th generation farmer Brad Mills is growing hemp this year at his farm, partnering with the local company East Coast Growth to produce hemp to sell for commercial use. However, due to the lack of access to traditional financing, Brad has had to fund thousands of dollars in upfront costs himself this year. Furthermore, even though he has plans to further expand his operations, they will be stymied if the lack of access to bank financing continues. Additionally, East Coast Growth says that the lack of traditional financing is a major impediment to the entire hemp industry pipeline. The company operates in the middle of the industrial hemp supply chain, finding growers and matching them with producers who will purchase the crop. East Coast Growth says that besides the lack of financing for growers, the few producers in New York State have also struggled to secure bank financing, lines of credit, or to even use credit cards for sales or transactions.”

Additionally, the lack of access to financial products not only affects the hemp businesses, but its employees as well. Schumer said his office has heard stories from employees of hemp businesses being unable to access private loans due to the nature of their employment.

Schumer explained that in order to alleviate these concerns, updated guidance would better help financial institutions assess risk and make available a wider range of financial products to industrial hemp cultivators and manufacturers. It is critical that industrial hemp farmers and businesses have access to the financial resources they need to keep their business running successfully and industrial hemp a part of New York Agriculture. Therefore, Schumer called on the Federal Reserve, FDIC, and OCC to provide guidance and best practices to the financial institutions under their authority that are looking to serve hemp farmers and businesses, to allow them to recognize hemp as a legal agricultural commodity as it was set forth in the 2018 Farm Bill.

Brad Mills with Mills Family Farm said, “We planted our first-ever hemp crop this year but had to fund the thousands in upfront costs ourselves. As a 4th generation farmer looking for new opportunities to grow our family farm, we hope to expand our operation next year but know that access to financing will be an impediment. Expanding our operation means purchasing new equipment like $8000410,000 drying equipment and thousands more for plant seedlings, irrigation, fertilizer, and more. So we appreciate Senator Schumer’s efforts to unfreeze lending so hemp growers like us can benefit from this new cash crop.”

Jason Klimek with East Coast Growth said, “The hemp industry is poised to take off in New York but the lack of access to traditional financing continues to be a problem. It impacts the entire supply chain from growers who can’t get a bank loan, to processors in need of lines of credit, to retailers unable to let customers use credit cards for payment. We applaud Senator Schumer’s efforts because banks are interested to lend and eager to invest in this industry, but need assurances and guidance from federal regulators in order to act.”

The Schumer-backed Hemp Farming Act of 2018 was introduced by Majority Leader Mitch McConnell (R-KY), Sens. Rand Paul (R-KY), Jeff Merkley (D-OR) and Ron Wyden (D-OR). It passed and was signed into law as part of the 2018 Farm Bill. This legislation:

• Removes industrial hemp from Schedule 1 of the Controlled Substances Act • Empowers states to be the principal regulators of hemp • Allows hemp researchers to apply for competitive grants from the U.S. Department of Agriculture (USDA); and makes hemp farmers eligible to apply for crop insurance

Industrial hemp is a type of cannabis plant that is grown largely for industrial uses, but it can also be utilized for food, oil, and cosmetic products. Hemp contains a very small amount, typically between 0.2 and 0.3 percent of tetrahydrocannabinol (THC), and while from the same species of plant as marijuana, it has varied widely in use. However, due to the existence of THC in hemp, Schumer explained, both plants were considered “controlled substances” under federal law, meaning the U.S. Drug Enforcement Administration (DEA) was the primary regulator for hemp production. Schumer argued that this narrow view has undermined the crop’s agricultural and economic potential. With the Hemp Farming Act of 2018 passed by Congress and signed into law last year, this unnecessary roadblock has been lifted, and industrial hemp’s significant potential to become a cash crop in Upstate New York will be unleashed. 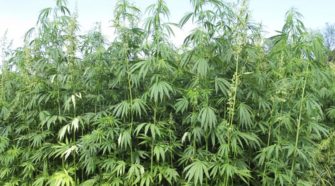