Senator Chuck Schumer says industrial hemp growers and processors in New York need easy access to capital to help them thrive to potentially create thousands of jobs in Central New York.  He visited a 100 acre hemp farm in Cortlandville today.  Schumer says despite his efforts that lead to the passage of the Hemp Farm Act in the last agriculture bill, farmers are struggling to get financial backing.

“While hemp has been legalized, a good number of financial institutions are reluctant to make loans and extend services to hemp oriented businesses.  But, I will be pushing the regulators to issue regulations and guidance, so that financial companies will be willing, eager and happy to make loans to this burgeoning industry.”

He says some banks are simply worried they might get sued by making loans to the hemp farmers and processors because they lack the proper guidance from the FDIC and other regulatory powers.  Allan Gandelman is the owner of Main Street Farms and New York Hemp Oil.  The first bank he worked with cancelled him as a client after six months.

“… and then after that, we went to 5 different banks who all said no, luckily a local credit union decided to kind of take a risk and bank with us and they’ve been amazing.  We grow the hemp, process it and then we sell our products online.  About 2 or 3 months ago, all of the credit card processors shut us down and we weren’t allowed to sell our products online, costing us a lot of money in lost revenues.”

Gandelman’s hemp product with CBD oil is called Head and Heal and is sold in grocery stores.  Schumer plans to ask the FDIC and the Office of the Comptroller of Currency to make it clear to lending institutions that providing banking services to the hemp industry is legal. 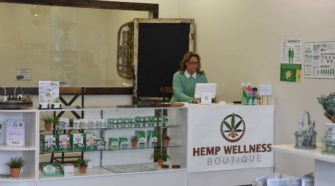