Santa Barbara County’s cannabis licensing and permitting process is picking up steam, but officials hope to convince operators to submit applications in order to avoid finding themselves out of compliance with state and county laws.

That was one of the main points in the first quarterly update on the county’s cannabis regulatory process, enforcement actions and tax revenues delivered Tuesday to the Board of Supervisors by Dennis Bozanich, deputy county executive officer.

Enforcement operations have resulted in more than half a dozen notices of violation, one arrest and the eradication of hundreds of thousands of illegally grown cannabis plants, according to the report.

The first round of tax payments brought the county nearly $2 million, but officials believe the next quarterly payments could be higher as a result of the harvest that’s still underway.

“County land use permits have begun to flow through the system,” Bozanich told supervisors, noting that since the county’s cannabis regulations became effective in the inland unincorporated areas in June, the county has issued two permits.

One of those is for an outdoor cultivation operation in Los Alamos; the other is for an indoor nursery in Goleta.

Both operators were issued paper applications for business licenses, but the county expects to have the online application process in operation by the end of the year.

Supervisors required state and federal background checks through Livescan for cannabis business licenses, but Bozanich said the board would have to approve a resolution, which it did Tuesday, to put that into effect.

Planning and Development Department staff has also received five applications for conditional use permits, 11 for land use permits and two for development plans.

But county planners have also conducted 36 consultations with cannabis operators, with about 23 of those involving Carpinteria cultivators in the Coastal Zone, where the cannabis regulations couldn’t be implemented until they were certified by the Coastal Commission.

Planner consultations were offered by the county as a way for Coastal Zone cannabis operators to start the permitting process and maintain their temporary cannabis licenses while waiting for the regulations to take effect.

“We would expect approximately 30 of these consults would be converted into land use permits, coastal zoning permits in the days and weeks ahead,” Bozanich said.

Enforcement has been a major component of the staff’s efforts over the past few months, Bozanich said.

The Sheriff’s Office had led the enforcement actions that has involved staff from the Agricultural Commissioner’s Office, Planning and Development and Environmental Health departments and the District Attorney’s Office as well as state partners Cal Cannabis and Department of Fish & Wildlife.

“As of Oct. 31, the sheriff’s staff has initiated 10 enforcement actions against unlicensed cannabis operators,” Bozanich said.

Those led to one arrest and the destruction of more than 417,700 plants worth an estimated $88.9 million on the illegal market, Bozanich said.

Fourth District Supervisor Peter Adam asked what the arrest was for.

“It was actually for perjury,” Bozanich responded. “They had signed the affidavit and sworn on that stack of Bibles, and it came out that wasn’t an accurate reflection of what was on the ground.”

That prompted Board Chairman and 1st District Supervisor Das Williams to comment, “So there’s actual accountability in our planning processes. Wow.”

“Most of those violations are the result of operators not having valid state licenses or for the use of lights and hoops,” he said.

Odor control requirements in the Coastal Zone have not taken effect yet because those are part of the permitting process that requires an odor abatement plan.

“There’s really an imperative for us to move quickly on these odor abatement plans in the AG-1 zones,” Bozanich told the board. “The residents, the neighbors have been patient.

“Since I started on this back two years ago, they’ve been extremely patient, and I think we have a shortening window of time when that patience can continue to be asked for – and we’ll see that patience back from neighbors, but I think that window is closing fairly quickly,” he said.

Bozanich said it’s really dependent on cannabis operators applying for coastal development permits, which will have that requirement attached, and how fast the county can process the permits.

In response to a question from Williams, Bozanich said unpermittable outdoor operations in those areas will have to shut down when their state temporary licenses run out Dec. 31 or the end of the first quarter of 2019.

But he noted the board adopted an amortization period that will end June 15, 2019.

“That will really be the drop-dead date,” he said, but added it would be hard to imagine any operations would still be in existence after the end of the first quarter.

As for tax revenues, Bozanich said 96 temporarily licensed operators who were potentially taxpayers were reported to the Treasurer-Tax Collector’s Office for the first quarter of operations.

Altogether, 30 operators paid cannabis taxes that totaled $1.82 million for the first quarter of the fiscal year, while 41 reported no gross receipts and 30 did not file a report.

But he noted it wasn’t surprising 41 operators didn’t have gross receipts during the quarter because 75 percent of the cultivators in the county are growing outdoors, and a lot of those are harvesting their crop last month and this month.

So it wouldn’t be surprising if the tax revenues for the current quarter are significantly higher because that cannabis will have moved into the marketplace.

While 1,289 state temporary licenses had been issued in the county as of July, with 1,286 of those active and 315 acres being cultivated on 106 parcels, most of those numbers have dropped as of October.

The number of licenses climbed to 1,437, but the number of those active fell to 832, and only 196 acres were being cultivated on 77 parcels.

“I think a lot of cultivators sought and initially received those temporary licenses because they were free and easy to get,” Bozanich said.

But in June, the state began requiring more documentation, including premises maps, authorization from the Central Coast Regional Water Quality Control Board and stream diversion agreements from the Department of Fish & Wildlife.

Initially, cultivators also had more licenses than the amount of land they were growing on, so they’ve allowed those licenses to expire, Bozanich said.

He noted only two full annual licenses have been issued in the entire state because of the extensive process for the required track-and trace program.

No one has applied for a testing license in the county, and Bozanich said it’s likely because testing facilities are restricted to commercial and industrial zones, and there aren’t that many sites in those zones in the unincorporated area. 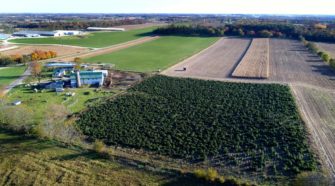