PALM BEACH, Florida, May 14, 2019 /PRNewswire/ — A couple of recent articles painted a rosy picture for hemp cultivation in the next few years. An article on Marijuana Moment said: “Industrial hemp production significantly increased in the U.S. in 2018, with farmers cultivating three times as many acres of the crop as compared to the previous year. Farmers grew more than 78,000 acres of legal hemp last year, the advocacy group VoteHemp reported. In 2017, they grew about 26,000 acres and in 2016, the total was just under 10,000 acres‚Ä¶ But while those are impressive gains‚ÄĒthe product of a growing number of state-level reform policies that expanded the pool of farmers licensed to grow hemp‚Ä¶ expect another massive surge in 2019 thanks to hemp’s outright legalization through the new Farm Bill‚Ä¶ The legislation is a game-changer in terms of production estimates, advocates say.  And it’s not just California and Colorado and the western states that are getting into the picture. An article focusing on northeastern U.S said: “Other owners of tens of thousands of acres of preserved agricultural land are betting on a bill that’s working its way through the state Legislature that will allow them to join a business that’s expected to be worth $22 billion by 2022. The demand for CBD products is exploding. At the moment the demand is far outpacing the supply,” said Heather Darby, a hemp expert at the University of Vermont Extension who has advised agricultural officials and prospective hemp cultivators in Massachusetts. “Farmers and businesses are scaling up production quickly and moving from producing an acre to producing 50 acres‚Ä¶ About 1,500 to 2,000 hemp plants can be grown per acre generating between $40,000 and $50,000, according to information provided by Brightfield Group, a Chicago-based cannabis research firm.     Active Companies from around the market with current developments this week include:  Marijuana Company of America, Inc. (OTC:MCOA), VIVO Cannabis Inc. (TSX-V: VIVO) (OTC: VVCIF), MariMed Inc. (OTC: MRMD), Kona Gold Solutions, Inc. (OTC: KGKG), Terra Tech Corp. (OTC: TRTC).

“It’s hard to say what’s going to happen. Right now, it’s an open market. People are trying to work as fast as possible to meet that high demand,” said an industry exert. “People think there’s a lot of money to be made … big profits. That may be true, but you have to have a crop to be able to obtain a profit.”  The Marijuana Moment article concluded: “”Sales of hemp products have been growing at a double digit pace for several years and demand for CBD has been phenomenal‚Ä¶ Now that hemp has been removed from the Controlled Substances Act, we expect demand for American hemp to continue to increase and project that at least 125,000 acres of hemp will be planted nationally in 2019‚Ä¶. the end of hemp prohibition means “it’s time to invest our energy in expanding hemp cultivation and the market for hemp products across the country so that all can reap the benefits of this versatile, historic American crop.”

Through the agreement, Marijuana Company of America will provide hemp seeds, genetics, management of operations and standard operating procedures. Essence, a cultivator and land owner, will provide all necessary licenses for the legally compliant growth and sale of hemp in Riverside, California.

“MCOA strives to be a leader in producing and distributing hemp, and we believe this joint venture will allow the Company to further its vision by establishing itself as a premier company in the hemp sector,” said Don Steinberg, Chief Executive Officer of Marijuana Company of America. “With the ongoing return of net profits this project is expected to provide MCOA, we are confident that signing this Letter of Intent is another strategic step for the Company and we look forward to expanding further in both the cannabis and hemp markets in California. If all goes according to plan, this will by far be the most financially successful venture the Company has been involved in.”

Marijuana Company of America will receive an 80% return of net profits for the JV on an ongoing basis, as well as a long-term lease on the property with favorable lease terms. The project includes up to 500 usable acres of land in California’s Riverside County that has sufficient water and power and is specifically suited for large-scale cultivation. The Company is in the process of sourcing the highest quality seeds that will yield a high percentage of CBD with legally compliant low levels of THC. It is projected that each acre will produce 2,500 pounds of hemp biomass. Based on prevailing fair market rates at this time, the biomass can be sold for approximately $35 a pound. If the Company processes the biomass as it intends to do, at least in part, the biomass will produce a significantly higher financial return. Additionally, the property is equipped with several large structures that are suitable for the storage and drying of the hemp plants. A highly experienced cultivation team has been engaged to manage the operations and cultivation of the farm.    Read this and more news for MCOA at:  https://www.financialnewsmedia.com/news-mcoa/

In the industry developments and happenings in the market this week include:

“We are very excited to bring our premium products to the Alberta consumer market, one of the strongest in Canada , and fill some of the current industry supply gaps while continuing to expand our distribution channels,” said Daniel Laflamme , President of Canna Farms. “Following Health Canada’s approval of our facility expansion, allowing us to double our current production capacity, we are eager to expand our customer base in Alberta , where the Canna Farms brand is well-known, and look forward to shipping to all Canadian provinces and territories in 2019 in connection with our production ramp-up.”

“To facilitate efficient shipping, we have invested in automated packaging and labelling equipment to address some of the downstream challenges faced by producers in getting their products to market,” added Brian McDonald , Vice-President of Canna Farms. “We are also actively working on developing different concentrates and edible products, and using automation to expedite the production process. Having Alberta as a long-term partner, and continuing to invest in premium quality indoor production, will help us to continue to differentiate Canna Farms as a true premium cannabis company and a market leader in quality and reliable supply.”

Financial Strength‚ÄďMariMed’s balance sheet continued to strengthen during the first quarter. Total assets, grew 17.6% during the quarter to $97.6 million, compared to $83.0 million at December 31, 2018. To help fund growth initiatives, the company raised $8.37 million in financing activities during the quarter, principally from sales of common stock and promissory notes.

Kona Gold Solutions, Inc. (OTCPK: KGKG), a hemp and CBD lifestyle brand focused on product development in the functional beverage sector, recently announced the sponsorship of World Ranked #1 professional skier, Ryan Dodd.  Ryan Dodd has signed a two-year agreement with Kona Gold where he will represent the brand’s Kona Gold Hemp Energy Drinks on a global level as he travels and competes in events around the world.

“Kona Gold is a leader and innovator in the functional beverage industry. We found it fitting to join forces and continue to raise the bar together setting the Gold Standard. I’m so excited for the future with this premier lifestyle brand,” stated Ryan Dodd.

Derek Peterson, Chief Executive Officer of Terra Tech, commented, “In the first quarter of 2019 we made meaningful headway both implementing our restructuring strategy and further entrenching ourselves in the California market. All material construction at the Hegenberger cultivation facility in Oakland is complete, and we anticipate it being fully operational upon receipt of licensing approval from the State. This will enable us to ramp production of our IVXX‚ĄĘ premium wholesale cannabis brand in California.”

“We also opened our newest Bl√ľm dispensary in San Leandro, California, a prominent suburb city of San Francisco and Oakland. In the short time since opening, the dispensary has generated consistent medical foot traffic and we expect sales at this location to continue to grow throughout the year, driven by the start of sales to adult users as of May 2019, and increased brand recognition in the area. Moreover, we are working on several growth initiatives that are expected to generate new sources of revenue for the Company, including opening a vertically integrated cannabis complex to host large-scale, cannabis themed events at our East Dyer Road location later this year,” continued Mr. Peterson.

DISCLAIMER:  FN Media Group LLC (FNM), which owns and operates Financialnewsmedia.com and MarketNewsUpdates.com, is a third party publisher and news dissemination service provider, which disseminates electronic information through multiple online media channels.  FNM is NOT affiliated in any manner with any company mentioned herein.  FNM and its affiliated companies are a news dissemination solutions provider and are NOT a registered broker/dealer/analyst/adviser, holds no investment licenses and may NOT sell, offer to sell or offer to buy any security.  FNM’s market updates, news alerts and corporate profiles are NOT a solicitation or recommendation to buy, sell or hold securities.  The material in this release is intended to be strictly informational and is NEVER to be construed or interpreted as research material.  All readers are strongly urged to perform research and due diligence on their own and consult a licensed financial professional before considering any level of investing in stocks.  All material included herein is republished content and details which were previously disseminated by the companies mentioned in this release.  FNM is not liable for any investment decisions by its readers or subscribers.  Investors are cautioned that they may lose all or a portion of their investment when investing in stocks.  For current services performed FNM expects to be compensated forty six hundred dollars for news coverage of the current press release issued by Marijuana Company of America, Inc. by a non-affiliated third party.  FNM HOLDS NO SHARES OF ANY COMPANY NAMED IN THIS RELEASE. 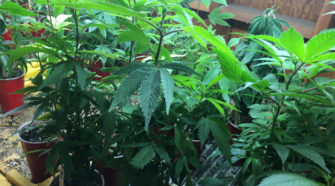