With the ongoing discussion about legalization of marijuana, the slang word for cannabis, “Hemp” has been unfortunately thrown into this argument. Mostly from individuals that don’t understand the difference between the two. The mindset of “It’s weed, it must be bad” is inaccurate.

The misconceptions of hemp are many, but the most common would be:

1. Hemp is the same as marijuana.

3. Hemp has no health benefits.

4. Hemp is just a food ingredient.

In all fairness, many believe hemp crops to be the first crops ever cultivated by mankind over 10,000 years ago. Known to be the strongest natural fiber in the world and to have over 50,000 different uses, it has been the basis for many crucial resources that we use today.

Hemp is classified as a variety of the cannabis plant. Due to only having a 0.3% THC (Tetrahydrocannabinol) content, it is not seen as an addictive drug like its cousin which can induce psychotropic or euphoric effect on the user. Hemp does not derive from the same plant as marijuana.

On Oct. 29, 2019, U.S. Secretary of Agriculture, Sonny Perdue, announced the establishment of a U.S. Domestic Hemp Production Program. The program, required by the 2018 Farm Bill, creates a consistent and regulatory framework around hemp production across the United States.

The 2018 Farm Bill, which was signed into law by President Donald Trump in December of 2018, defines hemp as the plant Cannabis sativa L. and any part of the plant with a delta-9 THC concentration of not more than 0.3% by dry weight.

The sales of hemp across the nation have increased from $820 million in 2017 to more than $1 billion in 2018. With the December 2018 Farm Bill mentioned above, and the USDA actively seeking additional funding resources to assist new hemp businesses, this industry is on its way to becoming a leader in agriculture.

Currently, the United States is producing the third most hemp in the world, behind Canada and China who is sitting on top and growing nearly 70% of the worlds hemp needs.

Nebraska has been hit with some major agricultural struggles over the past couple years, but expanding hemp crops across the state can be a great way to offset those. Hemp is grown in greenhouses allowing it to withstand weather changes. This in turn minimizes the possibility of losing crops and losing money.

I am not an advocate of legalizing marijuana, which more and more states seem to be doing each year. But in my opinion, hemp farms can do a lot of good for the economy by creating jobs across our agricultural industry.

To understand more about hemp and its difference to marijuana, go to medium.com. Hemp really is the good weed. 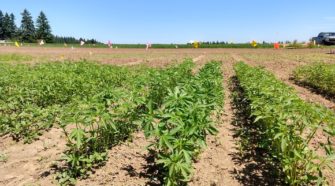