REDMOND — Processing industrial hemp will likely be legal in Redmond’s city limits by mid-October, which some city councilors say could bring more jobs and economic opportunity to the region.

The Redmond City Council voted 5-1 last week to amend city code to allow the production of hemp in Redmond, with councilor Jay Patrick the lone dissenting vote. The council will have a final vote Sept.10. The code amendments would take effect 30 days later.

According to a spokesperson from the U.S. Department of Agriculture, each state can decide for itself whether it can produce hemp and grow it in approved locations. Processing and growing hemp is legal in Oregon, according to the state department of agriculture, which regulates the crop.

USDA plans to create federal regulations for producing hemp by fall of 2019, according to the agency’s website. The 2018 Federal Farm Bill removed hemp from the list of Schedule 1 controlled substances, which are drugs that the federal government says have no accepted medical use and can easily be abused.

Patrick said he wants to wait until the federal regulations are in place before Redmond allows the processing of industrial hemp.

“If the feds are working on it, we should be postured when the time comes,” he said.

Industrial hemp consists of all non-seed parts of the cannabis plant, with a concentration of tetrahydrocannabinol, or THC — the psychoactive compound in marijuana — of less than 0.3%.

The proposed addition to Redmond’s city code specifies that the only areas where processing hemp will be allowed are those zoned as “heavy industrial,” which means it would only happen on the east side of U.S. Highway 97, north of the Redmond airport. The proposed code also states that odors from the hemp processing can’t be noticeable from the property line of the land it’s grown on.

Hemp has become a major cash generator in Oregon. The crop is projected to produce more than $1 billion in revenue in Oregon, and the state contained 20,278 acres of hemp farm by March. Deschutes County is the third-largest Oregon county for growing hemp, only behind Jackson and Josephine counties, as of March.

Industrial hemp is used in thousands of products containing CBD, or cannabidiol, which some claim can be used for treating a variety of ailments. It is also grown for fiber and other uses.

During a Redmond City Council work session June 18, Jon Stark, manager of economic-development non-profit Redmond Economic Development Inc., said other Central Oregon communities already have hemp processing plants, including Prineville and Bend. He also said that recently, a company wanted to use a 40,000-square-foot building as a hemp processing plant, and he had to turn them down, because the city didn’t allow it.

“The economic opportunity … is passing us by,” Stark said. “We think there could be a long-term play for this product being manufactured in communities like Redmond.”

“I believe that it’s happening, and we might as well move forward,” councilor Ginny McPherson said.

Councilor Camden King said he was worried that if Redmond doesn’t legalize industrial hemp processing, the city could lag behind other Central Oregon cities in providing decent-wage jobs.

“We’re hampering current businesses that would like to innovate and develop and capture market share early,” he said. “(Let’s) step on the gas.” 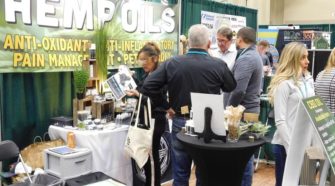