Owners of an Alturas citrus grove have switched to hemp. They are growing cannabis plants for Green Earth Cannaceuticals in partnership with Florida A&M through a state pilot project.

ALTURAS — In the middle of what’s still citrus territory, a clay road winds through active orange groves and past large bales of hay to reach a parcel that six months ago bore row after row of Valencia orange trees.

Now, though, the 30-acre property is covered with lines of bushy plants that aren’t even knee high — and the new crop might represent the future of agriculture in Polk County.

“By this time next year, there will be 250 acres of hemp,” said Henry Hooker, co-owner of Hook-R Farms. “That is our goal.”

Hook-R Farms ploughed down the orange trees this year and replaced them with hemp, a form of cannabis related to marijuana. The company, which Hooker co-owns with his sister, Deborah Hooker, a lawyer based in Okeechobee, has a contract to grow hemp for Green Earth Cannaceuticals.

That company, based in Alachua County, is one of two in Florida licensed to grow industrial hemp through a pilot project overseen by Florida A&M University and the University of Florida. Green Earth Cannaceuticals has a partnership with Florida A&M.

The company installed about 45,000 hemp plants at the Alturas property the first two days of August. Green Earth also is growing hemp at three sites in Alachua County and one near Tallahassee, Chief Operating Officer Scott Burgett said.

Burgett and two co-workers joined the Hookers on Friday morning to host a tour of the farm for about a dozen employees of the Florida Department of Agriculture and Consumer Affairs, a few citrus growers and others involved with the cannabis industry.

Cultivation of marijuana for medical use became legal in Florida following passage of a 2016 constitutional amendment. The state has so far issued more than 20 licenses, including one to GrowHealthy, which operates a facility in Lake Wales.

The marijuana grown for medical products is allowed to contain high levels of THC, the compound that produces a euphoric effect. By contrast, industrial hemp can contain no more than 0.3% THC.

The 2018 federal Farm Bill gave permission for states to develop hemp programs. The Florida Legislature passed a bill in this year’s session allowing hemp growing, and the Department of Agriculture is in the early stages of establishing guidelines for the industry.

Though no licenses have been issued yet to commercial hemp growers, Green Earth and another company gained permits to begin cultivating crops for research. In partnership with Hook-R Farms, the company planted three strains of hemp in Alturas — cherry citrus, sweetened and BaOx.

The plants were all cuttings about 6 inches tall and cloned from specimens grown in Kentucky, said Scotty Wright, director of cultivation for Green Earth Cannaceuticals. Six weeks later, the tallest plants appeared to be about 18 inches high. The plants occupied rows of raised beds covered in plastic.

Henry Hooker, 54, said he entered the citrus business in 1988, planting a grove in St. Lucie County. Hooker, who lives in Vero Beach, started his own company in 1998 and brought the Alturas property about a decade ago.

Like many growers, Hooker has grown discouraged by the problems plaguing Florida’s citrus industry, including citrus greening disease and declining prices. He said he received “horrible” prices for oranges he sold to juice companies this year, and one company said it wouldn’t accept any oranges next season.

“We were trying to find another way to continue in planting; as you can see, citrus is no longer viable,” Hooker said. “So we had to make a decision, and thank God I ran into that man over there” — he pointed to Burgett — “and my sister and I’s lives have changed ever since.”

Henry Hooker said he had once had the property planted with 250 acres of citrus trees. That has shrunk to three acres of Minneola oranges in a grove that abuts the field of hemp. Hooker also raises some cattle and produces hay.

The hemp cuttings planted in Alturas are all female, but Wright said the growers will transform some into male plants by inflicting stress that causes them to produce male characteristics in a bid to reproduce. The farm sits atop a hill, and Wright said he’s optimistic the winds will allow natural pollination of the crop.

Burgett previously worked in the medical marijuana industry, and he looks the part. He wore a camouflage bandana over his head, silver hoop earrings and a chartreuse shirt with his company’s logo on it. He has a long beard contained by two bands, and a tattoo of a marijuana leaf on his right hand.

After working in other states, Burgett returned to Florida and planned to resume working in the medical marijuana industry when he learned about the legislative efforts to start a hemp industry.

“I believe it’s a much larger industry than both recreational and medical cannabis combined,” Burgett said. “Not to sound greedy, but it’s a very dynamic business and has great potential.”

Recreational use of marijuana is not legal in Florida, but advocates are pushing a constitutional amendment to overturn restrictions on general pot use.

Burgett said this year’s hemp crops are part of an experiment intended to show that the plant can be grown in Florida, where the hot and humid environment differs greatly from those of other states where hemp is grown.

“This is awesome,” Burgett said Friday. “We’re really happy they’re looking the way they are, especially as late as we got them planted. I wouldn’t advise anybody to plant anything later than the middle of July, and we’re planting at the beginning August, which is right at the beginning of flower season.”

Indeed, during the tour, Wright pointed to a plant only about 8 inches high that had produced flowers. He said the plant had already completed a life cycle accelerated by the stress of late planting and heat.

“This is basically just practice to show hemp can be grown in Florida,” Burgett said. “We just want to get plants in the ground growing and help alleviate some of the fear.”

He meant the trepidation of citrus growers who might be considering a switch to hemp once the Department of Agriculture establishes rules for the commercial industry. One local citrus grower at Friday’s tour listened intently to discussions among Burgett and state employees but didn’t want to go on record as a potential hemp grower.

The gathering included Darrin Potter, until recently vice president of production for GrowHealthy. Potter, who previously worked with Burgett, is now a consultant affiliated with the Florida Hemp Growers Alliance.

Potter spoke of wanting to make sure citrus farmers who switch to hemp aren’t “exploited” by companies selling seeds for strains of hemp not suited to Florida’s climate. Cultivating the wrong variety can yield plants with THC levels that exceed the state’s 0.3% threshold, he said.

While Florida’s climate creates challenges for hemp production, Potter said conditions here make it possible to grow more than one cycle of crops a year.

Along with the change in federal guidelines, the surging popularity of CBD products has spurred enthusiasm for hemp in the agriculture community. The other compound in cannabis with therapeutic properties, CBD, is used in a range of products, from tinctures to creams, that are purported to alleviate anxiety and pain and enhance sleep, among other claimed benefits.

Stores specializing in CBD products have emerged in recent years in Polk County and around the country. Because the products are labeled as containing less than 0.3 percent THC, no medical approval is required to purchase them.

The hemp plant, though, has been cultivated for thousands of years and offers many other potential uses. The stalk’s fiber can be used to make rope, canvas and linen.

Hemp seeds are edible and high in protein. They can be eaten raw or compressed into “milk.” And oil derived from hemp seeds has a variety of commercial uses.

A recent report projected that the CBD market would reach at least $16 billion in the United States by 2025. Florida Agriculture Commissioner Nikki Fried, a former lobbyist for a medical marijuana company, has said she wants Florida to become a national leader in hemp production.

During Friday’s tour, Burgett and others frequently invoked the names “Nikki” and “Holly” — the latter Florida’s newly named director of cannabis, Holly Bell.

Henry Hooker said hemp has renewed his zeal for agriculture.

“It’s going to be an exciting road to travel down,” he said. “I haven’t been this excited to come to the farm in years. It’s very depressing to come to an orange grove dying of greening and you can’t make any money.”

Hooker said hemp is also stirring excitement among younger members of longtime agriculture families. He said he would host a tour the next day for a group of 20-somethings.

“The young people … that weren’t thinking about going into agriculture, I’m meeting them here at the farm and they have greenhouses ready to go,” Hooker said. “Their fathers were in citrus or are still in citrus, and they weren’t going to be in citrus or agriculture, period. I think industrial hemp is going to give such an opportunity to get younger people’s interest back in Florida agriculture again.”

Senate to vote on hemp, but funding still in doubt – Kotatv 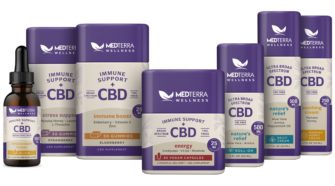 Is Medterra a Publicly-Traded Company?