You don’t need me to tell you CBD is everywhere these days. Various stores sell it, people incorporate it into their lifestyles, and doctors recommend it as medication to various ailments. But as CBD explodes across the country, cops have struggled to keep up in their ability to accurately test whether a CBD product is derived from hemp or marijuana, as well as how much THC that product contains.

According to NBC Washington’s News4 I-Team, this has resulted in struggles for consumers detained by law enforcement. Just this month, cops arrested a Grandma at Disneyworld for admitting she had CBD oil on her. Those cops alleged the oil contained THC, hence the arrest.

But therein lies the problem. Testing if a product has THC isn’t enough to qualify if someone is worthy of arrest. Because while marijuana typically contains high-level amounts of THC, CBD products still contain trace amounts of THC, regardless if it’s derived from hemp or marijuana.

The testing technology “is woefully behind the where it needs to be,” James Moody, an attorney specializing in cannabis law, told NBC Washington. “I don’t think anyone anticipated the rise in the use of CBD.”

“Judges are being told that [a] product is being field tested and is coming back positive for THC, and that’s factually incorrect,” Moody added. “They very well could be possessing nothing other than CBD, which is completely legal.”

Most state laws allow for hemp-derived CBD products, thanks to the 2018 Farm Bill loophole. So long as the CBD products contain less than 0.3% of THC, it’s legal. But, as NBC Washington reports, it’s “unclear whether major law enforcement supply manufacturers are working to develop a test that can distinguish between CBD and marijuana.”

This can result in various false positive testing, which can land consumers in jail who are otherwise obeying the law. And while some forensic labs can do qualitative testing to determine whether a product like cannabis oil contains more CBD than THC or vice versa, the field test cops perform cannot. So while CBD may be everywhere, it doesn’t mean that it’s safe to bring everyone. Maybe it’s best to leave your products at home for now if you don’t want to risk being on the receiving end of a false positive test.

Hemp CBD food products not allowed in Washington – The Spokesman-Review 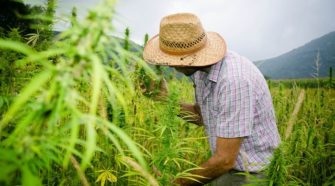