Change in state law brings an uncertain future for Ohio’s drug dogs, who can’t be retrained to stop reacting to marijuana and hemp, which smell identical.

Can you teach an old dog new tricks? And is it worth it to try?

Those are questions police departments across the state will be forced to ask themselves, now that Ohio’s new hemp-legalization law has cast a cloud over drug-sniffing dogs’ ability to provide “probable cause” to conduct drug searches.

Get the news delivered to your inbox: Sign up for our morning, afternoon and evening newsletters

Because marijuana and hemp are both from the cannabis plant and smell identical, dogs can’t tell the difference, so both the Ohio Highway Patrol and the Columbus Division of Police are suspending marijuana-detection training for new police dogs to uncomplicate probable cause issues in court.

Once a dog has been trained to detect a certain narcotic, they can’t be retrained to stop reacting to that odor, Cvetan said. As for the 31 narcotic-detection canines currently deployed by the patrol, “we are evaluating what impact the hemp legislation may have.”

Most dogs are trained to hit on more than one drug — including heroin, cocaine and methamphetamine. But they react the same way no matter which drug they smell, Cvetan said.

That means officers have no idea if the dog is hitting on legal hemp or heroin, said Dan Sabol, a Columbus criminal-defense lawyer.

Sabol compared the situation to a dog trained to detect both illegal drugs and fast food, with police using any dog hits on either as the probable cause to search someone on suspicion of illegal drugs.

“Do you think that would be sufficient to conduct a search?” Sabol said. “Of course not.”

The Fourth Amendment to the U.S. Constitution establishes the “right of the people to be secure in their persons, houses, papers, and effects, against unreasonable searches and seizures,” requiring probable cause, or sufficient knowledge to believe that someone is committing a crime, before police can conduct a search.

“From a practical standpoint, (marijuana) is the vast majority of hits,” Sabol said. “That’s the most commonly used drug of abuse — or maybe not of ‘abuse,’ depending on the circumstances now.”

Those new circumstances include that about 45,000 people in Ohio have received a recommendation from a doctor to use medical marijuana.

In a memo sent Wednesday to his officers, interim Columbus Police Chief Thomas Quinlan said the department’s “K-9 units will be releasing new policies and procedures so we limit hits on cars that might be THC based. I had already directed the next 2 K-9s we train will not be certified to alert on THC.”

Quinlan’s memo was in response to Columbus City Attorney Zach Klein announcing Wednesday that he will no longer prosecute misdemeanor marijuana possession citations, citing an inability of crime labs to distinguish hemp from marijuana. All pending cases were dismissed.

Klein’s office laid down new rules on searches in a memo sent to police on Wednesday, including that “a vehicle may not be searched solely because a K-9 trained to alert to marijuana, alerted to the vehicle.”

If a police officer smells “suspected burning marijuana,” this is still probable cause for a search, because “it is exceedingly unlikely anyone is smoking hemp,” the memo said. But “if the person claims they are smoking hemp,” the officer should assess the totality of the circumstances.

And when police officers smell what they think is raw pot, “this is far more legally problematic because there is no way for an officer to discern between the odor of raw marijuana and the odor of raw hemp.” Therefore, an officer smelling raw cannabis alone is no longer probable cause for a search, Klein’s office advised, noting that these are all “legal guesses,” as “there is no relevant case law in Ohio.”

Rebecca Gilbert, search teams coordinator with the K9 Global Training Academy in Somerset, Texas, said retraining police dogs to stop giving hits on cannabis, while possible, wouldn’t be cheap or easy — and depending on the dog, might not work at all.

Basically, trainers would have to stop using positive prompts as rewards for finding pot — after a dog has already been raised to believe that is a very positive thing to find, she said.

“A dog that’s been trained on marijuana for a couple years, it’s going to be very hard,” Gilbert said. “That initial odor that they’ve been trained to use, that’s embedded.”

During a recent training session where dogs searched lockers at a Texas high school, one of Gilbert’s pot-sniffing dogs hit on CBD oil, she said. The hemp law made CBD legal in Ohio and it is being sold at gas stations and other retailers in Columbus.

Police dogs are going to be detecting these legal products because if a dog can pick out 2 grams of marijuana in a car, “imagine 45 bales of (hemp) in an 18-wheeler,” Gilbert said.

Quinlan’s memo went into other problems with Ohio’s hemp law in addition to the dog-training issue.

Under the new state law, cannabis that is less than 0.3% THC, the intoxicating ingredient, is now considered legal hemp, which until 1937 was routinely used to make rope, clothing and other products. Columbus police do not currently have equipment to test the level of THC, so they can’t currently say what is hemp and what isn’t.

“The equipment needed to conduct this test costs $250,000,” Quinlan wrote in his memo. “Doesn’t make sense for a $10 citation,” the new Columbus fine for less than 3.5 ounces of pot. 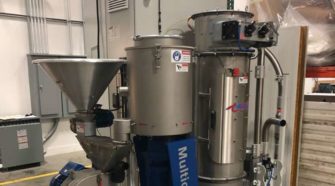