Industrial hemp that is being grown by Midwest Hemp at one of its Oklahoma locations. [PROVIDED BY KARI COOPER/KC PHOTOS]

Interest in industrial hemp grew like a weed in Oklahoma this year.

They also planned to grow the crop using 324,202 square feet of space inside greenhouses or other growing facilities, compared to the 80,000 square feet of inside space licensed for growth in 2018.

Officials said the explosive growth in interest is tied both to current economic conditions, where growers are looking for crops with a better cash return than wheat, and to expectations they will be able to grow industrial hemp starting next year with far fewer hassles than they experience today.

“The reality is, people are trying something different,” said Kenny Naylor, food safety and consumer protection services director at Oklahoma’s Department of Agriculture, Food and Forestry. 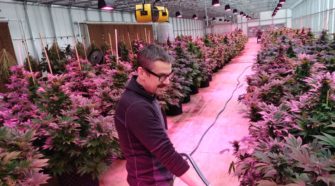