RUSSELLVILLE – When a Logan County sheriff’s deputy stopped a car suspected of carrying stolen hemp crops, a passenger reportedly said he believed the plants were marijuana.

Matthew Gilbert, 22, and Lee Anthony, 31, both of Franklin, are accused of stealing the crops from Coleman Farms, a licensed hemp grower about eight miles east of Russellville.

The pair appeared Thursday in Logan District Court on multiple charges, and preliminary hearings for both men were reset for Nov. 1.

Anthony and Gilbert were arrested early Oct. 3 after the Logan County Sheriff’s Department responded to a call of a theft in progress on Wash Gunn Road, court records said.

“The caller advised he had trespassers on his property stealing his hemp crops,” Deputy Debbie Belcher wrote in a pair of arrest citations.

The person who reported the theft described a car carrying multiple occupants, with the driver returning to pick up someone who had been previously dropped off and turning onto Ky. 96.

Belcher stopped the car on Wash Gunn Road and saw three plants in the car’s back seat, court records said.

“Other plants were located on the shoulder of the roadway where they had been removed from the farm and had been dropped while trying to leave the scene,” Belcher said in the citation. “Gilbert stated he did not know it wasn’t marijuana.”

Anthony and Gilbert are each charged with trafficking in industrial hemp (greater than five pounds), theft by unlawful taking (more than $500 but less than $10,000), third-degree criminal mischief and failure to wear seat belts.

Anthony was also charged with having no operator’s license.

Operated by Mike and Kim Coleman, Coleman Farms is one of two farms in Logan County licensed to grow hemp, according to the state Department of Agriculture.

Numerous farms statewide participate in the Kentucky Industrial Hemp Research Pilot Program, which the state agriculture department established in 2014 as a way to position Kentucky as a leader in the hemp industry.

As of the end of September, 6,700 acres of industrial hemp have been planted statewide this year in 73 counties, according to state records.

Hemp, long considered a controlled substance under federal law, is on the brink of legalization through companion bills introduced this year in Congress by Kentucky lawmakers U.S. Sen. Mitch McConnell and U.S. Rep. James Comer.

While hemp is not genetically distinct from marijuana, it contains a negligible amount of THC, the psychoactive compound responsible for the high that marijuana users feel.

Under Kentucky law, people without a state-issued license cannot cultivate, handle, process or market industrial hemp or the materials derived from it, and the penalties mirror those relating to state laws governing marijuana.

Next 4Front Raises $31M In Oversubscribed Funding Round 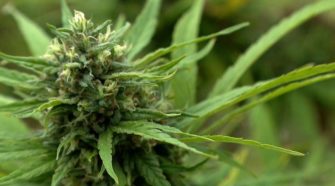