It’s nice to kick off the legislative session with a bit of news that could be a boon to South Dakota’s farmers.

How big? Only time will tell. Maybe boon isn’t even the right word.

Heck, maybe the emphasis should be on the words “could be.”

But we’re encouraged that Gov. Kristi Noem has eased her opposition to raising industrial hemp in South Dakota. In a note sent to state lawmakers this week, she said she would not veto a bill allowing hemp to be grown as long as it addresses a series of concerns, including that:

Growing or possessing hemp amounts consent to inspection and search of the crop. The state can also seize and destroy unlawful hemp without liability.The sale or use of hemp and its derivatives for smoking is prohibited.Regulations concerning the licensing, reporting and inspection of hemp must be, at minimum, compliant with U.S. Department of Agriculture standards.There will be fees to cover an annual license and inspection, and a permit will be required for the transportation of hemp in South Dakota.Legislators come up with a way to pay for the hemp program. Noem’s office estimates it would cost $1.9 million to start it and another $1.6 million to run it. That includes the hiring of seasonal inspectors and two Department of Health lab chemists.

So there are some caveats. But this is a move in the right direction.

State lawmakers will consider a bill that would allow people to grow hemp if they have a minimum plot size of five acres and keep the THC level of the plant below 0.3%. THC is the compound that produces a high in marijuana.

The Legislature approved a similar bill last year, potentially clearing the way for farmers to grow industrial hemp, but Noem vetoed it.

Now, she said, some of her concerns from last year have been addressed. She cited the creation of guidelines by the USDA and suggestions and ideas put forth by a legislative summer study.

It’s hard to know how much of a financial benefit the growing of hemp might be for South Dakota farmers. But at least now they appear to be on their way to level footing with ag producers in 46 other states where it’s already legal to grow industrial hemp.

Agriculture commodity prices have been in the tank for a few years now, hindering the industry that drives our entire state. Anything we can do that reasonably opens up new markets for our farmers and ranchers is helpful. The better they do, the better we all do. It doesn’t matter whether you live in Aberdeen or Sioux Falls, Timber Lake or Britton.

Legalizing the production of industrial hemp is not likely to solve all of our farm and ranch financial problems. But the governor’s announcement has the potential to offer some relief. And that’s a good thing.

“Given all that we need to accomplish this session, if we can get this done in the coming weeks, it would be a good way to kick off this year’s legislative session,” Noem said in a statement. 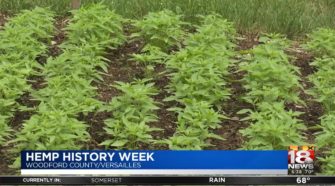