“We’re pleased to be in compliance with the OTCMarkets ‘Current Pink’ Tier,” stated StereoVision’s CEO, Jack Honour, “Management’s next aim regarding SVSN’s trading tier is to become compliant on OTCMarkets QB.”

“Towards that goal,” Honour continued, “we’re excited to welcome to StereoVision’s Board of Directors two dynamic entrepreneurs integral to our expansion plans: hemp industry veterans Rico Garcia, and Tom Varga (bios below). Mr. Varga’s also stepped in as CEO of the hemp industry REIT company that StereoVision launched, Amalgamated Agricultural Properties Inc (AAPI) to replace Lorne Saltzman, who resigned from the StereoVision Board and as CEO and Board member of AAPI to attend to personal matters. We wish Lorne all the best and thank him for his efforts. On the StereoVision Board of Directors Rico and Tom join licensed Tennessee hemp farmer, Herky Williams, Washington hemp industry pioneer, Kevin Hodge, California real estate broker, T. J. Culbertson, MIM, and me.” http://stereovision.com/information.php

Tom Varga – For the last two years, Tom has traveled nationwide studying and learning about the hemp industry. He met and works with farmers, extraction facilities, and hemp extraction equipment manufacturers. Tom started his finance career in 1989. His experience includes REITs, hedge funds, hard money, residential and commercial financing. He founded Diamond Steel Construction in 1994. In 1992 he revolutionized the process of purchasing homes by creating the pre-approval program, which today is a conventional methodology. Tom works with the best CBD equipment manufacturers and oversees and operates top of the line commercial CBD extraction systems getting insights into upcoming technology advancements in the Industry. With a background in running effective and efficient companies, Tom brings a comprehensive set of acumen and an analytical understanding of markets, sub-markets, and the operations of a business to maximize revenues, income, and equity.

Rico Garcia – Mr. Garcia brings an exceptional wealth of knowledge and experience in hemp cultivation, cultivation equipment, and manufacturing, going back to 2000. As chief research and development officer, he researched and monitored state and local policy, enforcement regulations, and managed the acquisition and merger projects including how to fund, oversee and implement manufacturing and retail operations. He has substantial industry contacts and many media contacts from years of lobbying and advocacy work. The bulk of his expertise was first derived from his role as a MMJ patient, caregiver, dispensary owner in Colorado, and also because he was heavily involved in the foundations of legal medical and recreational marijuana, and later hemp. He represented many of the founders of marijuana commerce in Colorado. Through his many personal relationships, he has direct access to decision makers who went out from Colorado to start marijuana and hemp businesses in the U.S. He possesses a strong understanding of the policies and the players on a local and national scale. Owner/President, 2014 – Present, a plant-based Lifestyle Company. ReddTaylor Holding Company LLC – 2013 – 2014 – Chief Research and Development Officer. C.A.R.E, Denver, CO President, 2012 – Present CEO of a 501C4 Non-Profit Organization that advocated MMJ patient rights, lobbying for responsible regulations for all uses of cannabis. ACT4CO, Vice President, 2011 – Jan 2012 served on both the CO. Medical Marijuana Board sub-panel and the legislative subcommittee where he helped draft rules pertaining to cultivation and safety standards to promulgate HB1284.

Safe Harbor Statement: Except for historical information certain statements in this news release may contain forward-looking information within the meaning of Rule 175 under the Securities Act of 1933 and Rule 3b-6 under the Securities Exchange Act of 1934, and those statements are subject to the safe harbor created by those rules. All statements, other than statements of fact, included in this release, including, without limitation, statements regarding potential plans and objectives of the Company, are forward-looking statements that involve risks and uncertainties. There can be no assurance such statements will prove accurate and actual results and future events could differ materially from those anticipated in such statements. The Company cautions these forward-looking statements are qualified by other factors. The Company undertakes no obligation to publicly update any statements in this release. 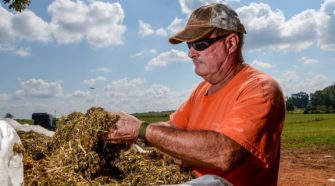