Shani Coleman didn’t expect to build a career in the hemp industry when, at 23, she moved from Nebraska to Colorado to study painting. But after graduating, Coleman took a job at a medical dispensary in Fort Collins, and began learning about the multifaceted cannabis plant.

A few years later, the 2014 Farm Bill passed, legalizing the growth of the hemp plant strictly for research (the 2018 Farm Bill finally slashed that caveat, making the crop more accessible for farmers). American farmers hadn’t grown hemp since World War II, and Coleman saw the huge opportunity this new development posed for US agriculture. Although hemp products, like marijuana, are derived from cannabis plants, they have extremely low levels of THC—the psychoactive compound in marijuana that gets people high—and a staggering range of uses, from rope to textiles to food to plastics to medicine to fuel.

In 2014, Coleman, and her business partner Damien Farris moved to Eaton, Colorado, and partnered with Colorado State University on a research project called phytoremediation—using hemp to clean up chemicals like selenium from contaminated lands. The experience led to them found a commercial hemp company—growing and harvesting hemp for food and oil—called Colorado Cultivars. While Coleman and Farris farm 50 acres in Eaton, they also partner with about 10 fellow farmers in the region who grow industrial hemp on 3,000 more acres. They plan to expand to 5,000 acres in 2020. And although their leased lands aren’t certified organic, Coleman and Farris embrace organic farming practices to create their CBD oils, and to harvest hemp seed for businesses like Patagonia Provisions.

Sierra sat down with Coleman, a female farmer who’s spent her entire agricultural career cultivating hemp, to learn more about this burgeoning industry.

Sierra: Can you tell us more about Colorado Cultivars, and the role you played in its establishment?

Shani Coleman: I’m one of the co-founders. In the beginning, we purchased plants from another hemp company that ended up being over the legal limit [0.3 percent THC levels]. So that was a bust and we had to go in a different direction. My partner, Damian, found some feral hemp plants while driving around eastern Colorado—I’m guessing leftover from World War II—and he brought those back to the firehouse, where we had our first indoor hemp grow.

We started in our 8,000-square-foot greenhouse around Christmas that year. We had about two pounds of seeds, growing indoors. We got a couple hundred pounds of seed off of that, and then we planted 293 acres of hemp outside in 2015. We’ve been growing ever since.

What are the benefits of growing hemp over other cash crops like corn, soy, or wheat?

Where we live, there’s a lot of cattle and corn, so hemp offers diversity. There are many untapped markets for what you can do with the crop itself. We could make plastics or fuels. It can be used as a remediation tool. Our interest in using hemp as a remediation tool came after the flooding in 2013, where we saw animals grazing on land that had been contaminated by an oil storage tank that had toppled in the flood. Conventional farming also produces a lot of runoff and chemicals. Hemp has the ability to help heal some of those lands. It’s a great rotational crop, and the registration [by farmers to grow hemp] has about doubled this year. It’s gaining a lot of traction.

Can you tell us about how you process hemp from the plant to the product?

Well, the equipment still needs to catch up with the industry. There’s not a ton of equipment that’s hemp-ready, so we’ve had to modify things. It’s taken a lot of critical thinking and brainstorming to bring in the crops in the best way with the least amount of loss.

For example, we use a modified combine on the grain fields, collecting the hemp flower in a wagon as we’re going. The grain is stored up top, while the fiber and hurd is shot out onto the ground. Once that material is brought back in the wagon, we take it and we wet bale to preserve it until we can get it dried. The grain goes through a dryer to get it down to the right level of moisture. Once it’s clean, we send it off for further processing so it can be used for food or pressed for oil or protein powder.

With high CBD fields it’s a little different. It depends on what the fields are like. [Agricultural] weed  pressure has been a pretty serious issue over the years so it doesn’t really make sense to combine a high CBD field because then you’re getting all those weeds. We have different methods, but all of our high CBD fields are processed into oils on site.

How would you like to see the hemp industry evolve?

There needs to be more education and accurate information about the crop itself. Education for law enforcement is crucial, and also a clear understanding of the market price for individuals looking to get into the industry would help people make more informed decisions. There needs to be more transparency and a level playing field. We need to make more of an effort to help each other as opposed to being in competition. There’s room for everybody.

Can you talk about your impressions of the gender divide in the hemp industry?

Women are definitely making themselves heard and getting their voices out there and that is fantastic. But it’s the cannabis industry in general. I have been in the cannabis industry for nine years now and have found that it is a predominantly male industry, and although it’s been moving towards more of an equal balance, from a farming standpoint, it’s predominantly men who are in those roles. Women still face barriers, like being taken seriously and being the minority in the room.

“I have been in the cannabis industry for nine years now and have found that it is a predominantly male industry, and although it’s been moving towards more of an equal balance, from a farming standpoint, it’s predominantly men who are in those roles. Women still face barriers, like being taken seriously and being the minority in the room.”

According to USDA Census Data, over the last five years, the number of female farmers rose and now make up 36 percent of all farmers (a 27 percent increase from 2012). Over half of all farms have at least one female producer. Do you see that reflected in your own farming experience?

As far as my experience, I don’t feel like I’ve really seen that. I also saw that statistic, and from the information that I’ve read, they’re including women engaged in day-to-day decisions with an emphasis on record keeping and financial management. While administrative roles are essential to any farm operation, I do not see them as being one in the same— I’m in the field, I’m in the greenhouses, I’m getting the plants ready, I’m helping plant. Because I’m on the farm all the time, I don’t get a chance to meet a lot of other farmers. They’re busy doing the same thing I’m doing.

So I have some questions about the accuracy of it, and I also hope that the numbers are accurate. Women bring a lot to farming, and it’s great to have that diversity and that balance. Right now 80 percent of our grow team is female and I love it. There needs to be more opportunity for women to get into this space. I see it especially in the county where we live. According to the 2012 census for Weld County, 620 women were listed as principal operators, while men were at 2,905.

Do you find that female farmers hire more female workers?

I’ve been trying to get a manual labor job [on a farm or in construction] since I was a teenager, and I’ve never been given that opportunity. Once I created the space for myself, I felt that it was really important to extend that opportunity to other women who wanted to be in this space. I think it’s something I’m more open to and receptive to, and I want to empower other women.

There’s a couple of women [from Colorado Cultivars] who have left to do testing and research in the cannabis industry. One of the women that still works for us—she worked on the farm for a couple years—is now doing all of our formulation. It’s a pretty important role. And we have another woman who takes care of our compliance and our organic [certification], which is really intense. I feel really good about what all these women have gone off to do.These women are doing amazing things in the industry and I respect and admire them.

What are your goals as Colorado Cultivars, and the hemp industry, grow?

When we first got to Eaton, we struggled because there were conventional farmers who wouldn’t even talk to us, or who got angry, when we talked about organic farming. But when Damien and I started this we wanted to do something positive that would benefit the community and the environment. We wanted to help farmers bring hemp back into agriculture, so farmers could make money while healing the land. We wanted to help people get on that path to organic growing, and to see why organic growing is valuable. I think we’re finally starting to achieve that. 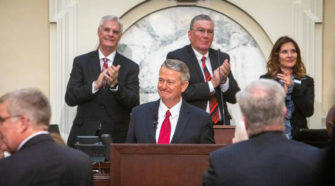 Texting while driving? Hemp? Property tax relief? What the 2020 Legislature did, or didn’t do – East Idaho News