The Buckeye State is among the first to receive federal approval for a statewide program to cultivate hemp.

Drive through southern Ohio next summer and you might be surprised to see acres of cannabis plants swaying in the breeze.

These bushy annuals won’t be the kind that produce marijuana. Farmers are hoping to grow hemp, and industry experts think a few thousand acres could be in the ground by springtime.

“It’s crazy and exciting and confusing and the whole bit, but I think that comes anytime you start planting a new crop,” Ohio Farm Bureau Federation spokesman Ty Higgins said.

Hemp has been around for thousands of years, but the federal government classified it as a Schedule 1 drug alongside its psychoactive cousin, marijuana, until the December 2018 farm bill. That law re-defined cannabis with less than 0.3% THC (the compound that makes people feel high) as an ordinary agricultural commodity.

Republican Gov. Mike DeWine signed a bill into law to create a hemp licensing program this summer. Then, the Ohio Department of Agriculture drafted rules and submitted them to U.S. Department of Agriculture for approval, which was received just as 2019 came to close. All that’s left before the state starts issuing licenses to farmers is for state lawmakers to sign off on the regulations at a meeting on Jan. 16.

“There was candidly a lot of concern that Ohio would lose out on the 2020 growing season just by how long it takes to put rules in place. This is a real testament to the hard work the folks at ODA did,” Haren said. “They really set Ohio up to be what we hope it will be, which is a leader in the hemp industry.”

Most of the U.S. hemp market today centers on products that include a non-psychoactive compound found in cannabis plants called cannabidiol, or CBD. People use it to treat everything from epilepsy and autism to chronic pain and anxiety. (The Food and Drug Administration has only approved one CBD-based drug, Epidiolex, for the treatment of certain seizures.)

Still, the CBD market is booming, and Brightfield Group, which tracks cannabis markets, predicts it will reach $22 billion by 2022.

Haren said he didn’t know whether CBD products would remain popular long-term. He thinks industrial hemp is the future for Ohio farmers and processors.

“Look at all the plastic bag bans. Why not make an alternative out of hemp,” Haren said. “Every day, I’ve got cardboard boxes outside my door. Why not hemp boxes? It takes weeks to mature versus trees that take years.”

And it’s more profitable to grow.

Hemp can be up to four times more profitable than corn or soybeans, which is why Higgins said you can’t go to a meeting of Ohio farmers without the subject coming up.

Still, he said, farmers are cautious about saving more than a few acres of their fields for the new crop.

“We don’t know how it grows in Ohio. We don’t know where our market is yet,” Higgins said. “That’s one thing that’s a little different than corn or soybeans.”

Ohio grows about 10 million acres of corn, soybeans and wheat that gets shipped out across the globe, but hemp is different.

The market is emerging — especially in America — and processors are still figuring out which varieties of hemp work best for which purposes.

“There’s going to be a lot of trial and error this first year,” Higgins said. ”I tell them they should only invest what they are willing to lose when it comes to the 2020 planting season.”

Farmers planting hemp this spring are going to be test cases both for cultivation and regulatory enforcement.

“This is new territory for every state in the nation,” ODA Director Dorothy Pelanda said.

Ohio, she said, is giving its farmers: a license to grow hemp and a database entry that will prove to anyone who pulls them over that the cannabis plants in the back of their truck are, in fact, hemp.

“From the start we have been working very closely with law enforcement,” Pelanda said. “They’ve traveled to other states so they can learn along with us.”

One idea from Colorado that Pelanda said she’s considering is mandating hemp processors be bonded. Another idea was to create a list of legal seeds rather than a list of illegal ones.

Julie Doran, founder of the Ohio Hemp Farmers Cooperative, said the list of allowable seeds is probably going to be too short.

Marijuana and hemp both contain THC, but Hemp can’t legally have more than 0.3% THC on a dry weight basis. It’s like a bottle of non-alcoholic beer. O’Doul’s, for example, contains 0.4% alcohol.

Marijuana has an average THC content of about 9.3%, according to tests by the National Institute for Health on confiscated cannabis samples from around the country. But states like Colorado where recreational marijuana is legal have reported strains testing as high as 28%.

Only a handful of cannabis seeds, she said, produce plants with a THC content that meets both state and federal legal limits for hemp.

“You’re also talking about a plant where you can’t completely control the outcome,” Doran said. “Plants grown in the same field could have different THC contents. Maybe one gets flooded or gets stressed. That THC content could ’run hot’ (go higher than the legal limit).”

And anything that tests above the 0.3% limit has to be destroyed.

Doran would like to see a measurement of uncertainty passed by USDA that would let some plants test up to 1%.

Haren’s concerns were about the 15-day harvest window. The law says farmers have 15 days to get all their hemp out of the ground once its tested. The THC content of cannabis plants varies over time, so federal regulators created this window to make sure levels don’t change.

But it might be too short given that the time period includes the days spent waiting on test results.

“You may not want to go through the process and harvest all that product before you’e got your numbers,” Haren said. “From an industry standpoint, there’s a lot of interest in a longer window.”

The USDA is asking for comment on the 15-day rule though, so Haren’s optimistic it could change.

“We’re building a new industry,” he said. “Every decision you make leads to about 20 other questions.” 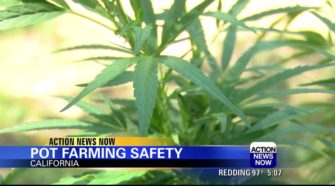