The farm and greenhouse visit was followed by Alex DeFrancesco providing a sneak peek at the farm’s new Stewards of the Land brewery, just a few minutes away at the corner of Forest and Augur roads. Expected to open this fall, it will be the state’s second farm brewery – and the first in Connecticut to grow and infuse its own hemp into one of its brews.  Four years ago, DeFrancesco Farms began growing beer hops, which will also go into their local brews.

On Aug. 21, Joe DeFrancesco III showed his guests some of the different growing processes he’s tried on this first hemp crop, as he figures out what works best. He started the plants from seeds in the greenhouse, making cuttings from some of the seedlings. He experimented with field blankets of white, silver and black plastic to see what helped the plants grows better.

“I have a couple of different varieties and stages of different plantings to find out if an early kind is better than a late planting, and I’m trying different types of feed,” said DeFrancesco. “It’s a big learning experience.”

DeFrancesco Farm will grow hemp during the area’s regular growing season as well as indoors, in an extensive greenhouse space, in winter. In about two weeks, some three and a half acres of mature hemp will be harvested in the DeFrancesco’s fields. Meanwhile, about two acres’ worth of seedlings and cuttings are being nurtured in the greenhouse for a second, all-greenhouse grown harvest that’s expected to mature in December, said Joe DeFrancesco III.

The greenhouses will be used to help dry and prepare hemp for sale; but the DeFrancescos will also have the added advantage of the farm’s experience growing and processing beer hops, which are in the same plant family as hemp. They’ll experiment with using their hops dryer; and also expect that a hammer mill used to process hops will do double-duty transforming woody hemp stalks into heating pellets.

But, as the state is hoping, it will be the dried female hemp flower that will draw commercial buyers. According to information shared by Cohen’s office, it’s estimated an acre of hemp could generate 500 to 1,500 pounds of dried flowers per acre, generating gross revenues of $37,500 to $150,000 per acre. The Hemp Industries Association notes that U.S. retail sales of hemp products totaled nearly $700 million in 2016.

Make no mistake – this stuff looks like marijuana, but that’s where the similarity ends. While hemp and marijuana are both cannabis plants, marijuana produces an abundance of the brain-receptive substance tetrahydrocannabinol, or THC; which is the principal psychoactive constituent of cannabis.

By comparison, industrial hemp produces an abundance of non-psychoactive cannabidiol (CBD), and only a trace amount of THC. In December 2018, the federal Hemp Farming Act was signed into law, removing hemp (defined as cannabis with less than 0.3 percent THC) from Schedule I controlled substances and making it an ordinary agricultural commodity.

Also in 2018, the Food and Drug Administration approved the first prescription CBD medicine, which is being used to treat rare and severe forms of epilepsy. While other federal studies into the proven medical effectiveness of CBD are only just getting underway, purveyors of hemp wellness therapy products are selling items containing CBD.

Earlier this year, CT’s new hemp law, Public Act 19-3, was signed by Gov. Ned. Lamont. The new law launched the pilot program allowing state registered and certified growers to cultivate and market industrial hemp. On Aug. 21, as she stood among the tall, flowering hemp plants set to be harvested soon in North Branford, Cohen was looking at the result of a bill she’d pushed for as co-chair of the senate Environment Committee.

“I’ve been walking through this hemp legislation all session,” said Cohen. “And to see it come to fruition locally, right here in North Branford — to see such fabulous plants, and how they’re going to use it locally here in their beer; and to see the hops being grown, is a great business success story.”

Hurlburt said 80 growers are currently licensed statewide, allowing for a total of about 280 acres of growth. More licensees are being added on an ongoing basis. The Dept. of Agriculture is also using the pilot program to study the outcomes of cultivation, growth and uses of Connecticut-grown industrial hemp.

“I signed some licenses earlier this week. It’s exciting to see how much interest there is,” said Hurlburt. “Being in a conference room, hammering out details, is different than being out here seeing this in full cycle.”

“This kind of farming is really the fulfilment of a vision with enormous promise and potential for the future of Connecticut’s agricultural history,” Blumenthal told Zip06/The Sound. “The combination of hemp and hops, processing the products, and then brewing is kind of a tremendous dream come true for this family; but also in Connecticut. It’s innovation and energy coming together, with new laws working for it. It’s a great step for Connecticut farming.”

At a Connecticut family farm that’s been growing local produce including corn, peppers and tomatoes for over 100 years; diversification has become the key to success, said Joe DeFrancesco III.

“We have to diversify,” said Joe DeFrancesco III.

Right now, the farm’s greenhouses include spaces dedicated to an earlier form of successful diversification, DeFrancesco’s mum-growing operation. Thousands of mum plants will soon be shipped out across New England, said Linda DeFrancesco.

Meanwhile, in another part of the DeFrancesco’s state-of-the art greenhouses, the family is nurturing hundreds of hemp seedlings, which are nearly ready to transplant to a larger growing space that will be cleared out when the mums are shipped. Joe DeFrancesco III said one of the outcomes he anticipates for the green-house grown hemp is that it will have a “faster grow” than the field-grown hemp.

“What we have planted now, we hope to cut at the end of December; so we’ll have a harvest indoors,” he said.

Are You Ready to Grow Your Own Cannabis? Take This Quiz to Find Out!

Sen. Schumer stops in Basom to call for financing guidelines for hemp farmers – The Batavian 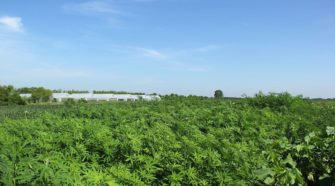