As hemp farmers learn to navigate the landscape, they find few buyers, low prices and an industry rife with bad actors looking to prey upon the naive

Hard realities have set in for New York’s hemp farmers: The predicted boom has turned into an agonizing bust.

The effect is being felt across the state.

In the Broome County hamlet of West Windsor, Jeff Bump has 400 bags of dried hemp in storage with no buyers willing to pay what he needs to cover the sizable cost of his 80,000-pound fall harvest.

In Rome near Utica, Rex Mazur of Skeeterboro Farms left three of his 12 acres unharvested the past fall. The market simply failed to develop for his raw product.

He will plow those fields under as he prepares for next growing season, unsure if he will venture into hemp growing again.

These are just two examples from last year’s New York harvest, but they illustrate the disarray that marks a developing market and the dilemma faced by more than a few of the 400 farmers who dipped their toes into the industrial hemp frontier.

The situation is not unique to New York. Other states where hemp farming has taken hold are reporting a similar predicament.

Rather than developing into a farming panacea, hemp, at least for the short-term, has evolved into a pit of despair, rife with bad actors looking to prey upon the naive.

Multi-million dollar lawsuits from growers and processors, alleging fraud and deceit, can be found in the court dockets.

Industrial hemp has become an alternative crop for New York’s hard-pressed farmers, but it may, at least for now, be producing more hope than results.

The big planting rush came when the federal government removed the non-psychoactive variant — containing less than 0.3% THC content — from the controlled substance list in late 2018. New York has allowed industrial hemp cultivation under an experimental program since 2015.

As more growers seized on the prospect of high returns from a hemp crop, the industry found itself with an abundant supply of raw product and nowhere to sell it — including in New York.

“What we are dealing with is an industry still in its developmental stages,” said Tristan Hujer, an attorney with the Buffalo-based firm, Phillips Lytle, who been been advising hemp clients for the past three years.

Larry Smart, the pre-eminent industrial hemp researcher at Cornell University, predicted a down market last summer when he saw farmers, novice and experienced, jumping on the hemp fad.

Smart said $40,000 per acre prices could not be sustained with the kind of volume he saw coming to the market.

Hemp growers in NY in a vice grip

Growers find themselves in an ever tightening vice grip, squeezed by the hefty costs needed to start the bold initiative, but rarely realizing the thousands in profits they had been expecting to reap from the fledgling but potentially lucrative endeavor.

Instead, growers have put on hold a gainful sideline while the industry catches up, trying to adjust to a plentiful new hemp supply that can be processed into the CBD product that has caught on with consumers.

“Unequivocally, there’s an oversupply,” said Kaelan Castetter of CSG Hemp in Binghamton. “At least half the hemp grown in New York has not found a buyer.”

The industrial hemp derivative, CBD, has been promoted for its claimed curative powers.

The oil extracted from the plant comes in creams, salves and tinctures, many sold at a eyebrow raising cost. The product has been said to ease aches and pains, cure insomnia and a host of other maladies, but evidence that the non-approved substance is effective is still anecdotal.

There are other uses too for hemp fiber such as insulation, fabric and environmentally friendly plastics. But the returns for that raw product are far less, drawing far fewer growers.

More than 3,500 acres of hemp were grown in New York last year, a small fraction of the more than 500,000 acres planted nationwide.

Most growers have one motivation: grow a crop that tests for high CBD content, low THC (the psychoactive ingredient in cannabis that would otherwise make their harvest illegal) and sell to processors that will squeeze the highly sought after cannabidiol from the dried leafs.

Too many permits in New York

There are too many growers and too few processors. Bottom line: Supply chains are non-existent in this new farming frontier.

“So many permits went out the door without an established supply chain,” said Assemblywoman Donna Lupardo, D-Endwell, chairwoman of the Assembly Agriculture Committee who has been spearheading the development of New York’s hemp industry.

Though New York licensed 90 hemp processors, fewer than a dozen are actually operating, and most of those are doing it only for their own needs.

There are too few large scale processors, and ones in operation are woefully under financed, leaving the grower at risk.

The result is a large hemp supply is being warehoused, awaiting processing.

“The business is so young the infrastructure hasn’t developed yet,” said Floyd Bronson, farm manager at Grow Hemp NY.

Harsh markets are a brutal wake-up call for growers who jumped on the hemp bandwagon based on visions of tens of thousands in per acre income, flighty thoughts for those who only years before squeaked by on $600 an acre for a hay field.

A hemp gold rush has transformed into nothing more than a dust bowl of dashed opportunities,

“It’s the wild west out there,” Pell said.

Growers are crunched on both ends of the equation.

Illegitimate seed purveyors are selling low quality supply — at as much as one dollar for each seed.

Where female plants are necessary to produce the source for high-grade CBD, buyers are finding their supply is chock full of inferior male plants. Disputes between seed suppliers and growers are common, companies said.

Growers squeezed on both ends

A New York grower, for example, sued a seed supplier last year when germination rates were below 30%. Replacement seeds were no better, the suit claims.

They were populated with inferior male seeds, which are of no use and pose the potential of ruining the preferred female plants, the source of the prized CBD. The suit is pending.

Meanwhile, a dearth of hemp processors only adds to growing headaches, leaving farmers exposed to less than desirable deals in a desperate attempt to unload the raw product.

“We haven’t found anyone buying it for as much as it costs to grow it,” said Jeffrey Bump in West Windsor. “The farmers are getting totally hosed.”

Added Rex Mazur of Skeeterboro Farms in Rome: “We still have it in the warehouse. We haven’t sold anything. You don’t get into hemp growing to give away for free.”

Nothing illustrates the tumult the industry now faces more than a recent federal lawsuit that pits one of the more experienced industry players against a contracted grower.

Canopy Growth, in a suit filed late last year, alleged that it paid $12 million to Go Farm, a Nevada-based grower that was to cultivate more than 1,000 acres of industrial hemp in western New York. The deal went sour.

Of the 1,115 acres that Canopy contracted for, only 275 acres were viable.

Canopy, in a 43-page lawsuit filed in October, claimed Go Farm was unfit to farm over 1,000 acres of hemp, lawyers from Phillips Lytle wrote in a case summary,

Upon inspection, Canopy discovered unplanted acres, and, in the areas that were sufficient, the crops were covered in weeds.

It further accused one of the principals of using the upfront cash “to buy a personal home in Panama, as opposed to obtaining the required labor and materials necessary to prepare and farm the acres and produce the warranted amounts of hemp biomass.”

For an unknown reason, though, Canopy has since dropped the action.

Though hemp farming rewards are potentially rich, the risks of growing are equally as large.

The up-front costs are significant: Pricey seed, hand planting, almost constant supervision of the crop to cull weeds and male varieties, harvesting by hand, and, finally, hand stripping the plant to isolate the leaves.

“For a business that was supposed to reinvigorate the small farm, it’s having the opposite effect,” Pell said. “It’s not an easy business. It takes a lot of labor.”

High quality industrial hemp that was selling for $40 a pound two years ago was barely fetching one quarter of that amount this past harvest season. And there were few processors who could even come up with the lower price upfront.

Instead, rather than outright purchase, the processors that could accept product were pushing barter type arrangements where they would keep half the oil byproduct and return the other half to the grower.

“Some of the top brands only need five acres of product,” Castetter said. “A lot of people scaled up but the demand hasn’t materialized the way they had expected.”

Even though the 2018 Farm Bill cleared the path for the industrial hemp development, regulations surrounding its use as a commercial product remain opaque, leaving use of the extract in limbo.

The Holy Grail for the industry: Clear direction from the Federal Drug Administration on its use as an additive in the food and beverage industry.

If CBD gets the nod as food additive from federal authorities, the hemp oversupply will quickly be grabbed up by major food and beverage makers expecting to capitalize on market demand for its said health benefits, advocates said.

“I don’t believe this is a pipe dream,” Lupardo said. “This is what happens when you start something new.”

In the interim, those in the industry expect far fewer acres to be planted this coming growing season after last season’s bust.

Those who do choose to plant industrial hemp will be assuming significant risks.

“If you are a legitimate farmer, you’re the ultimate gambler,” Mazur said “You put the seed in the ground and in six months you hope it pays off.”

Mazur and other industrial hemp pioneers are still waiting for the payoff. 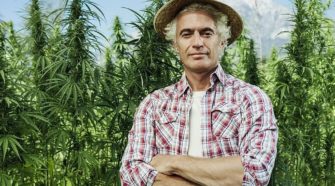