It may look like marijuana, but industrial hemp with CBD is now legal to grow across the country.

Unlike its cousin with THC, hemp won’t get you high.

Instead, many use CBD for pain management, anxiety, insomnia and more.

For the first time, Clarence Laub III can grow CBD hemp after several years of growing the cheaper grain plant.

At about a dollar a seed, this hemp has to be treated with the utmost care. That means getting down on your hands and knees, digging a hole, and putting the plant into the ground by hand.

Clarence’s dad says this is no crop for old men.

“I don’t know if he realizes it, but this stuff all has to come off and it’s all hand labor. I’m not going to be used to that,” said Clarence Laub II. “This is old school, something I don’t want to do.”

The younger Laub says this hemp can be more than 40 times more valuable than the same acre of corn.

“Sometimes you get a lot of the giggle factor in it,” said the younger Laub.

But he says the crop, both CBD and grain, could be a money-making addition to many farmers’ fields. 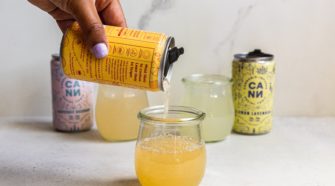 CBD And The Rise Of The Wellness Café