COLUMBUS — New Mexico farmers eager to cash in on the hemp craze the first year they could legally plant the crop say it did not pan out.

“It was like a gold rush,” said James Johnson, a Columbus area farmer.

His Carzalia Valley family farm and produce company is famous for its sweet onions, but, this year, he also planted 142 acres of hemp.

Hundreds got licenses to grow hemp in New Mexico with an eye on the burgeoning market for Cannabidiol, commonly known as CBD, extracted from the plant. CBD is now found in a variety of products promising relief from a wide range of ailments, including chronic pain, insomnia and anxiety.

Many farmers coped with their own anxiety as they struggled with uncertainty of growing hemp in New Mexico.

“I think you would have a hard time finding a grower who made a profit, and if they are, it’s few and far between,” Johnson said.

A hemp plant growing in a field west of Columbus on a sunny September morning. New Mexico farmers were eager to plant hemp this year to cash in on the CBD craze. (Roberto E. Rosales/Albuquerque Journal)

He said his crop yield was lower and the CBD content was not as high as promised by the broker who sold him the seedlings. The price he got was also a third lower than he estimated at planting time, he said.

Johnson was also critical of the Department of Agriculture for the way it managed licensing. He said the greenhouse he wanted to use in New Mexico could not get a license in time to plant so he had to buy from California.

“How supportive is our state when they know that timing is everything?” Johnson asked.

NMDA was flooded with applications. The department so far this year has issued more than 400 licenses, including 276 licenses to grow outdoors totaling 7,540 acres, and 132 licenses for indoor growers totaling 8,334,424 square feet.

“The No. 1 thing we learned is we did not anticipate the level of excitement or the number of people who would actually get licenses,” said New Mexico Secretary of Agriculture Jeff Witte.

The number of hemp license applications was more than double what the NMDA expected for a beginning program, according to Witte.

“There was a challenging year in the state, and quite frankly across the country, because there were a lot of people who jumped into it and basically oversupplied what was traditionally in the market,” Witte said.

There were plenty of novices trying their hand who had to cope with issues all farmers face from labor shortages to pests and weeds, according to Witte.

But even experienced farmers had to deal with uncertainty.

His family has farmed chile in the Hatch and the Mesilla Valleys for four generations. Ogaz planted 20 acres of hemp on the same plot previously used for organic chile.

He and others looked for expertise from neighboring Colorado, which has legally grown hemp since 2014. But there was a problem with that strategy.

“Nobody had ever dealt with hemp in our climate, in our area,” Ogaz said.

“You get so much sun, so much longer of a growing season that that plant is going to react differently in our area than in Colorado, California, Kentucky and in Oregon,” he explained.

As he watched farmers struggle, he and a team started Pharm True, a new company to manage the process from seedlings to processing to sales.

“A lot of inexperienced farmers who had never even farmed an acre in their life were jumping into this hemp game because they thought there was money to be made, not knowing there were some sharks in the water,” said Ogaz.

Ogaz and others said scammers moved in to take advantage of growers. Inexperience also meant some farmers did not produce quality hemp because of moisture, mold, insect damage or chemicals, according to Ogaz. And they struggled to sell their crop or find processors to extract CBD oil.

Others had to destroy part or all of their harvest because the level of THC was higher than the 0.3% allowed under federal and state law. THC is also found in hemp’s cousin, marijuana, but at much higher levels.

The climate, growing season and other stress on the plants meant some developed more THC.

More than 52 acres with approximately 3,927 plants were destroyed because of higher than allowed THC levels, according to NMDA.

NMDA inspectors supervised sampling crops on hemp farms, which are sent to an independent lab for testing. Those who meet the limit get a harvest certificate.

Workers check on hemp plants drying in a produce warehouse at Carzalia Valley Farms west of Columbus. The farm is famous for its sweet onions, but this year farmer James Johnson also planted 142 acres of hemp.

“We had 6- to 7-foot plants full of blooms, full of flowers, but they just didn’t meet the requirement for the state,” said former State Rep. Bealquin “Bill” Gomez of La Mesa.

When he was a member of the Legislature, Gomez sponsored a bill in 2017 to allow New Mexico farmers to grow hemp. Gov. Susana Martinez vetoed the bill passed by lawmakers, but the New Mexico Supreme Court overturned the veto in 2018.

This year, Gomez had to disc under or plow under some of his hemp plants that had THC levels that were above the limit, or “hot.”

“Some of my partners got some seed, and it turned out to be too hot. That was a half acre of probably the best plants in the valley,” Gomez said.

New Mexico farmers near the border area that is a lucrative drug smuggling corridor also had to contend with law enforcement confusion about hemp and its close cousin, marijuana.

“The feds don’t know the difference between hemp and marijuana,” Johnson said. His farm near Columbus is right on the border with Mexico. In September, as he was harvesting hemp, the smell of the crop permeated the fields and filled his large processing shed.

“I got a visit from Border Patrol; they wanted my hemp license, a copy of it, so I gave it to them,” he said.

A young Border Patrol agent, according to Johnson, asked “How do we know you’re not growing the real stuff?” He said he answered, “Why would I risk a 101-year-old legacy growing a crop that I know to be illegal.”

In September, during the harvest, authorities detained one of his workers. The same thing happened to one of Ogaz’s employees at a Border Patrol checkpoint near Hatch.

“Our machine harvester guy, he got hit by the border dogs. They ran through the truck and everything like that,” Ogaz said.

After they saw documents proving he was legally harvesting hemp, Border Patrol agents let him go through the checkpoint.

Despite the setbacks this year, many see a future in hemp.

“I knew this was probably going to be a learning curve. There’s no infrastructure set up yet,” said Hilda Chavez, of NNMCP Consulting.

At her practice in Las Cruces, as a traditional naturopath and Cannibas expert, Chavez works with medical marijuana patients but also sells CBD and other hemp products.

Chavez has been getting high-quality CBD oil from Kentucky, a state that has been growing hemp for years. She would like to use locally grown New Mexico hemp and is a consultant for some New Mexico farmers who ask, “What are the products we can make out of this so we can produce whatever you need?”

She sees a future in hemp beyond CBD with hemp fiber used for clothing, textiles and construction materials, including sturdy “hemcrete” as a substitute for concrete.

Many New Mexico farmers say that, despite the problems, they plan to grow hemp again. Others hope to apply the hard lessons learned this year to another crop they want to plant legally in the near future: marijuana.

“It will be happening, and we’ll look at it. This was a trial run, basically looking at the future of recreational marijuana, recreational cannabis,” Johnson said.

New Mexico’s legislature is expected to take up a bill legalizing recreational marijuana as early as January when the new session begins.

“That could open up even more opportunities for some of these New Mexico farmers just because of how big a market this marijuana thing is becoming. That stigma seems to be fading away,” Ogaz said. 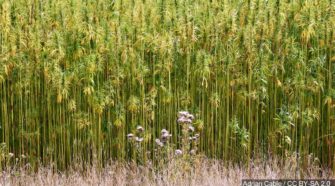